Breaking
The Impact of Internships in Marketing
3 use cases of chatbots for critical services
How To Make Working From Home Appeal To...
Tips on How to Design an Office Space...
4 Tips To Help Build Amazing Customer Relationships
How Are US Pension Funds Responding to the...
Benefits of second-hand cars for your business
4 Reasons Why Your App Needs To Undergo...
Your Guide to Online Marketing
How to find a Solicitor in London
5 car tyre and safety tips for a...
Everything You Need to Know About Corporate Social...
Is Adaptive Leadership the Key to Motivating Employees?
Why business events are set to return with...
Business events set to return with a bang!
Expanding Internationally: 5 Things to Consider for eCommerce...
Home Business Contactless Vending Of Cooked Convenience Meals Comes To Calgary
BusinessEntrepreneurshipStart Ups 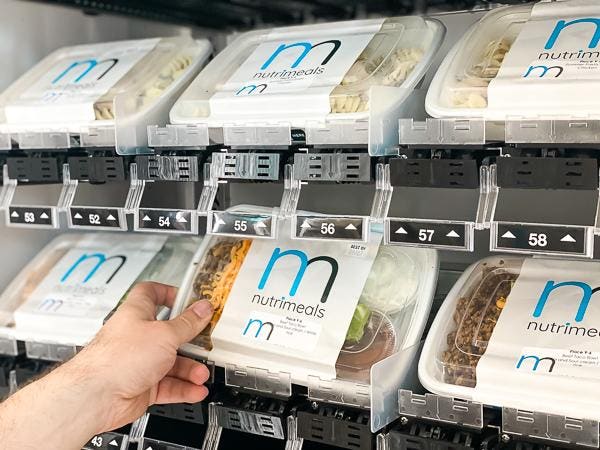 The idea of picking up a ready-prepared, healthy meal from a vending machine in a public space sounds counter-intuitive. After all, most people’s vision of vended food is high-sugar confectionery or chips. But for one Canadian start-up, that idea has become a reality—and evolved into a contactless model, all thanks to Covid-19.

In January this year, before the pandemic struck, Nutrimeals piloted a project to use automated kiosks to sell freshly-prepared dishes using the catchy slogan: Click. Heat. Eat. Repeat. The pilot in Calgary, Alberta proved popular, with some customers beginning to make daily purchases.

Covid-19 rapidly ended that. “Our kiosks relied heavily on foot traffic because they were in downtown office buildings,” the company’s co-owners Grace Clark tells Forbes.com. “Once everyone started working from home, we had to rethink the model. It made us prioritize our app development and move to a contactless vending solution.”

The app, which has just been launched, enables you to see the nearest vending units to your location. If you are feeling peckish you can browse what’s available in that specific machine, place an order and pay for it. This generates a barcode which is then used to pick up the meal.

On average the food items—all nutritionally balanced—cost $10, which is very competitive versus the usual unhealthy fast food options. Dishes such as Beef Taco Bowl, Shepard’s Pie, Dragon Bowl and Mongolian Beef have a shelf life of five days. As a health precaution the company removes any remaining meals on the third day and donates them to local ‘food rescue’ charity, the Leftovers Foundation, which supports hunger relief.

From a pandemic perspective, Clark adds: “Our vending method does not require the user to touch the machine and it is completely contactless. The only things customers touch are the items they are purchasing. This will help with the public’s Covid-19 concerns.”

In Canada, Alberta has almost double the cases of neighboring British Columbia—currently just over 21,000 according to Government of Canada data on October 15. But that figure is dwarfed by Ontario and Quebec, with the latter now at close to 90,000 cases.

With cases continuing to rise rapidly in these larger, more populous provinces, picking up food while having zero contact with anyone could become increasingly appealing. This is particularly so for those who may have returned to offices to work. They do not necessarily want to queue with others at local eateries for takeaway lunches, and ordering in is not always practical in an office scenario.

Nutrimeals can learn from similar businesses. Mindful Chef in the U.K. launched a health-focused, food-box company in 2015. In a recent webinar organized by The Retail Summit, co-founder Robert Grieg-Gran explained how new recruits to the model, who he called ‘corona cohorts’, had become loyal customers, helped by the rapid scaling of a tech platform.

Meanwhile in Sweden, start-up Lifvs has developed ‘unmanned’ grocery stores open 24/7 where users just need an app to shop in them. Co-founder Daniel Lundh, has put the stores in locations ignored by bigger grocery retailers such as sparsely-populated areas. For the elderly and people who don’t want to leave home because of Covid-19, Lifvs has also partnered with local associations for home delivery.

So far, Nutrimeals has just two kiosks at Place 9-6 at 940 6th Ave, and the Parallel Center at 1040 7th Ave, in Calgary’s downtown commercial core and West End respectively. The priority for the company is to recruit new app users and build a loyal following of younger consumers using influencers on social media like Instagram.

The first two weeks saw 50 new users and an immediate sales pick-up. But progress may initially be slow for a novel and untried model like smartphone contactless vending.

Clark also admits that the profitability of each kiosk—and the model itself—relies on multiple factors “some outside of our control” including rent cost structures (profit share versus base rent models), footfall and catchment demographics. Nevertheless, Grace—supported by Nutrimeals’ other co-owner, Samuel Hale—is optimistic that the concept can catch on.

“Nobody has ever been able to order food items from a vending machine on their smartphone before. Based on our forecasts, it is not unreasonable to assume that the kiosks can be paid off and profitable in less than a year,” she says.

Nutrimeals is currently negotiating with owners of residential properties like condominiums and apartment buildings as well as universities in Alberta, to place vending units in high footfall areas.

Scaling up cross-country is some way off, but other Canadian provinces are earmarked. “We are looking to expand into Ontario early next year which will involve a third party co-packing partner,” Clark says.

“We’re basically a personal chef to our customers,” Clark says. “They range in age from 25 to 55 with good disposable incomes. It’s more high-end, with a different focus to say UberEats.” A key difference is that Nutrimeals makes its products, and orders are placed for a whole week. Therefore purchases are pre-planned, not impulse led.

With just two years worth of experience on that side of the food business, the entrepreneurial pair have taken to tech for their next adventure. Clark is convinced that—once the idea of contactless meals vending is established—there are limitless possibilities for new locations including airports, fitness facilities, hospitals and retirement homes.

Keyless Car Crime: How To Thwart The Thieves

U.K. Digital Startup Administrations Are Rising – What Can Be Done?