Breaking
France Off Travel Corridors And FCO Exempt List
Ask Ethan: Why Are The Moon And Sun...
When To See The Moon And The Planets...
IRS-CI Involved In Largest-Ever Seizure Of Terrorist Organizations’...
The Check Really Is In The Mail. After...
Epic Games Vs Apple: Why You Won’t Be...
Senator Kamala Harris Proposed A Bold Tax Credit...
Deal Terms To Reduce The Risk When Buying...
Multiple Sclerosis Drug Shows Promise For HIV Prevention...
The Neglected Piece Of Retirement Planning
It’s No Longer A Viable Option For Capitalism...
Virtual Credit Cards: An Extra Layer Of Protection...
Lessons From The Rainforest: Human Health Leads To...
Four Easy Ways To Bolster Your Company’s Reputation
It’s All About Claims: New Claims Come In...
Does Covid-19 Change How We Look At Digital...
Home Technology Coronavirus Can’t Stop The Beat Of Broadway Podcast Network
Technology 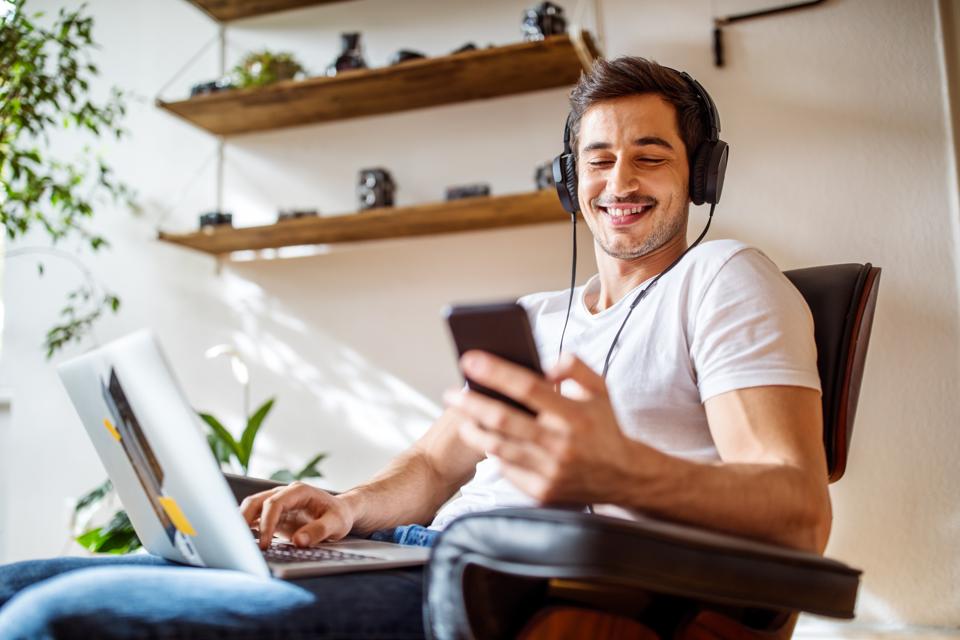 Someone smiling while listening to content on his smartphone.

Broadway Podcast Network seems to be bucking the trend.

As the spread of COVID-19 has forced almost all Americans to stay at home, many podcast programs have seen the size of their audiences shrink. One podcast publisher shared that the number of people downloading its shows has dropped 19 percent over the past two weeks, and Lindsay Graham of the audio production company Airship confirmed that his firm was “down 20 percent across the board.”

Since the start of March, the measurement firm Podtrac found that the total number of podcast downloads has declined about 10 percent. Audience growth for programs has also fallen 15 percent, erasing over two-thirds of the gains in the podcast industry during 2020.

“While that might sound strange, considering that many people have a lot more free time with shelter in place orders, what is likely happening here is that normal routines like listening to podcasts on the commute to work isn’t happening as day-to-day routines have been disrupted,” explained technology reporter Michael Motluck. Most people listen to podcasts while going to work, and, with most Americans now working from home, many people are no longer listening to them.

In addition, “I think folks also have less time in a day, trying to juggle working remotely, caring for kids, [and] trying to find alternate employment,” stated University of Wisconsin-Madison professor Jeremy Morris. Many parents are working around the clock to entertain their children and put food on the table, and it might not be possible for them to sit and listen to a podcast.

Yet, the programs featured on Broadway Podcast Network are performing well.

Over the past few weeks, the aggregator of audio content about the Great White Way watched the number of downloads for its shows soar 30 percent. “The jump is really across the board,” commented its founder, Dori Berinstein. “Every podcast is seeing greater traffic,” she said, adding that “one of our new podcasts, Ramin Karimloo’s The Hang, is so popular it crashed the site this week.”

During the pandemic, “I think, if people are listening to podcasts, they are turning to stories and fiction and plays as way to shut out the news, even if temporarily,” surmised professor Morris. “True crime and other popular genres may not be as comforting in times like these,” he said.

In fact, despite the popularity of the true-crime series Tiger King on Netflix, true-crime podcasts have witnessed the largest drop in downloads over the past few weeks, falling 30 percent since the start of March. People might not want to listen to murder mysteries while an invisible virus is decimating cities across the nation.

Mo Brady, the host of a popular program on the network named The Ensemblist, confirmed that, “in the last week, we’ve started to pivot to more ‘comfort food’ subjects for episodes.” “In such uncomfortable times, I think that listeners are looking for ways to connect to life ‘before’ COVID-19,” he said, highlighting that, “in the coming weeks, we will be producing more perennial content that celebrates musicals and how they can unite us.”

In addition, Rob Greenlee, the vice president of content and partnerships at the podcast hosting service Libsyn, thought that “the content on that network [could have] a renewed interest, given Broadway shows are shut down.”

“All of those folks who work on Broadway during the day and night are finding themselves with extra time and a hunger to stay connected which could mean they sought out podcasts,” explained podcast consultant Mathew Passey. “Similarly, people who had tickets for shows and some of the regulars who might go see a show weekly, are filling that void with content about and from Broadway.”

“With the absence of live theatre, at the moment, our audiences are craving that special connection,” confirmed Berinstein, who produced The Prom on Broadway last season. “BPN is also attracting huge audiences because theatre is all about connectivity,” she said, and, although there are frequent live streams and services showing recordings of musicals and plays, the shows on Broadway Podcast Network remains one of the few ways for both theatergoers and professionals in the Broadway community to stay connected.

Is The Roosevelt Captain A Martyred Hero Or A Disloyal Subordinate?

4 Ways To Balance Caregiving And Running A Business