Home Finance Coronavirus Is A Health Crisis, So Why Is The Stock Market Tanking?
Finance

Coronavirus Is A Health Crisis, So Why Is The Stock Market Tanking? 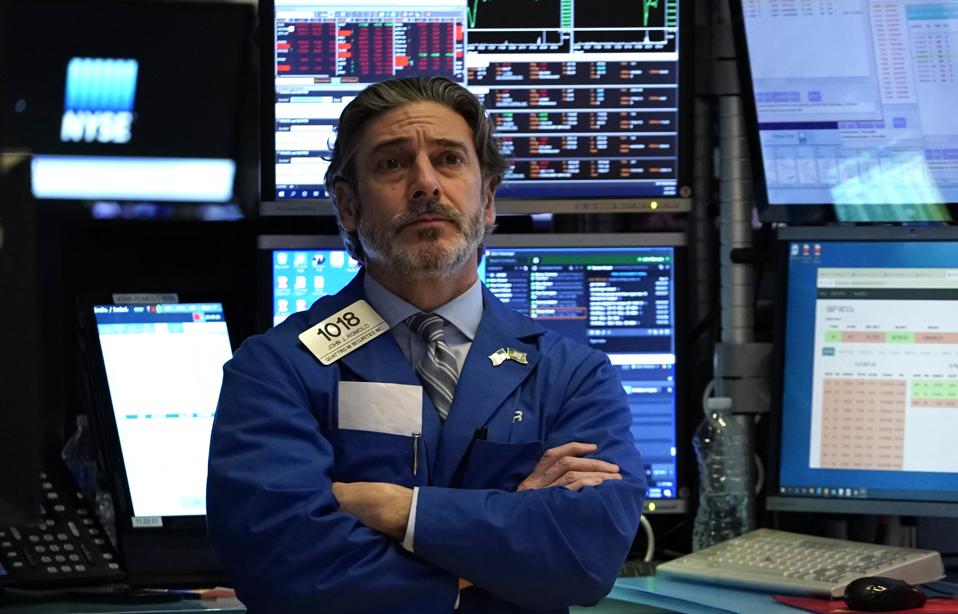 After weeks of wild stock market swings, trading was stopped within ten minutes of the open on Monday after the S&P dropped 7%, triggering a built-in “circuit breaker.”

The circuit breaker mechanism kicks in when stocks fall 7% (and 13%, and again at 20%) to keep them from free-falling, and to give traders a chance to re-assess. It’s a rare occurrence that brought to mind the depths of the 2008 financial crisis. Stocks resumed trading 15 minutes after the stall, but by the end of the trading day the Dow had lost 7.8% and the S&P 500 lost 7.6%. Both are down some 19% from their record highs in February.

The anxiety in the market has been growing since at least February when fears around the coronavirus began to peak. Just weeks ago, it seemed like the impact of the virus would be limited to companies with exposure to China where business activity in factories and retail shops had shut down. Starbucks, for instance, closed all its stores in the region for a period.

Now though, the virus has spread to 97 countries and the U.S is grappling with a health crisis that’s infected more than 109,000 people around the world and killed more than 3,800 so far. That public health crisis has now sickened the U.S. stock market and economy.

So what’s going on? How did a health issue become an economic threat?

United Airlines began offering flight waivers, and Delta, American, and JetBlue have waived fees. Airlines have reduced routes or cut flights entirely to cities affected by the outbreak, and all in, the spread of the virus could cost the airline industry $113 billion, according to the International Air Transport Association.

Hundreds of companies have also issued warnings that the virus’s spread may impact their financial results this year. Apple closed factories in China in February (they’ve since reopened), as did Honda. More than 51,000 companies around the world have at least one supplier in the region affected by the virus, according to Dun & Bradstreet. Last month, Wynn Resorts said the outbreak was costing the company $2.6 million per day.

When profits are in danger, investors get nervous. When investors are nervous, they sell. And when everybody sells into an overvalued market that’s in its 11th year of bull run performance, it creates a recipe for big losses in a short period of time.

“The returns that we saw from the fall, really from September through February, were just abnormally good,” says financial advisor Gregory Sarian, CEO of Sarian Strategic Partners, who notes that large cap tech stocks in particular were overpriced and overvalued. “Trees do not grow to the sky.” So in a lot of ways, the market was overdue for this kind of price correction.

And don’t forget the biggest economic news of 2019, even though it looks a lot less important next to this year’s market chaos. A global trade war, set off by escalating tensions and alternating tariff proposals and exemptions between the United States and China, put a major dent in the manufacturing sector last year.

During the second week of the selloff, the Federal Reserve made a rare emergency judgement call and cut interest rates by 50 basis points, or 0.5%, in an effort to slow the economic damage that was beginning to accumulate. “We do recognize that a rate cut will not reduce the rate of infection; it won’t fix a broken supply chain. We get that,” Fed Chairman Jerome Powell said at the time, stressing that his agency’s action should be just one part of a multifaceted response to the crisis that will involve health officials, fiscal authorities, and state and local governments.

Powell’s sudden rate cut didn’t work as planned. Markets tanked that day. Then, the results of Super Tuesday began to roll in that night, and markets rallied for a time on Wednesday after Joe Biden’s surprise success reassured investors that a pro-business moderate might end up in the White House in 2020. Health insurers fared particularly well as the likelihood that Medicare For All legislation (a key tenet of Senator Bernie Sanders’ platform) would become law seemed to diminish.

By the next day, however, stocks were back in the red. There was still lots of uncertainty around the spread of the virus and its impact. That day, the WHO announced nearly 2,000 new cases of the virus, 93% of which were outside China.

Over the weekend, Saudi Arabia—the world’s largest oil exporter—slashed its prices to levels not seen in 30 years after it could not convince Russia to agree to production cuts. The 13 members of OPEC (the Organization of the Petroleum Exporting Countries) along with some non-members, including Russia, had met to discuss how to respond to the lagging demand caused by the spreading coronavirus. When airlines don’t have passengers, for example, planes don’t need fuel and oil companies miss out on revenue from some of their biggest customers.

After negotiations fell apart, Saudi Aramco, the Saudi state-owned oil company, said it would offer major discounts in order win over buyers. It’s planning to boost its own production to more than 10 million barrels a day to undercut competitors. Oil prices lost more than 20% on Monday in response to the sudden supply shock. With too much oil in the market at a price that’s too low, other producers will not be able to compete with Aramco; smaller firms could even go under.

The coronavirus is spreading rapidly, and it seems both “uncontrollable and unpredictable,” wrote Lisa Shalett, Morgan Stanley’s Chief Investment Officer, in a note to clients on Monday. In the absence of a clear, coordinated response to the crisis from Washington, investors remain panicky. When uncertainty and fear prevail, traders flee risky assets like stocks and head for safer ones like gold and bonds, which pay a guaranteed return.

The best evidence of this? The yield on the 10-Year U.S. Treasury bond plummeted to less than 0.4% on Monday. Bond yields move inversely to price, so when more investors buy bonds, yields go down. Just one month ago, yields were hovering at about 1.5%.

Shalett also notes that the virus “feels increasingly linked to personal safety, which profoundly affects sentiment, psychology and consumer behavior.” On Monday, Italy extended its quarantine measures to encompass the entire country. Add all that fear to the very real financial threat behind Monday’s oil market crash and you have the “proverbial perfect storm,” says Sarian.

What’s an investor to do?

For individual investors, the best thing to do is to hang tight. Timing the market is a fool’s errand, and younger investors who have decades to accumulate wealth are best served by leaving their portfolios alone. Now is not the time to take risks with your money, especially not with money you may need in the short term.

There are a few prudent steps you can take, however. It might make sense to harvest your losses to offset any realized capital gains in your portfolio. Rebalancing your portfolio could also be a good idea: if you need to buy stocks in order to reallocate resources, now is a good time. It’s also a good time to make your 2019 retirement contributions, if you’re still eligible.

Government Action And Vested Interests Will Determine Where...