Breaking
Three Essential Components of a Successful Small Business
Pandemic Pet Adoptions Add To Chewy’s Tailwinds, But...
How to Use LinkedIn’s Social Selling Index Like...
Strong Revenue Trend Could Drive EXACT Sciences Corporation...
9 Things To Know Before Starting A Business
‘Game & Watch: The Legend Of Zelda’ Will...
The 9 Fundamental Components Of A Startup Pitch...
How to Get Results from Broken Link Building
Florida Supreme Court Tells The American Bar Association...
How to Write Perfect Paid Social Media Marketing...
How Restaurants Can Design a More Sustainable Food...
Expenses That Small Business Owners Need to Be...
How You Can Make Saying Goodbye To The...
Biden To Meet Royal Family At Cornwall’s Eden...
It’s Going To Be Emotional — Going International...
Peer Mentoring For Students: STEM & Buds
Home Finance “Coronavirus Stocks” Were Winners In H1 2020
Finance

Carrier Global is one of the largest HVAC manufacturers in the world. Last year it did some $18.6 billion in sales, close to half of it overseas. The Florida-based company employs approximately 53,000 people across six continents.

The reason I bring up Carrier now—besides the fact that, this being July, most of you reading this likely have your air conditioners running full blast—is because the company was the best performing S&P 500 stock for the first six months of 2020, up 67.9 percent.

Carrier’s stellar price action should come as no surprise. With millions of people around the globe following stay-at-home orders, HVAC services have become a top priority. There are few things worse than being cooped up in a building with a busted air conditioner.

In your head, list some other things you probably couldn’t have done without during lockdown.

Whatever product or service you name, there’s a fair chance that shares of the company or companies behind it also performed well in the first half of 2020. That includes disinfectant products (Clorox, up 45.3 percent in the six months ended June 30), home entertainment (Netflix and Activision Blizzard, up 42.1 percent and 29.7 percent), online retail (Amazon and eBay, up 49.4 percent and 47.7 percent) and—because restaurants were shut down—groceries (Kroger, up 17.7 percent).

These names are what some analysts have been referring to as “coronavirus stocks,” and they helped the market notch its best quarter in more than 20 years. The S&P 500 ended the June quarter up nearly 20 percent, the most since 1998. 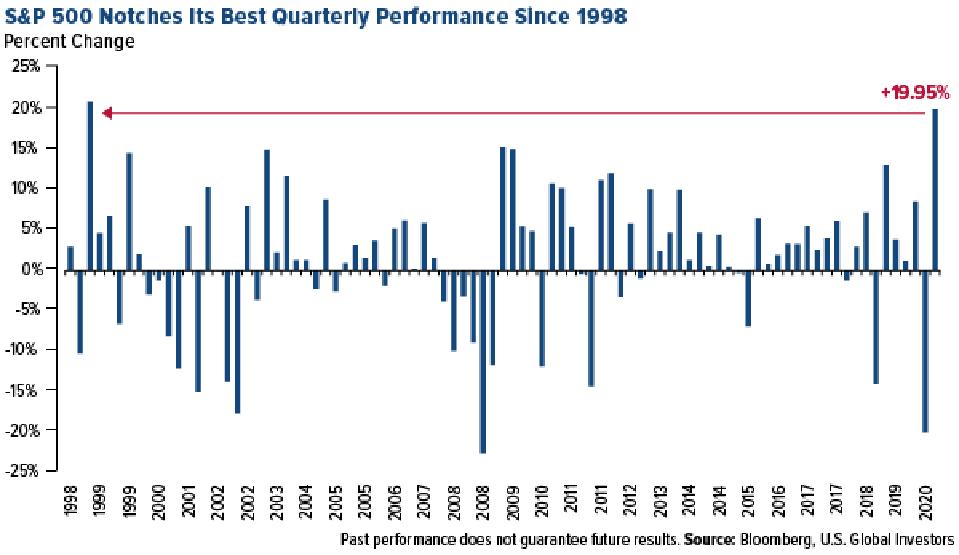 There’s another reason why I opened with Carrier. Like many other essentials and creature comforts people all over the world enjoy on a regular basis, the air conditioner—named the 10th greatest engineering achievement of the 20th century by the National Academy of Sciences (NAS)—is an American invention.

American ingenuity is something I hope you took pride in this past Fourth of July weekend.

Until recently, the U.S. held the largest number of international patents. China became the biggest source of applications in 2019 for the first time since the global system was set up more than 40 years ago. But as Bloomberg reported in 2018, most of the country’s patents are “worthless,” with many  Chinese patents being discarded by their fifth year.

The U.S. is also the world’s leading country by far for receiving Nobel Prizes. As of last year, the U.S. held an astonishing 385 Nobels, or close to three times as many as the second-place country, the U.K. Or as the American Enterprise Institute’s Mark Perry observes, “American laureates have received more Nobel awards (385) than the 372 prizes awarded to laureates in the next five countries combined (U.K., Germany, France, Sweden and Japan).” 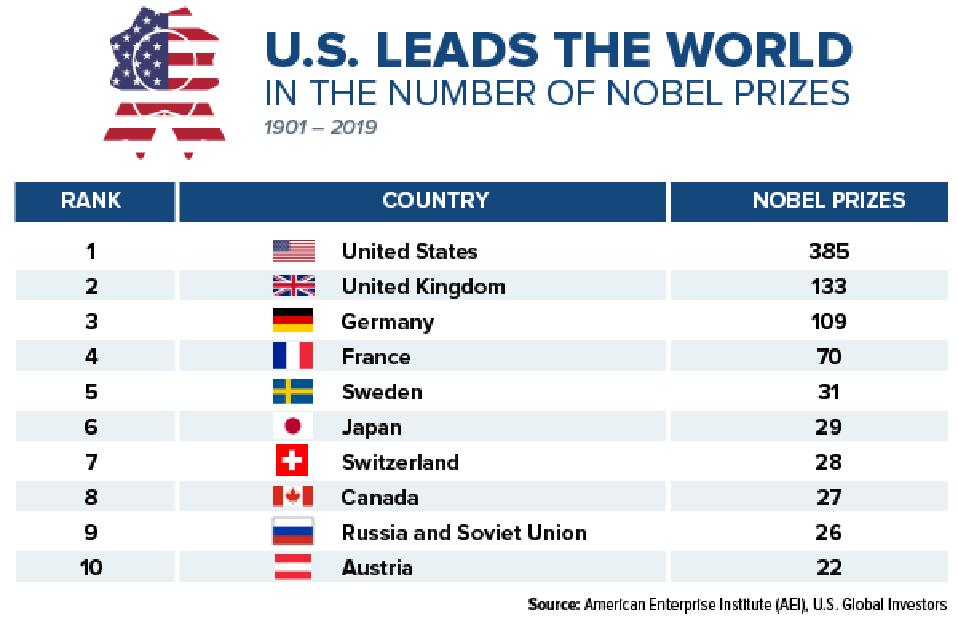 Among the biggest American innovation success stories of the past few years has been Tesla. Shares of the electric vehicle (EV) and battery manufacturer soared past $1,200 last week and are now up close to 190 percent so far this year, making CEO Elon Musk $25.8 billion richer.

Thanks to a much better-than-expected second quarter—Tesla reported more than 90,000 vehicles sold in the same three months that major Detroit auto manufacturers reported dramatic sales declines—the Palo Alto-based company is now the world’s most valuable carmaker. Tesla ended last Wednesday with a market cap of $207.2 billion, pushing it ahead of the now-former leader, Toyota.

The move was also enough to beat Exxon Mobil’s $185 billion market cap. Exxon is the world’s second largest energy company after Saudi Aramco, so the achievement should be seen as nothing less than wildly significant. I agree with others who call this a “symbolic energy shift,” but beyond that, Tesla’s success represents just the latest chapter in the ever-growing book of American ingenuity.

Changing subjects, gold futures rose above $1,800 an ounce last Tuesday for the first time since 2011. As impressively as the market performed in the first half of the year, gold performed better than 91 percent of stocks in the S&P 500.

The precious metal peaked at $1,807 on Wednesday before declining as U.S. payrolls in June beat expectations.

Gold is currently trading higher at this time of year than it ever has, and there’s still incredible potential for it to head higher on not just seasonality demand but also unprecedented monetary and fiscal policy.

To help businesses borrow in the time of COVID-19, the Federal Reserve has been buying corporate debt ETFs as well as individual corporate bonds. Through June 30, the Fed has spent an estimated $8.7 billion on such securities and, incredibly, is now one of the top holders of certain corporate debt ETFs.

For example, the Fed is the third-largest holder of the $55 billion iShares iBoxx $ Investment Grade Corporate Bond ETF (LQD). As of June 30, its position was valued at $1.8 billion. The ETF itself invests in debt issued by companies ranging from Anheuser-Busch to CVS Health to Microsoft.

This is a new level of money-printing we’ve never seen in the U.S. In Japan, yes, where the country’s central bank owns some 8 percent of Japan’s entire equity market, mostly through ETFs. But not in the U.S.

Could stocks and equity ETFs be next for Jerome Powell & Co.?