Breaking
Zynga Stock Looks Attractive At $9
How Russian Thieves Use Dark Web To Get...
France Off Travel Corridors And FCO Exempt List
Ask Ethan: Why Are The Moon And Sun...
When To See The Moon And The Planets...
IRS-CI Involved In Largest-Ever Seizure Of Terrorist Organizations’...
The Check Really Is In The Mail. After...
Epic Games Vs Apple: Why You Won’t Be...
Senator Kamala Harris Proposed A Bold Tax Credit...
Deal Terms To Reduce The Risk When Buying...
Multiple Sclerosis Drug Shows Promise For HIV Prevention...
The Neglected Piece Of Retirement Planning
It’s No Longer A Viable Option For Capitalism...
Virtual Credit Cards: An Extra Layer Of Protection...
Lessons From The Rainforest: Human Health Leads To...
Four Easy Ways To Bolster Your Company’s Reputation
Home Finance Coronavirus Update: China Gets Healthy, U.S. Gets Sicker And Europe ‘Wilts’
Finance 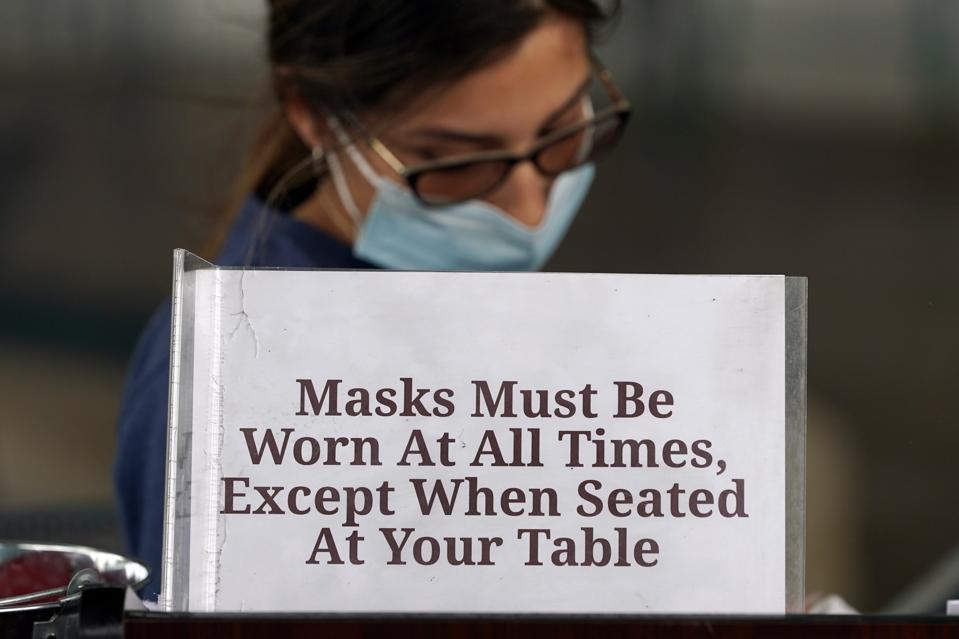 Hostess Carla Alexander waits behind a sign that ask customers to wear masks at the Saint Arnold … [+] Brewing Company, Friday, June 26, 2020, in Houston. Texas Gov. Greg Abbott announced Friday that he is shutting bars back down and scaling back restaurant capacity to 50%, in response to the increasing number of COVID-19 cases in Texas. (AP Photo/David J. Phillip)

The coronavirus started in Wuhan in December 2019, a city of 11 million in Hubei province. Over 4,000 people died. A month ago, city officials tested 11 million people from Wuhan. Only 300 people had the virus. Most of them were asymptomatic. China’s good. The virus has packed its bags and moved to the Americas.

The coronavirus might as well have started in New York City and Milano at this point in the pandemic. China has escaped relatively unscathed by comparison.

The Americas, from the U.S. down to southern Brazil, is 50 times worse anything that happened in China from the new SARS coronavirus. Of course, we don’t know precisely what things look like on the ground in China because, despite what Davos Man will tell you, China is a closed economy and a closed world. But it’s not as closed as it used to be, so judging by the people that go in and out of China and do business in China, the country is in much better shape than we are. Fact.

Unprecedented economic carnage has led to a first-ever Main Street bailout. No one can ever say that Wall Street and big corporations got all the dough. Not this time.

But stimulus checks to individuals and a one time payroll protection program might not be enough to maintain employment.

Moreover, unemployment insurance for those who were staff employees elsewhere will run out next month. Many of the jobs lost will not return. Case in point: Macy’s M is getting rid of 3,500 of those people who thought when things returned to some semblance of normalcy, they’d be back to working in the jewelry department. 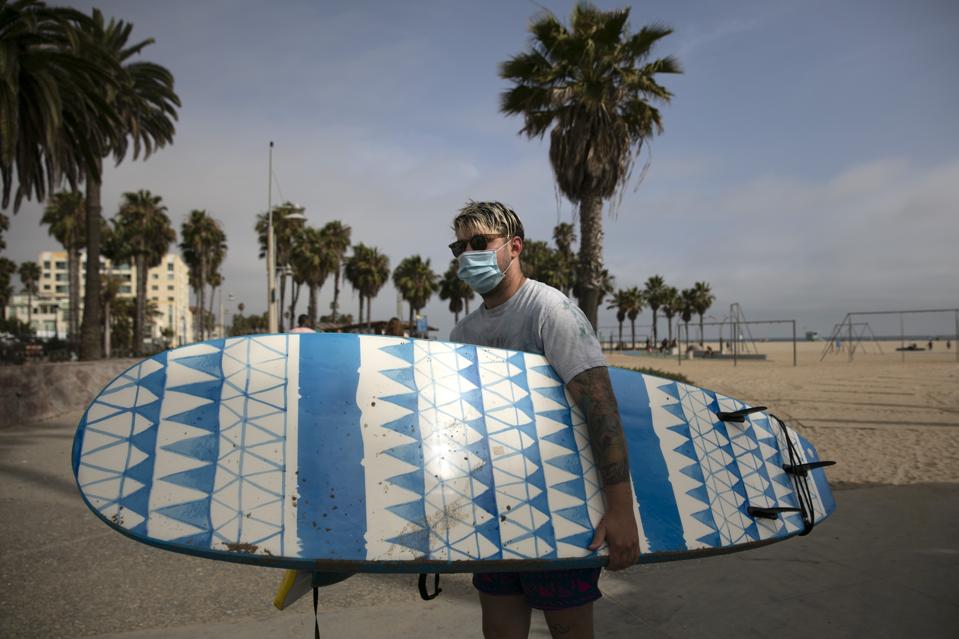 China is recovering. The infection curve has been flatlined. The U.S. can’t get out of its way.

The northeastern states are in recovery mode and sealed themselves off from the south. Texas, Florida and California are climbing up the infection curve. It matters that most of the people catching it are young and hospitalization rates are not staggering. This is not a “we need a bigger boat” moment, so that’s good news.

California, which locked down early and flattened the curve early, is now realizing that you can run from the coronavirus for as long as you want, but you can’t hide. Let that be a lesson.

Markets are selling. The rich are buying houses. If stocks fall 20%, buy it. The Fed’s got your back. The rest, keep in cash and say your prayers to Gaia or Jesus or Muhammed or let go of the stress of the world under a tree in your back yard. 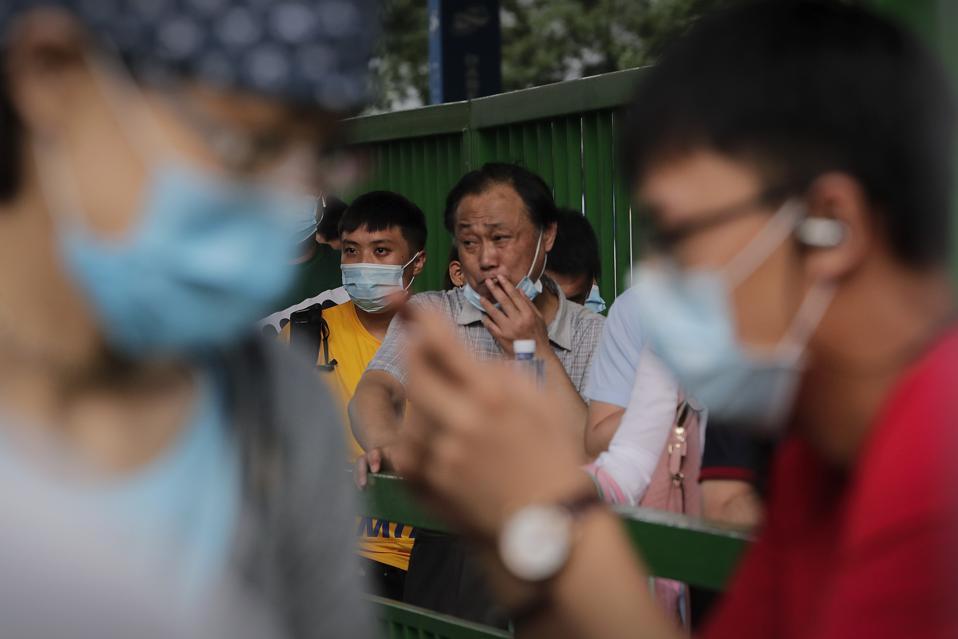 Beijing’s mini-outbreak has the city on high alert. It seems to be contained. At least that is what … [+] city officials are saying. (AP Photo/Andy Wong)

Remember the Beijing second wave? Right, no one does because it died about a week after Bloomberg and the FT ramped up on it as a sign of the second coming of SARS.

For what it’s worth, there was never a first wave in Beijing. The entire coronavirus epidemic was contained to Hubei province. Cities outside of the province that got it never even cracked a thousand, if we are to trust China’s numbers.

Even if we are not to trust China’s numbers by a factor of 100, if Shanghai had 10,000 cases, it never impacted its hospitals and its death toll was benign by comparison to any major city in Western Europe.

Since the reappearance of infections on June 11th in Beijing, a total of 307 new confirmed local cases had been reported as of June 25.

The number of daily new cases peaked at 39 on June 14 and have declined to around 10 per day since.

The spread of the outbreak outside Beijing is non-existent. All of the non-Beijing cases are in neighboring Hebei province (not Hubei).

On June 25, Zhang Boli, a top medical expert and member of the Chinese Academy of Engineering, said that he expects the number of Covid-19 cases in Beijing to decline to single digits by the end of June and to zero in mid- to late July. Let’s hope he is right.

Public health officials said the outbreak linked to the Xinfadi food market in Beijing is “under control” after the city imposed lockdowns on neighborhoods where infections had been detected. They then traced and quarantined people who had come in contact with infected persons.

China also sent medical teams from 12 provinces to help Beijing test people in the area of the outbreak. They supposedly have the capacity to test 400,000 people a day there. So far, around three million Beijing residents were tested as of mid-June.

But, until the new cases fall back to near zero, city officials and the public will remain cautious. Beijing is the seat of the Communist Party so this has to go swimmingly well all day long. They have warned that the situation in the capital is “serious and complicated.” They are taking no chances.

Meanwhile, Shanghai, Shenzhen and Guangzhou are firing on all six cylinders, not 8. Not yet. It’s going to take a while. But it’s better than Europe. Europe is a snoozer. What is going on there? 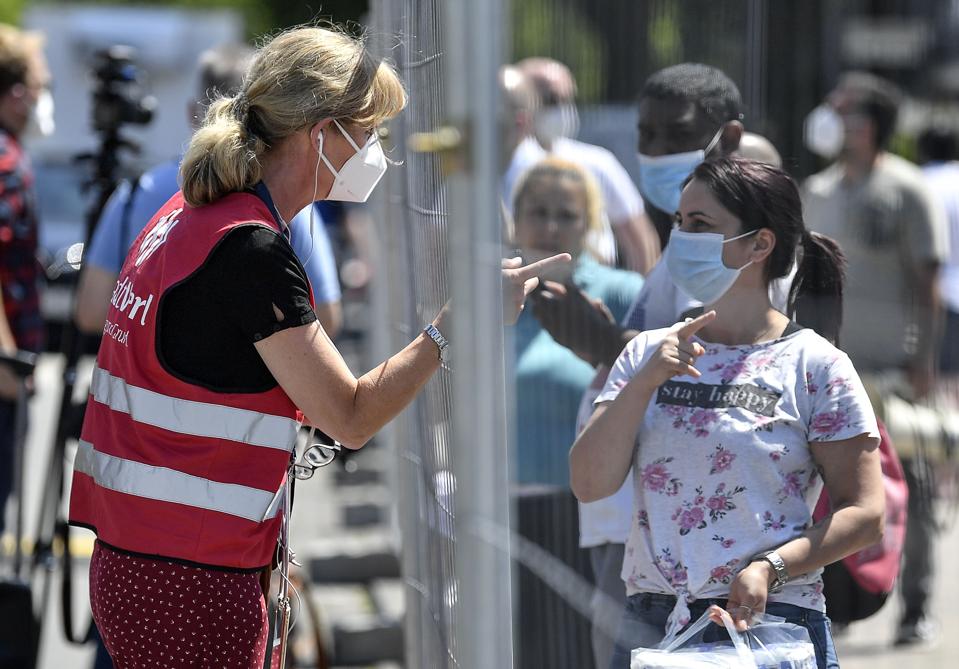 People quarantined in their apartments in Verl, Germany on Tuesday, June 23, 2020. Following an … [+] outbreak at a meat processor in Rheda-Wiedenbrueck, German authorities are restricting movement in the Guetersloh district. Another lockdown. (AP Photo/Martin Meissner)

Green shoots? Yes. But watch for signs of “wilting” say Barclays Capital economists led by Ludovico Sapio in London in a note to clients on Friday.

Last week’s PMIs indicate a de-coupling between Germany and France, with the latter perhaps enjoying a speedier recovery in June, thanks to favorable base effects from its more stringent lockdown.

Sapio from BarCap says Germany will outperform euro peers this year from an equity perspective. The latest high frequency data is showing Germany is further along the recovery curve. You can buy iShares MSCI Germany (EWG) if you dare. It is still trading above its 50 and 200-day moving average.

A resurgence of new cases in North Rhine-Westfalia and a re-introduction of containment measures there highlights the fact that Covid-19 is unstoppable. Either we stay home until there is a vaccine and cancel all taxes, mortgage, rent and lease payments, or we go for herd immunity at this point and protect hospitals from surges. What is the other option? 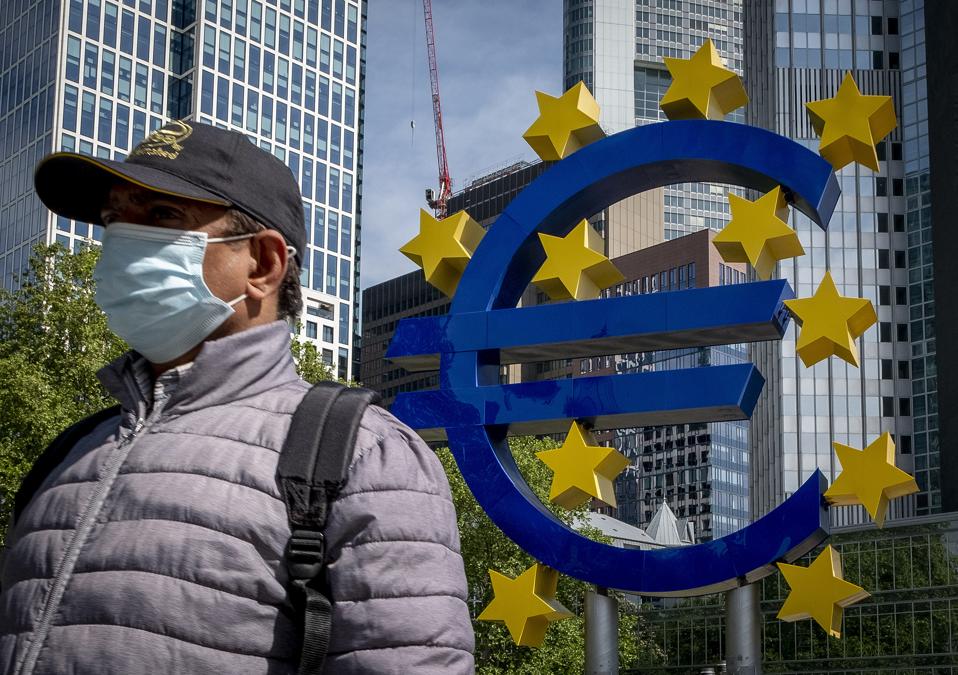 Euro zone economies to contract by more than 10% this year, according to the IMF. (AP Photo/Michael … [+] Probst)

Covid-19 “will remain the most significant risk to euro area growth,” says Sapio, who thinks it contracts 7.8% in 2020.

Sapio is bullish, though. The International Monetary Fund downgraded its outlook for euro area growth to -10.2% for 2020 and to 6% growth for 2021, meaning the euro zone will still be 3 percentage points in the hole even after 2021 is over.

There’s also been fresh cases of the coronavirus in Lisbon.

The coronavirus is alive and kicking and at this point looks to only be defeated by a vaccine, which may never come. There was no vaccine for the first SARS. That one died out in about 8 months. This version seems to have no end in sight.

What about the U.S.? Maybe Joe Biden will save us? Polls suggest the majority of Americans think he can. 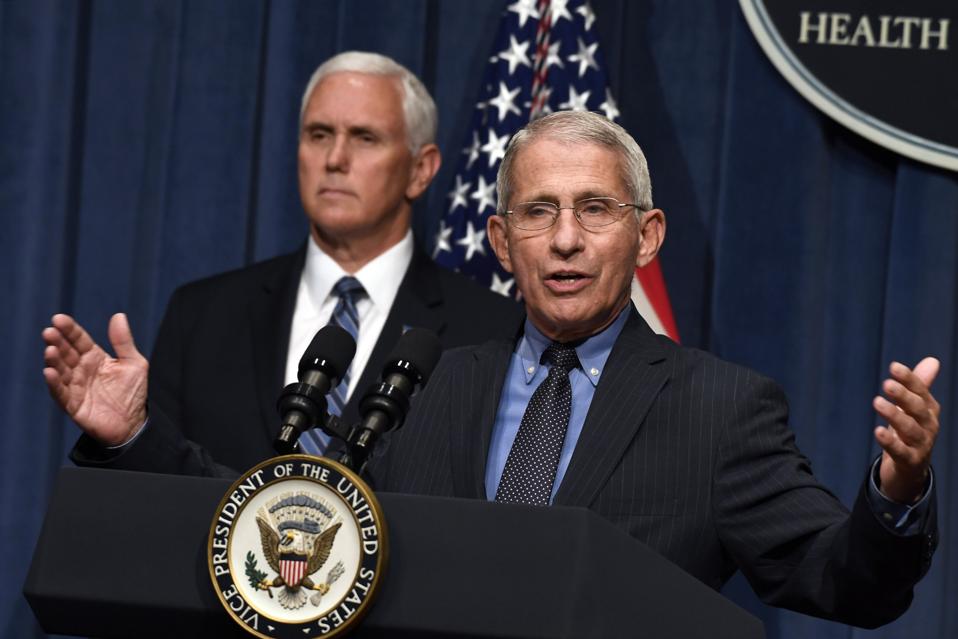 The Coronavirus Task Force is back in action. (AP Photo/Susan Walsh)

Another million plus jobs were lost last week. California and other states are climbing the infection curve again. Red state or blue state, the virus doesn’t care about your politics.

Markets will have to learn to avoid the panic attacks promoted by the “I told you so” types in the medical-media community, and see the forest for the trees on hospitalization and death rates. They seem to be okay, for the most part.

Meanwhile, the economy is in the gutter, no matter what Larry Kudlow says on a Friday before market close. The second quarter is looking like it contracted by at least 36%.

The corporate sector is becoming more cautious due to the accelerating growth rate of new Covid-19 cases and hospitalization rates across the South and West.

“To our eye, rising numbers of Covid-19 cases are a reminder that while states may have taken steps to remove stay-at-home orders, medium-term uncertainty about the economic outlook remains,” says Michael Gapen, U.S. economist for Barclays.

Big business may also have concerns about whether existing fiscal support from Congress is sufficient to keep the bridge in tact. That bridge was built to get people and businesses, especially small to mid-sized enterprises, from peak pandemic over to the other side of post-pandemic recovery.

We don’t need a bigger medical boat, but we do need a longer bridge.

At present, generous Federal support for unemployment insurance, an extra $600 per week on top of state insurance, is set to expire July 31.

Without an extension of the social safety net, and with current unemployment totals sitting at around 30 million, the U.S. needs an unprecedented burst of employment growth over the next several months if it is to avoid hitting the wall once all of this pent up demand fades, BarCap estimates.

“We are skeptical,” says Gapen.

Hiring in the services sector is unlikely to impress with companies like Macy’s getting rid of employees, and tourist spots closed.

Hospital surge or no hospital surge, the rise in coronavirus cases in states that were re-opening means there will be a pause, or a pull back, and that’s a market negative. Investors were buyers of the opening up theme.

For Barclays, they expect another $750 billion in fiscal stimulus by the end of July. It may be a required step to underpin households and business confidence into the fall, especially if the coronavirus has no plans of ending its tour of the Americas. By the looks of things, it does not.