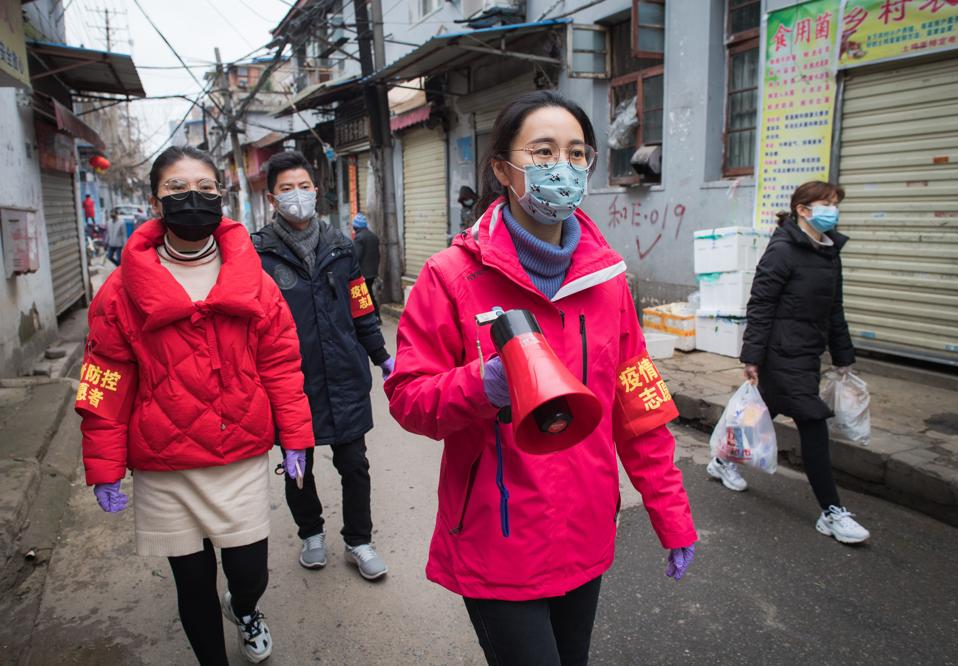 Community workers use a speaker to publicize the information about prevention and control of the … [+] novel coronavirus in Wuhan, Hubei Province, on February 7, 2020.

Many people in China are returning to work this week after visiting their families or taking vacations during the extended Lunar New Year holiday. For those of us who had resumed our duties earlier, the majority have been working remotely whenever possible to avoid the risk of contracting the coronavirus. Although the outbreak originated in Hubei, here in Shanghai, the streets, shops, and most public places are still practically devoid of traffic.

Nearly 45,200 cases have been confirmed globally and fatalities have reached 1,116, according to Johns Hopkins University CSSE. The implications of the outbreak are reaching far and wide. Some economists have slashed the forecast of China’s GDP growth to as low as 4.5%. This is in spite of the People’s Bank of China having initiated larger fiscal and monetary stimulus along with other government aid packages. Investors have been rattled the spread of the virus, as China’s main stock indexes plunged more than 8%, after reopening following the 10-day break.

Severe Acute Respiratory Syndrome (SARS), a coronavirus that originated in China and killed nearly 800 people in 2002 and 2003, is the most recent global outbreak to serve as a reference point to the economic and cross-border impacts. SARS contributed to an estimated 3 percentage point decrease to China’s real GDP growth of 5% in its worst-affected quarter. Historically, the Chinese economy was more driven by investment and trade, but has gradually rebalanced to a model led by domestic consumption and services. During the 15 years following SARS, the share of the service sector compared to China’s total output rose to 52% from 40%, according to the Asian Development Bank.

During the SARS outbreak in 2003, foreign direct investment (FDI) in China actually rose from March to June, but then dropped 57% to approximately $32 million in July, the lowest monthly tally for the year. The trend quickly reversed, however, once the outbreak was brought under control. FDI inflows to China gradually picked up from December 2003 and quickly exceeded the pre-outbreak monthly high of $55 million in the beginning of 2004, according to the Asian Development Bank.

In terms of connectivity during SARS, airlines worldwide saw a decline in traffic with those operating out of the Asia-Pacific region losing as much as 8% on an annual basis. SARS cost airlines more than $10 billion in revenue and caused a decrease of 39 billion revenue passenger kilometers (RPK). In North America, the loss to airlines was around $1 billion and RPK dropped 12.8 billion, or 3.7% of total international traffic, according to the International Air Transport Association.

What are the differences between this time and SARS? The current coronavirus outbreak has occurred in a different environment. China’s highly indebted economy had started to show signs of weakness in 2019, as it marked the slowest GDP expansion in nearly 30 years, standing at 6.1%. These global uncertainties have already dampened Chinese outbound investment by 9.8% to $118 billion in 2019.

Today, the Chinese economy accounts for 15% of global GDP in 2019, compared to 4% in 2003. As the world’s largest trading nation, China owns 11.4% of global goods trade. This economic slowdown creates more drag in the face of more uncertain global growth, while the domestic economy continues to be dampened by declining consumer consumption, now a much higher portion of GDP. China is now the source of 38% of global household consumption growth from 2010 to 2016, according to the World Bank. In certain sectors, like autos and mobile phones, China’s share of global consumption is even higher, at more than 30%.

The Chinese economy is more integrated into the global economy in 2019 than in 2003. Increased global connectivity has made the Chinese tourism industry the main engine of the global travel market in recent years. During SARS, China’s tourist volume was merely 7 million, less than 10% compared to 2019.

Meanwhile, the number of inbound visitors from the U.S. was around 160,000, compared to 3 million in 2018, according to Goldman Sachs. The UN World Tourism Organization estimated that Chinese tourists spent $277.3 billion overseas in 2018, up from around $10 billion in 2000 and are spending more on average than any other nationality on their trips, around $1,850 per person per year.

China accounts for 12% of total worldwide available seat kilometers versus only 5%, 15 years ago. International travel in and out of China is now more than 10 times what it was in 2003, with 150 million foreign trips in 2018.

Immigration curbs and flight cancellations from the coronavirus will have a significant impact on global growth. There have been over 15,000 domestic and 4,000 international flights canceled from China so far. More than 60 countries have some form of restrictions or quarantine protocols for Chinese nationals and foreign citizens who had recently visited China, particularly if they spent time in Wuhan or Hubei province. The most exposed regions to China airline traffic by available seat kilometers are Asia’s carriers with 30%, while North America is at 4%.

Much like SARS, the coronavirus will be a temporary exogenous shock on the economy and cross-border investments and may not have long-lasting impacts, but the recovery lag period might be longer. Of course, the quicker the virus is controlled and people can return to their normal routines, the faster the recovery will be. SARS lasted for about 4 to 6 months, and then the total outbound FDI recorded a meteoric rise from $3 billion to $118 billion between 2002 and last year.

With assistance by Mingxuan (Danny) Du.