Home Technology Could A New Mouse Be The Key To Boosting Your Productivity In 2020?
Technology 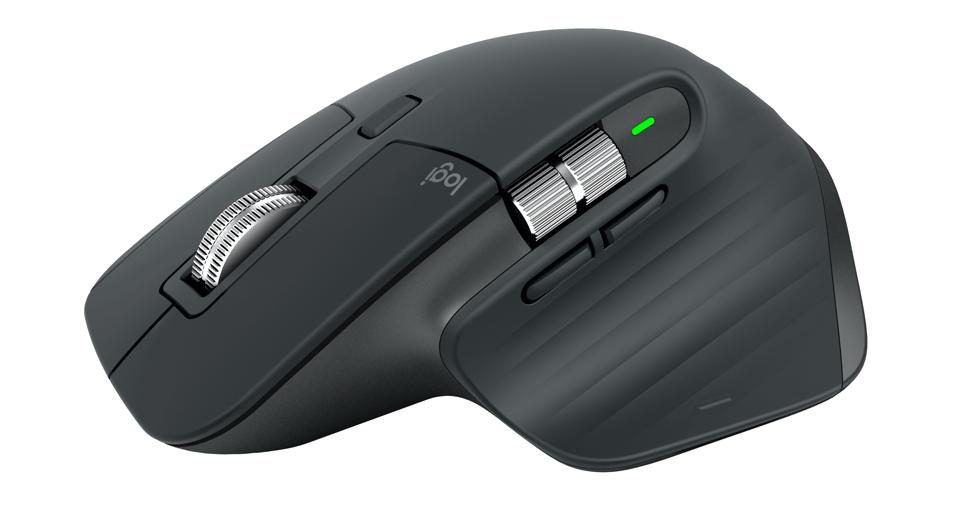 The Logitech Master MX3 mouse positively bristles with buttons and each can be programmed to work in … [+] a specific way with any application. With a little thought it can create a significant productivity boost.

At the top of my list of New Year’s resolutions is the one that says: “Be more productive in 2020”. Every year I say I’m going to work smarter and quicker but by the second week in January I’ve rarely done anything concrete about it. This year it’s different. This year I’m off to a flying start and already boosting my productivity… and it’s all down to a mouse.

A month or two back I reviewed the Logitech MX Keys, a deluxe extended keyboard that includes a backlight and the ability to use control three devices from the one keyboard. I was so impressed, I decided to look at Logitech’s MX Master 3, a highly evolved mouse that comes with some incredibly clever software that means its combination of eight buttons and scroll wheels can be customized to include shortcuts that can speed up work in a variety of software package that many of us use every day.

For the past 10 years I’ve been using the classic Apple Magic mouse with my iMac. It’s a fine mouse but it does tend to eat batteries and it can’t be customised that much. It’s true that there are a variety of gestures built into the Apple Mouse, but I’ve always found the switching between clicking and swiping slows me down. With a multiple-button mouse it’s possible to extend the efficacy of the mouse. Back in the dark days before the Apple Mouse, I used to use Microsoft mice with four buttons, and I found that the physical clicking and shortcuts speeded up my work considerably. Then I switched to the Apple mouse and forgot all about working smarter. 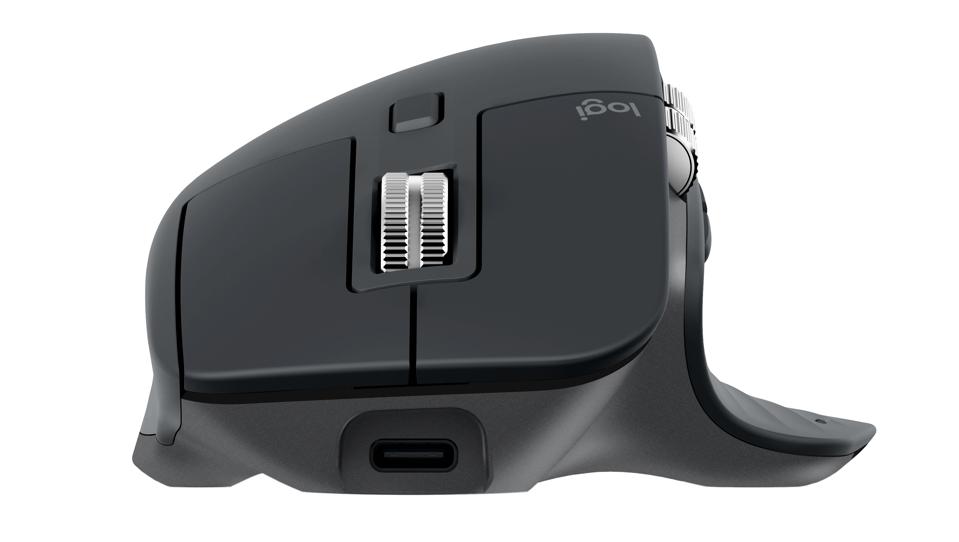 The low profile and almost aerodynamic design of the Logitech Master MX3 mouse gives some clue as to … [+] how much this little rodent can speed up the use fo almost any software package.

The Logitech MX Master 3 looks like a classic gaming mouse with it its tortoise-style humped back appearance, two main buttons and metal scroll wheel. There’s also a smaller horizontal scroll wheel on the side of the mouse, sitting above two smaller buttons that work nicely as forward and backward buttons when browsing the web. Finally, there’s a special programmable button that sits slightly out of the way on the side flange. I used this special button as a shortcut for launching the Logi Options app that is the secret to making the MX3 mouse my favourite productivity tool.

Inside the mouse there’s a sturdy lithium-polymer battery that is topped up using the supplied USB-C cable. One charge seems to go on for ever and the specifications quote up to 70 hours of usage between recharging. If you do find yourself out of juice, a quick one-minute boost will give three hours of usage time. That one feature alone is enough to boost my work rate because a minute is barely enough time to go off and make a cup of tea. This mouse could be the death of my awful habit of using displacement activities to procrastinate from getting on with work. 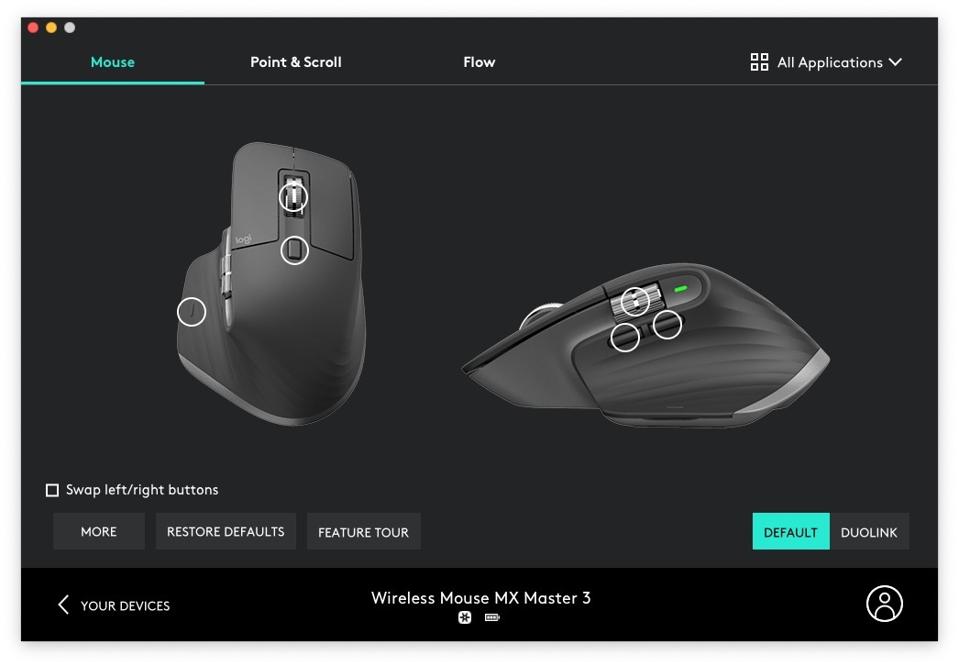 The Logi Options software makes it easy to assign behaviours to different buttons on the MX3.

With up to 4000 dpi tracking sensor, the Logitech MX Master 3 can even work on glass. It’s so precise it doesn’t mind what surface you use it on, and the resolution is high enough to make precision selections when doing fine work such as wielding the healing brush in Photoshop or drawing using a CAD package. The mouse can work with up to three different computers, including working between Mac and Windows devices. In fact, the mouse has a clever feature called “Flow” which is a cross-computer control that enables users to copy text or files from, say, a Mac and then paste the data into software running on a PC or other platform. This is super productive feature is a huge timesaver for anyone driving two computers at once and boosts productivity hugely.

The Logitech MX Master 3 is all about choice and that even extends to how the mouse is used to connect to up to three computers. As with all Logitech’s wireless input devices, the MX3 comes with a 2.4GHz wireless USB dongle that plugs into a Mac or PC for communicating between mouse and computer. It’s possible to use just one wireless dongle to receive signals from up to six different Logitech input devices, whether they be keyboards or mice etc. In addition, the MX Master 3 can also use Bluetooth to connect with up to three different devices at the same time, For example, you can install the wireless dongle on a Mac while switching over to Bluetooth when controlling a PC. It’s also possible to buy extra Unified dongles in order to use the mouse with multiple devices without the need for Bluetooth. 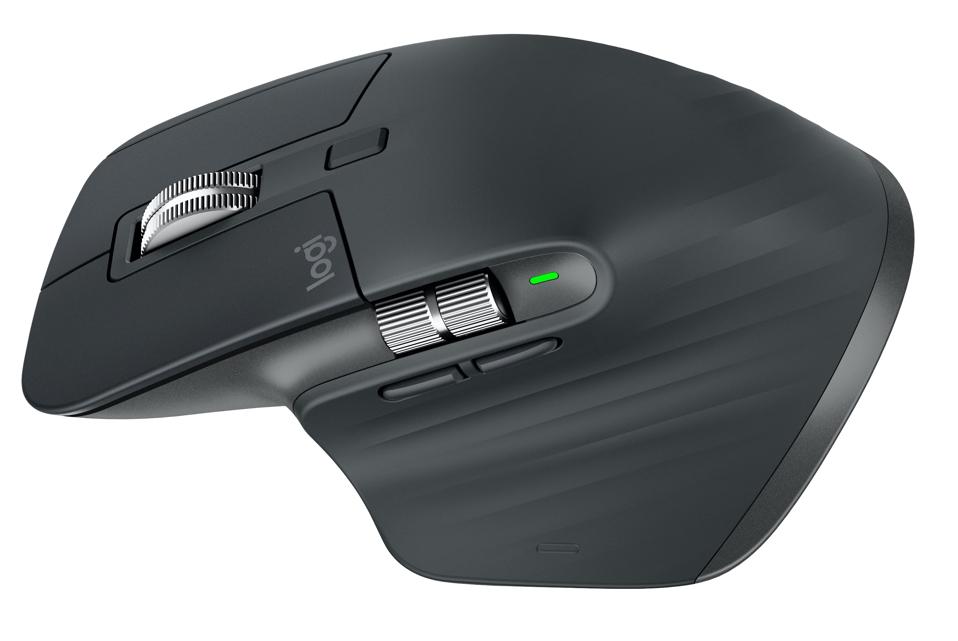 The scroll and thumb wheels on the Logitech Master MX3 are made from metal and feature knurling for … [+] a more precise action. The main scroll wheel can be used in ratchet or smooth mode.

In addition to the high-quality Left and Right buttons on the MX Master 3 mouse, there’s a metal scroll wheel that Logitech calls MagSpeed which can rip through up to 1000 lines per second. A small button above the scroll wheel switches between smooth scrolling and ratchet scrolling. The Logi Options can have a default setting for the mouse, or it can behaviour can be set differently for any individual software package. The wheel is also clickable and that provides yet another programmable button. It’s possible to change between smooth and ratchet scrolling on-the-fly just by clicking the little button. Many spreadsheet users like to use a ratchet effect but may prefer smooth scrolling for a browser or word processor. The Logi Options software even lets users set the speed and behaviour of the scroll wheel. In fact, the same goes for any button on the mouse. The function of the buttons are only limited by the user’s imagination.

On the side of the mouse there’s a second horizontal scroll wheel that can be programmed for almost any function. For example, I set the side wheel to work as a volume control on my iMac when I’m using music programmes like TIDAL or Qobuz, or any software that needs a handy volume control. With this custom set up I can pump up the volume in an instant with the tiniest movement of my thumb. However, for Photoshop and any other graphics packages that use brush tools, I’ve set the side wheel to change the brush size. In fact, the mouse can be configured with almost any combination of key presses. In Microsoft Word and when browsing the web, I reconfigured the side wheel to work as a quick zooming tool. I wouldn’t have believed how much my productivity could be boosted by being able to control so many functions without ever needing to take my hand off the mouse. 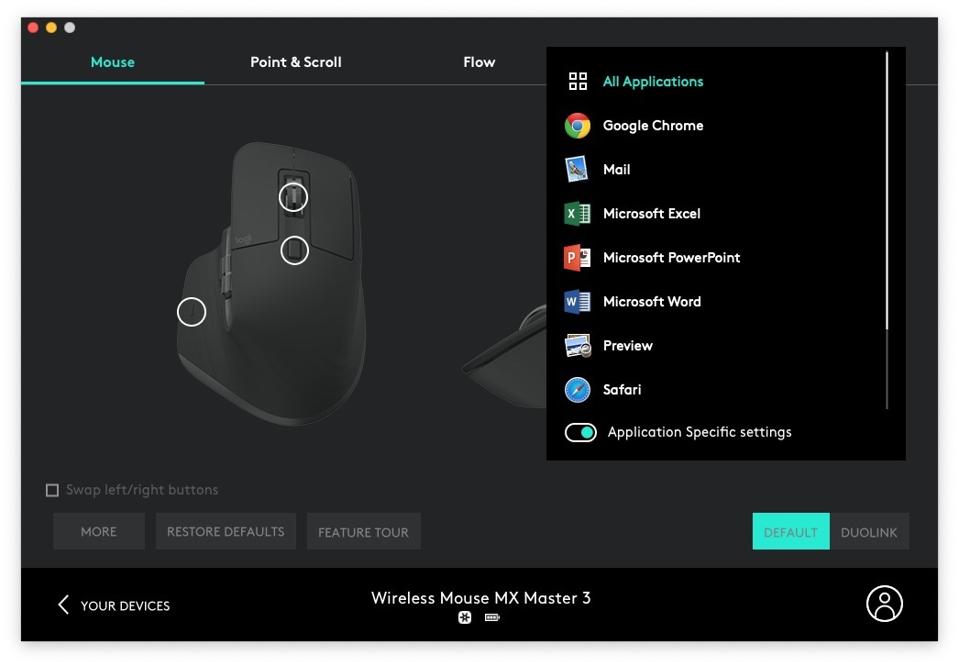 The Logi Options software enables every button on the MX3 to be programmed to work in a specific way … [+] with a package. Many popular pieces of software are preprogrammed but it’s possible to override them and add new ones.

To begin with, I assigned a few simple functions to the mouse’s buttons, but it was gratifying to see how many handy shortcuts were already programmed into the Logi Options software already. I configured the extra little button on the base of the mouse to launch the Logi Options software. I found I could fire up the customization software the moment I thought of a new shortcut that I wanted to program into the mouse.

Vedict: I’ve now spent a couple of weeks working full time with the Logitech MX Master 3 mouse and I don’t think there’s any way I could go back to a basic mouse. Each week the mouse boosts my productivity because I’m always adding new shortcuts using the Logi Options software. Over time, I’m hoping I’ll get even more productive. The software enables the user to back up all the custom settings into the cloud so it’s possible to protect all those valuable productivity hacks that have been set up over time. For anyone who uses a wide range of software on more than one computer platform, the Logitech MX Master 3 and MX Keys are invaluable. Here’s to a more productive 2020.

To Improve Team Performance, Know The Difference Between Broadcasting And Communicating

Where To Search Ammo Boxes At The Workshop,...

Why Microsoft Is Making Sure You Don’t Have...