Western retail is just beginning to feel the real effects of coronavirus. Initially, some categories of the industry actually received a bizarre boost – as panic-buying saw shoppers tussle over toilet paper at supermarkets and go crazy for cleaning products at Costco and canned goods at Trader Joe’s. 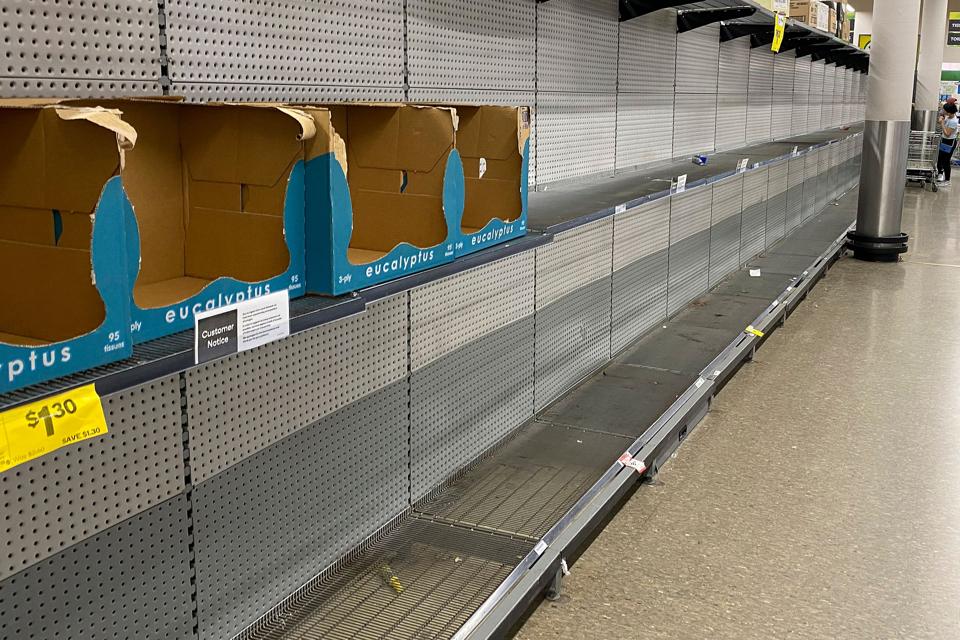 Shelves usually stocked with toilet rolls are seen empty in a supermarket following panic buying in … [+] Sydney on March 8, 2020. – A fight over toilet paper in an Australian supermarket on March 7 prompted police to call for calm after the latest violence sparked by coronavirus-induced panic buying in the country. (Photo by Saeed KHAN / AFP) (Photo by SAEED KHAN/AFP via Getty Images)

But now we are seeing the second wave hit, with malls emptying and stores closing. Apple is shuttering more than 450 stores across the world until March 27. Cosmetics company Glossier is temporarily pulling the shades down on its locations after founder Emily Weiss read an opinion piece in The Atlantic entitled “Cancel Everything”, which extolled the benefits of social distancing. New Jersey’s American Dream mall is closing before it really opened – shutting its recently launched theme park and ski slope, and delaying the ribbon-cutting on hundreds of stores in its second phase. Even Starbucks is considering making some stores drive-thru, or mobile-order only.

Whether retailers close their doors or not, customers are starting to avoid public places. Late last month (an aeon ago in coronavirus-time), a report by Coresight Research stated that 40% of U.S. respondents were already “avoiding or limiting visits to shopping centers/malls”, and if the situation worsened, that number would rise to 74.6%. (Spoiler alert: it worsened.)

It’s a strange twist of fate, as anthropologists will tell you that human beings evolved to become social animals, because there was safety in numbers. Right now, crowds spell danger.

The question is: where will it all end?

What’s happening now in China might provide an answer and could give us a glimmer of a light at the end of the tunnel. While COVID-19 cases surge in the West, there are signs that they are receding in the East – there are more people who have recovered from the illness in China than those that are sick.

As the population starts to bounce back, so too is retail. While Apple is sending its store associates and Geniuses home in 21 countries, it’s reopened its 42 locations in China. Apple CEO Tim Cook believes that things are getting under control.

Luxury malls in China are also beginning to see a mere trickle of traffic turn into a stream, as confidence gingerly returns. In a Fortune article, Amrita Banta, Managing Director of Agility Research cites the start of a “revenge spending” cycle, where recently isolated consumers starved of stores open up their wallets again.

We are a long way from “revenge spending”, with countries in the West beginning to “lock down” citizens and public spaces and a huge shift to remote working. Right now, those measures are critical to help curb the spread of the disease. When the tide begins to turn however, we will be keen to re-join the human race. And that includes spending time and money in physical retail on items beyond hand sanitizer and beans.

Coronavirus: Stuck At Home? Here’s The Tech To Get Through It

Traditional Grocery Retailers Are Winning Back Customers And...

How To Keep The Coronavirus From Killing Off...