Breaking
How To Get Your Startup Business Off The...
How To Create A COVID Safe Construction Site
How to Make a Good First Impression at...
Best Legal Practices For Reopening Sports Venues During...
Why Now Is A Good Time To Start...
Here’s Why Texas Instruments’ Stock Growing Almost 2x...
LinkedIn’s 50 Best Startups To Work For In...
3 Marketing Mistakes Holding You Back From Hitting...
Is The Matter In Our Universe Fundamentally Stable...
Majority Support Covid-19 Price Controls Says New Brookings...
Reimagined Pan-Mass Challenge Approaches $41M 2020 Fundraising Goal
Is Bitcoin Poised To Bounce Back After Its...
These ‘Temporary’ COVID-19 Changes Will Become Permanent
How Will Our Mental Health Be Affected By...
Selling A Business During A Pandemic: When Talented...
Top 10 Digital Transformation Trends For 2021
Two Veteran Entrepreneurs Aspire To Clean Up America’s...
PPP Forgiveness Applications Are Opening Up. Should You...
Best Domain Registrar
Home Finance Could Trump’s Student Loan Executive Order Open The Door To Loan Forgiveness?
Finance 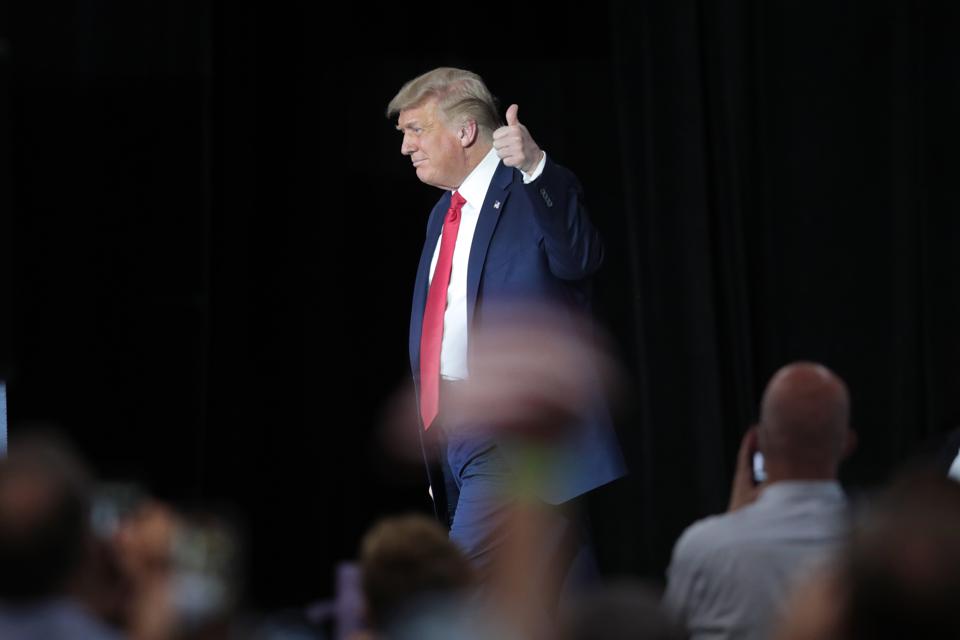 U.S. President Donald Trump arrives to deliver a speech to workers at a Whirlpool manufacturing … [+] facility on August 06, 2020 in Clyde, Ohio. (Photo by Scott Olson/Getty Images)

President Trump said at a news conference on Friday that he plans on issuing an executive order to address expiring student loan relief for millions of Americans under the CARES Act. He provided minimal details, but indicated that student loan payments and interest would continue to be deferred, possibly for an open-ended or indefinite period.

The Trump administration had previously exercised this executive authority in March to temporarily suspend student loan payments and interest at the beginning of the Coronavirus pandemic. Congress subsequently codified this in statute via the CARES Act in April.

A U.S. Department of Education spokesperson provided additional context for the legal basis of such an executive order. The spokesperson told Politico that when the President issued his first executive order on student loans in March, the basis for that order was legal authority granted by the Higher Education Act, which confers broad authority on the administration (via the Secretary of Education) to “enforce, pay, compromise, waive, or release” government-held federal student loans.

Consumer rights advocates and members of Congress have previously pointed to this broad authority as a sound legal basis for enacting broad student loan forgiveness, without the need for Congressional intervention. Senator Elizabeth Warren (D-Mass.) indicated during her presidential run that if elected, she would have used this authority to bypass Congress and enact widespread student debt cancellation.

“The Higher Education Act gives the Department of Education the ability to modify, compromise, waive, or release student loans,” Warren wrote. “This authority provides a safety valve for federal student loan programs, letting the Department of Education use its discretion to wipe away loans even when they do not meet the eligibility criteria for more specific cancellation programs like permanent disability discharge.”

Other consumer advocates and student loan experts have argued that using this executive authority to cancel student loan debt is perfectly legal. The Project on Predatory Student Lending noted, “We have consulted the statutory and regulatory framework governing federal student loan programs administered by the Department of Education, as well as the framework and controlling interpretations of the budgetary structure of these programs. We conclude that [Senator Warren’s] proposal calls for a lawful and permissible exercise of the Secretary’s authority under existing law.”

In addition, any executive order granting widespread student loan forgiveness could face legal challenges. Other stakeholders (such as student loan servicers and debt collectors) could potentially challenge such a sweeping reinterpretation of federal regulations in court, arguing that it goes beyond what Congress intended when it wrote the Higher Education Act. If there is a legal challenge, any student loan forgiveness could potentially be halted by injunction until there is a final decision by a federal court.

Nevertheless, President Trump’s reliance on the Higher Education Act’s authority to enact executive action providing broad student loan relief could be cited as precedent in the future — by this administration, or a future one — to enact more sweeping unilateral student loan relief.

Here’s what to do if Congress doesn’t extend student loan relief.

GOP To Include $1,200 Checks, But No New Student Loan Relief, In Stimulus Bill

This Unusual Move Gives You A Tax-Advantaged 8% Dividend

How Counterintuitive Thinking Can Save Your Business Right Now