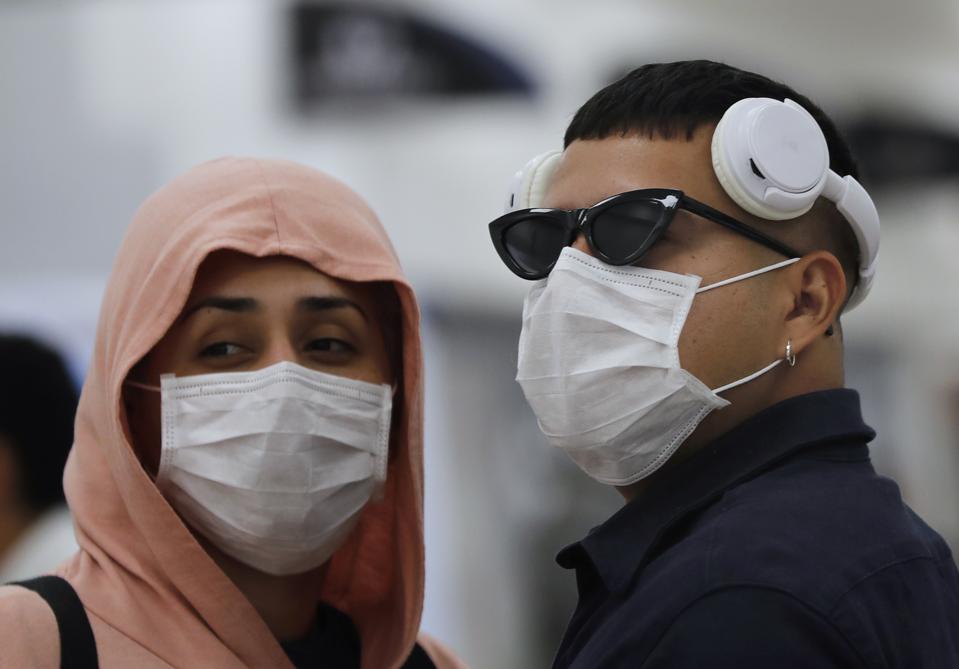 A couple wears protective masks as a precaution against the spread of the new coronavirus at the … [+] airport in Mexico City, Friday, Feb. 28, 2020. (AP Photo/Marco Ugarte)

The market response to Covid-19 has been swift and apocalyptic. All major indices have seen double digit falls in a matter of a few days. With over 3,000 deaths, the human cost of the virus is undoubtedly high, but are stock markets over-estimating the economic cost?

Markets have form in over-reacting to crises. The reaction to everything from SARS to tensions in the Gulf tends to be to sell-off first and ask questions later. There is no road-map for how the Covid-19 pandemic will develop, which gives rise to uncertainty. Markets aren’t keen on that.

But have they gone too far? Or could they still go lower? There is an argument that it is entirely rational for markets to sell off because the economic impact of efforts to curb the virus may be severe: people don’t want to travel, which hurts airlines and leisure industries; people may self-isolate which hurts productivity. In extremis, it may disrupt trading routes and supply chains.

T Rowe Price has made efforts to quantify this. It has looked at the effect of lost working days on overall production. It estimates that the current measures imposed by the Chinese government through early February have led to eight lost working days for the country as whole: “A reduction in one working day in Q1 leads to roughly a 0.4% loss in output, meaning the eight lost working days so far translate into a quarterly growth reduction of 3.2%. This number is 50% larger than the 2.1% growth impact measured during the SARS outbreak, and three times as large as the estimated 1% impact adjusted for external factors.” Extrapolate this to the rest of the world and it is plausible that the virus will tip the global economy into recession. The recovery was already fragile.

Jason Broomer, head of investment at Square Mile Investment Consulting and Research, says: “The economic implications of controlling the outbreak are severe. Supply chains will be disrupted as factories close, popular events are being cancelled and health services will come under increasing strain…The situation is very fluid and investors also need to be very alert to the possibility that markets will panic and overreact to the outbreak.”

However, he argues that markets have now fallen to a level that provides a “a reasonable reflection of the economic costs of the outbreak.” Some are arguing that the falls may already be overdone. Nigel Green, founder and CEO of deVere Group, says: “The worst global market sell-off since the 2008 crash will almost certainly become an important buying opportunity for many investors.

“With markets on the brink of correction territory, panic-selling, mis-pricing of high quality equities, and lower entry points, this could turn out to be one of the key buying opportunities in the last 10 years.”

Research by Schroders looks at the performance of stock markets at other times when the main gauge of volatility has hit high levels. it said: “The emotional response to such situations is to sell. Historically, however, this would have been the wrong thing to do.

“The current reading of over 40 puts the VIX in the top bracket of historical experience. However, rather than being an opportune time to sell, historically this has been when the best returns have been earned – for the brave hearted. On average, the S&P 500 has generated a return of over 25% in the 12 months after the VIX breached 32.9.”

If investors were to take advantage, where might the opportunities be? There are areas where the fall in the share price over-estimates the potential cost to the business. Daniel Morris, senior investment strategist at BNP Paribas, says he expects the transportation, tourism, leisure, and luxury good-related businesses to rebound most strongly. He points out that during the SARS outbreak many of these sectors saw earnings recovery within a few quarters.

Asia also looks to be a fruitful hunting ground, though this will depend on the reaction of governments to the crisis. They are likely to bring in easing measures, which will provide some support for companies and markets.

Investors need to ask themselves how they will feel when if all blows over? Will they look regretfully at having missed an opportunity to buy good companies at meaningful discounts? It may be time to start picking through the stock market rubble.