Breaking
ESBC Major Updates: Tons Of Heavyweight Greats Added...
How to Run Nonprofit Marketing Ads
Entrepreneurs Are Bringing Transparency To Home Buying And...
Best Incentive To Get Vaccinated: Money, Messaging, Or...
Page Level Query Analysis at Scale with Google...
How A CIO Can Align IT With Business...
Blogger of the Month: Jo, Girl Eats World
6 Things Women In Business Know That Men...
How to Use First-Party Data for Ad Personalization
Pressing Reset—Putting A Fallen Unicorn Back On Its...
How We Went Viral: Promoting Content with Influencers,...
Blame Olympic Record Price Tag For Return To...
Apple iOS 14.5 Release: Should You Upgrade?
How to Come up with Podcast Topics and...
Why Gaming Gear Company Razer Launched A $50...
Technical SEO Implementations to Increase the Impact of...
Home Technology COVID Killer Cleanbox In The Right Spot At The Right Time
Technology

COVID Killer Cleanbox In The Right Spot At The Right Time

Cleanbox Technology, an ultra-violet C (UVC) decontamination technology company, was building momentum in location-based entertainment as the go-to method for public headset sterilization when COVID-19 dealt the industry a crippling blow. Founded in 2016 by Amy Hedrick and David Georgeson as a hygienic and eco-friendly solution for the decontamination and drying of VR and AR headsets in commercial venues, the company was seemingly vulnerable to a black swan event like the total shutdown of the public VR industry during a pandemic. Yet when Hedrick first heard of Coronavirus in December, she increased the pace of production. 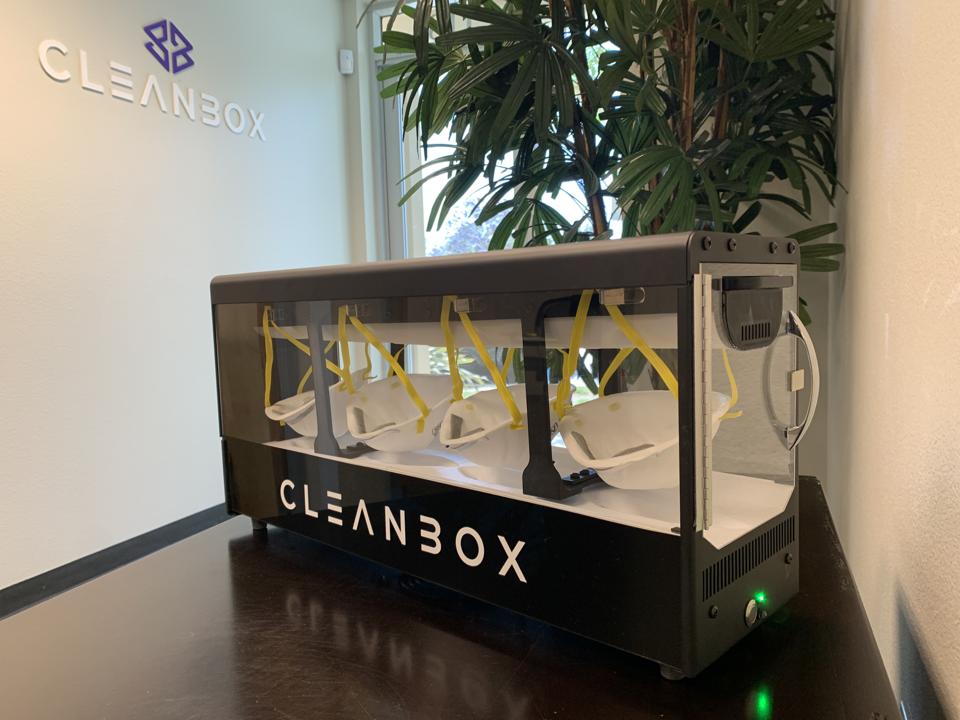 Four N95 masks can be cleaned and dried in less than two minutes.

Location-based VR (LBVR) has been growing rapidly in the past five years into one of the industry’s strongest segments, but it is tied to the whole public space entertainment ecosystem represented by Las Vegas writ large. LBVR is in this case the proverbial tail, not the dog. How will bars, restaurants, or movie theaters survive? Will the local mall even be open next year?

Hedrick told us “while LBVR may or may not be coming back soon, a lot of shared, wearable equipment in training centers, hospitals, schools, and factories will need effective and validated cleaning.” Because Cleanbox Technology’s UVC boxes kill COVID-19, the world, as Emerson famously said, is beating a path to their door. The company has added eight new sales representatives to handle the incoming demand. 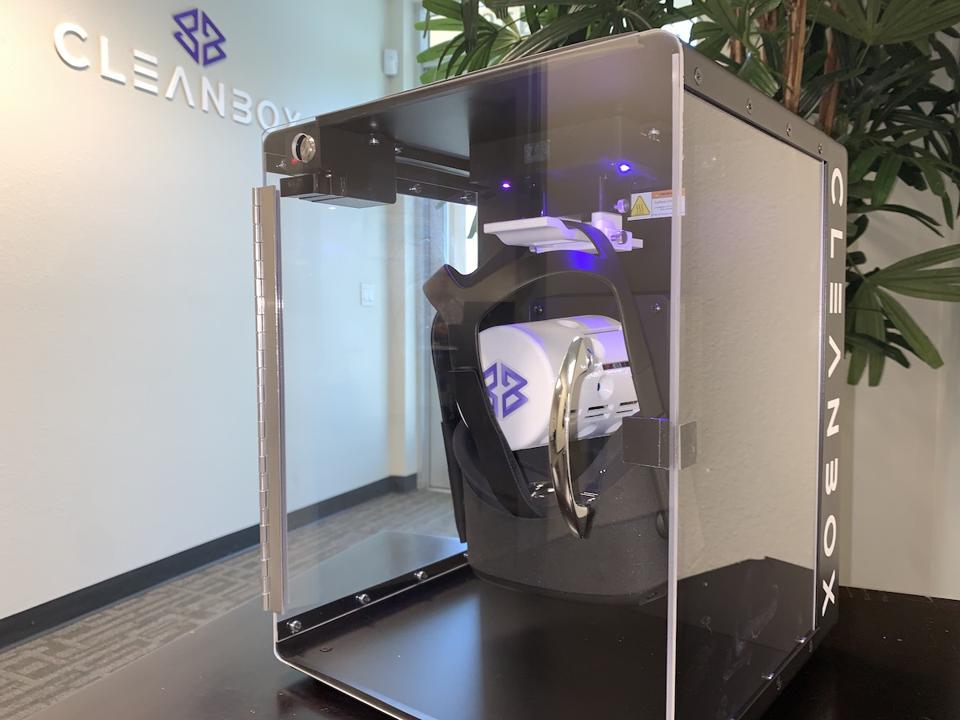 Invented for Location-based VR, Cleanbox can sanitize any shared instruments or wearables in less … [+] than two minutes.

Cleanbox currently offers four products—-the CX series [CX1, CX2, CX4] which serves as a decontamination device for XR HMDs as well as earphones and broadcasting headphones, and their newest product, CleanDefense which sanitizes masks. Cleanbox’s CX series was being rapidly adopted by VR venues before the pandemic began. The CX series boxes will further be used as decontamination solutions in the entertainment industry for communication devices which will slowly allow people at broadcast networks to return to a new normal with enhanced safety. A cleaning cycle takes sixty seconds.

CleanDefense, which begins shipping next month, cleans four masks at once—100 or more per hour—and is portable, designed to be used at multiple different stations, and is now proven to decontaminate hard-to-clean masks such as N95s.

A new Cleanbox product coming this summer is the AdHoc box. Furthermore, these AdHoc Cleanboxes can fit cell phones, computers, stethoscopes, earbuds, walkie talkies, and other mass-use hardware for sanitation. 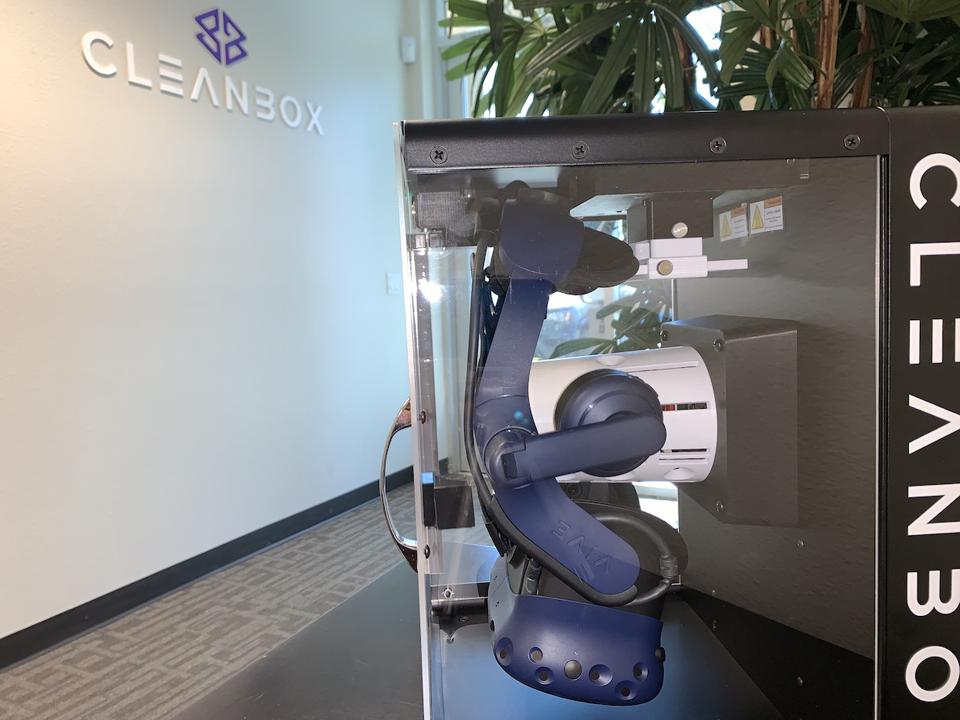 A VR headert gets the Cleanbox treatment.

In twenty-four months, the company believes the largest growth industry will be healthcare as telehealth is expanding due to the current global crisis. Some clients of Cleanbox are Hoag Hospital, Newport Beach, Harvard, Ford, FedEx, HP, Cedars Sinai, Los Angeles, Applied VR, and The Switch.

Cleanbox isn’t the only LBVR company shifting to new markets. Spaces, the location-based VR spin-off of DreamWorks Animation, which has successful Terminator VR locations in the US and Asia, has been developing a remote collaboration platform, also called Spaces. Other LBVR companies are taking their own approaches to reinvent themselves. Park Playland in Belgium is beta testing VR arcade rentals from home, via an online portal, and Adventure Lab, located in San Francisco, is offering online escape rooms from home with a live game master. As Europe and Asia are reopening to the new normal, VR arcades such as HTC VIVEPORT in Asia are seeing players return. In Europe and Asia, next week will serve as a pivotal point as theme parks with VR elements are reopening, including Europa Park in Germany.

Meanwhile, in the US, Virtuix, creator of the “Omni Arena” virtual reality esports attraction, has shared encouraging usage data from entertainment venues that have recently reopened. 12 of 26 Omni Arena locations have reopened the attraction to the public. At venues that have reopened for three or more weeks, gameplay sessions on Omni Arena have recovered to 95% of pre-lockdown levels. “We have not seen hesitation by guests to play virtual reality again as long as you keep everything clean,” said Kai Evans, owner of Adventure Park in Lubbock, Texas. “We’re all climbing out of a dark hole,” said Jan Goetgeluk, founder and CEO of Virtuix. “The data is encouraging and shows that all is not lost. Together as an industry, we can get past this setback.” 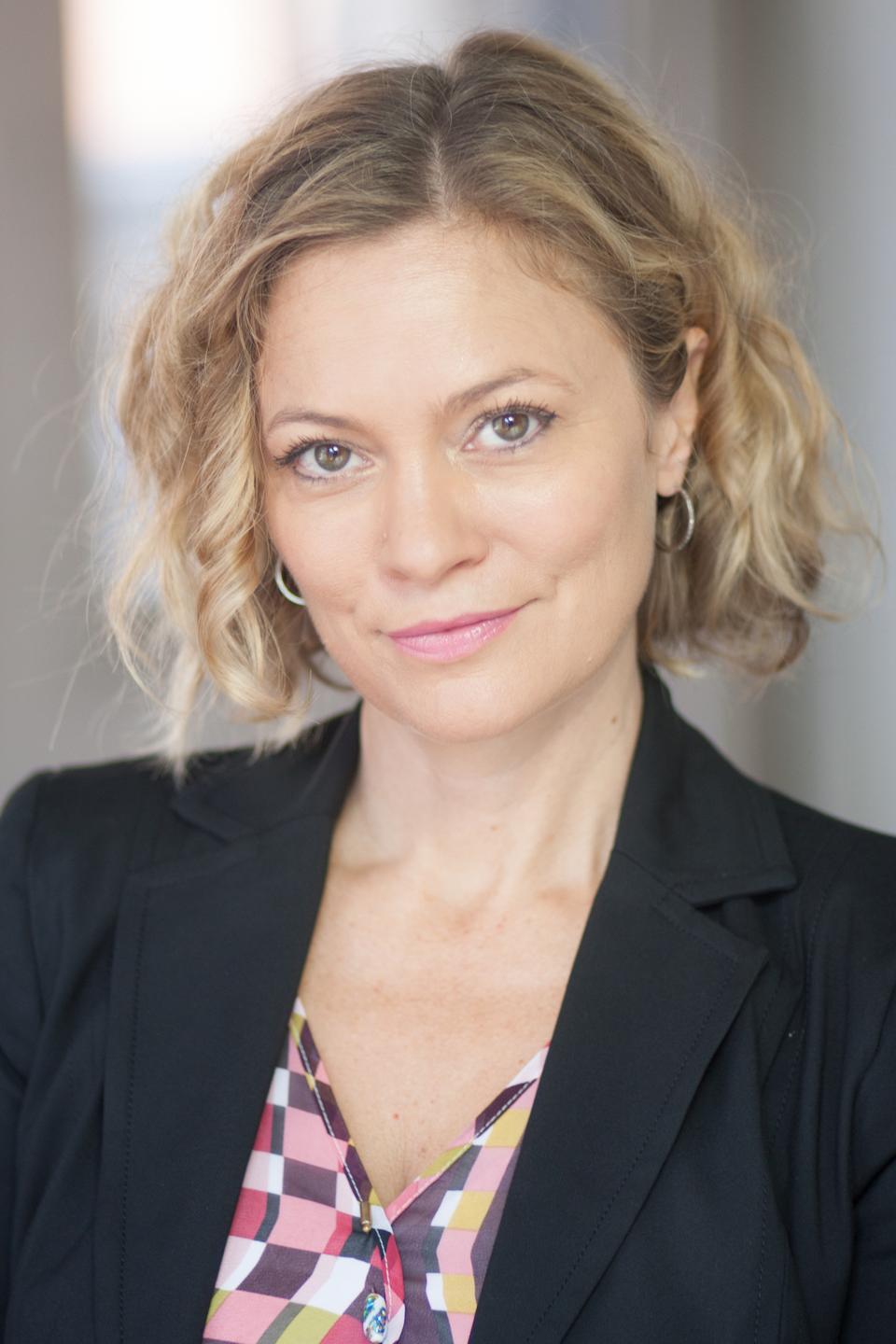 Cleanbox is in an enviable position. If LBVR comes back, they’ll be more needed than ever, and if it doesn’t, they’ll be fine. The pandemic has exposed private and public enterprises using VR to a need they didn’t know they had six months ago, making Cleanbox a startup with Zoom-like timing. Hedrick says the company will soon begin raising a round of funding to fuel its growth. “Hygiene protocol that is visible and effective is necessary for every business with shared personal equipment,” she concluded.

This story was written with Brandon Cloobeck.

Why It Matters That IBM Has Abandoned Its Facial Recognition Technology

Goldman Sees ‘Clear Signs Of Recovery’ In 2020, But Says These Risks Remain