Cubs Hoping Off The Field Moves Cover For Quiet Winter 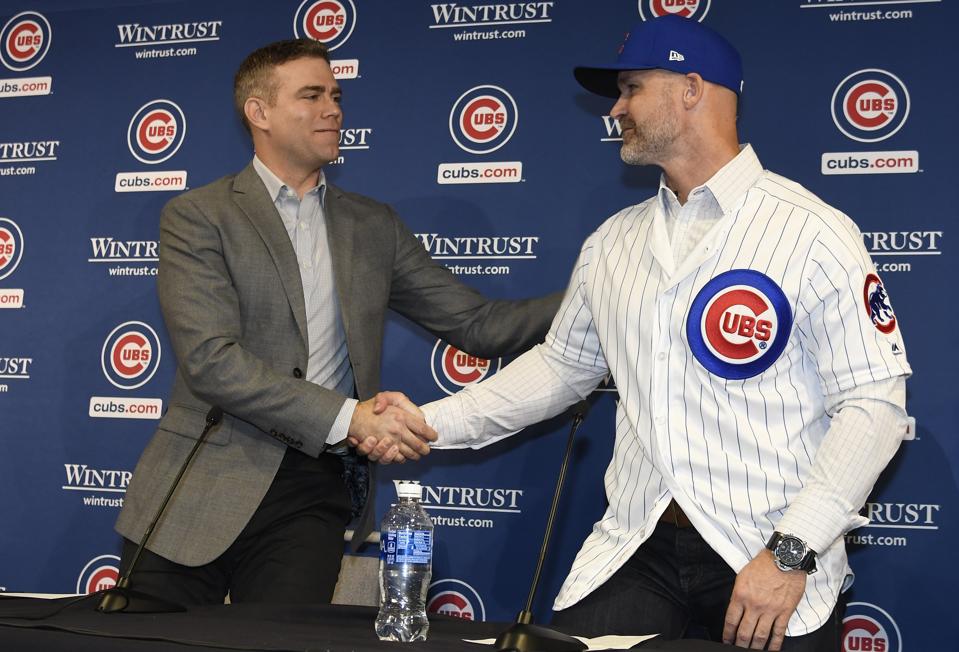 CHICAGO, ILLINOIS – OCTOBER 28: Theo Epstein, president of baseball operations of the Chicago Cubs … [+] (L) shakes hands with David Ross, new manager of the Chicago Cubs (R) talks to the to the media during a press conference at Wrigley Field on October 28, 2019 in Chicago, Illinois. (Photo by David Banks/Getty Images)

In an MLB offseason where almost $2 billion has been spent in free agency, the Chicago Cubs are one of just two teams who have not yet handed out a major league contract. Whether by choice or by necessity, the Cubs front office is staying relatively quiet this winter, at least as it affects their major league roster.

This weekend, the team held its annual fan convention in downtown Chicago, and the biggest visible change to the team is new manager David Ross. Otherwise, the Cubs are hoping a significant restructuring of their player development infrastructure will make the difference in 2020 and beyond. Notable moves have included moving Jason McLeod away from supervising the draft and farm system, hiring Dan Kantrovitz to take that role, hiring Justin Stone to be their director of hitting, and hiring Driveline’s Casey Jacobson to be the director of pitching development.

As for the front-facing members of the organization, the players gathered at the Sheraton Grand Hotel in Chicago for the fan convention didn’t express much public concern over the fact that the roster that finished in third place in the NL Central in 2019 was thus far largely the same.

“I leave that to the front office,” shortstop Javy Baez said of his team’s lack of activity. “I think they’re doing a great job, and they know what they’re doing.”

To some degree, there’s merit in the faith Baez has in the people running the Cubs. They did assemble a team that won a World Series just a few years ago and had strung together four straight seasons with a playoff appearance, and the core of that roster is still mostly intact. But recent history suggests that the Cubs are in need for change besides behind the scenes.

In 2018, they lost the division to Milwaukee in game 163 and then lost the NL wild-card to the Rockies the next night. Last year, the team went 84-78, seven games out of first place in their division for a third place finish and the first time since 2014 that the Cubs failed to reach the postseason.

So unless this group finds a way to muster better play and production from a roster that is mostly unchanged from the teams that faltered for the past two years, the outlook for 2020 isn’t much better. If the front office stays quiet, a lot will ride on whether their new manager can create a winning culture despite no major changes to his roster.

“I think that’s great,” outfielder Albert Almora said of the Ross hire. “They do everything for a reason, they do everything with a purpose, and you can’t question what they do. You just gotta go out, whatever team we have assembled, and go out there and win ballgames.”

The Cubs still have one of the highest payrolls in baseball, with a projected total of over $213 million for 2020, according to Roster Resource. Much of that is the product of a team that, despite essentially taking the past two winters off in free agency, was one of the most active in the years prior.

“If you don’t remember too long ago, we were the team that was making all the moves and doing this and doing that,” outfielder Kyle Schwarber said. “You’ve got to keep that in perspective and keep it in perspective of what we have here is still top tier of a lot of baseball teams.”

The problem Cubs ownership has expressed that is created by carrying a payroll over the luxury tax threshold is that the penalty grows year by year. As Chairman Tom Ricketts told The Athletic’s Patrick Mooney, the luxury tax has been a factor in the team’s activity.

“It’s not the defining factor of this offseason. What we’re going to do with CBT is not something we discuss publicly. But fans should know there is a cost if you keep your payroll high enough long enough,” Ricketts said. “You’re paying money into the league, which ultimately goes to other teams, and you can lose draft position. It’s a factor. It’s not the defining factor of the offseason.”

It should be noted that the luxury tax penalty is not very large in the scheme of a professional baseball team’s budget — estimates have the Cubs paying about $8.5 million in 2019 and in line for just under $2 million this year — so the concerns expressed by the Ricketts family might be somewhat overblown.

Regardless, the Cubs are operating the way that they are because of the luxury tax threshold, and that has contributed to thus far keeping them from signing any players to a major league contract this winter.

“In our case, it’s a little extreme where we haven’t signed a guaranteed free-agent contract this winter, but it’s not outside the norm or the general trend that’s going on in the game,” team president Theo Epstein said. “That doesn’t mean we can’t be successful or those teams that aren’t as active can’t be successful.”

When asked by a fan about the team’s lack of activity in free agency, Epstein said, “It’s not opening day yet. There’s still a chance for changes.”

But unless the Ricketts family changes its attitude toward paying the luxury tax penalty, the Cubs will have to hope that the changes they’ve made to the off the field aspects of the organization will be enough to get them back in contention.

Apple’s Latest AI Acquisition Is A Glimpse Into Future Devices

Lander Moab Case: Protects Your Smartphone, Even From Extreme Cold