Breaking
Everything You Need To Know About EMI Option...
Social Security’s Government Pension Offset (GPO)-A Common Sense...
5 Practical Tips for Small Businesses Going Through...
Part II: How To Optimize Product Ownership In...
How Zoom Conquered Video Conferencing
How To Meet Customer Expectations This Holiday Shopping...
How To Maintain A Healthy Co-Founder Relationship: Nine...
A Technology Solution For Muni Bond Disclosure
Five Common Ways To Fund A Small Business...
Your Floss Pick Habit Is Killing The Planet,...
Customer Service Recovery: Six Keys To Turn Complaints...
10 Unique Habits To Positively Impact Your Productivity
How Becoming A Learning Organization Is Key To...
IRS Increases Enforcement On Cryptocurrency: What This Means...
Optimus Prime Finally Gets The Diaclone Update He...
No, There Isn’t A Black Hole At The...
Home Business Cuomo: New York Down To 400 Coronavirus Hospitalizations Per Day
BusinessFinance

Cuomo: New York Down To 400 Coronavirus Hospitalizations Per Day

New York Governor Andrew Cuomo said in a press conference on Saturday that the number of new coronavirus cases in his state continues to decline, as several regions begin a phased reopening of businesses. 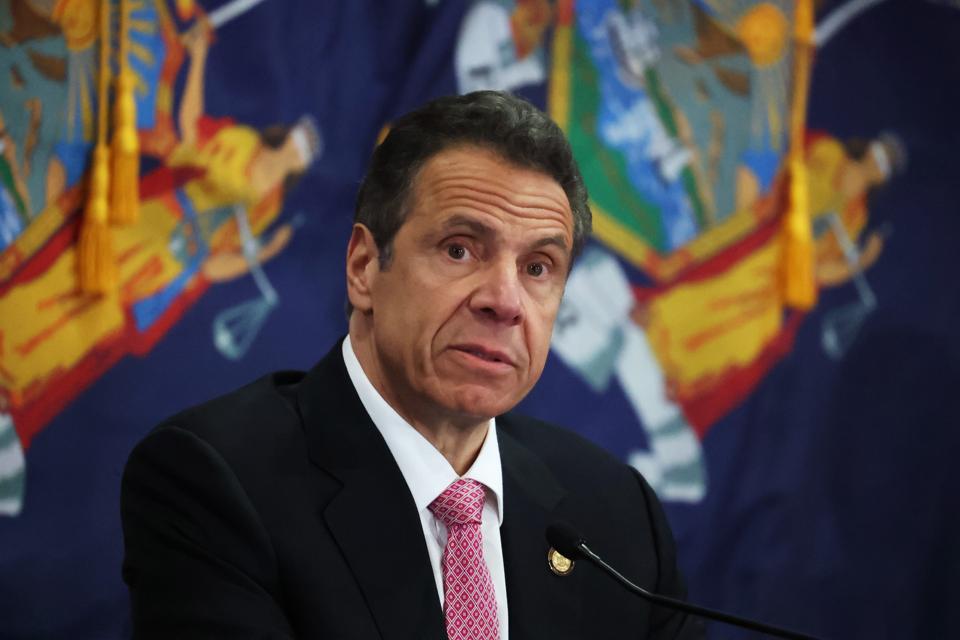 Half of New York’s ten regions have begun a phased reopening.

The number of total hospitalizations and intubations were down again on Saturday, though the overall decline from the peak has been “relatively slow,” Cuomo said.

The number of new coronavirus hospitalizations per day is down to around 400, which is “right about where we were when we started,” he said.

Another 157 New Yorkers died from the virus on Friday, up from 132 deaths a day earlier.

Cuomo has repeatedly criticized the Trump administration for bailing out corporations in previous stimulus bills but forgetting about American workers.

“Now the senate must act—smart, and fast,” Cuomo said. He urged them to respond quickly: “Do your job and help the American people! No delay, no special interests and no corporate bailouts.”

Cuomo spoke out against corporate bailouts again on Saturday. “Don’t let them use gov’t money to subsidize employee layoffs… that would betray the trust of the American people [and] that’s what happened in the 2008 bailouts,” he said. “If that isn’t raised sooner rather than later, that’s exactly what these corporations are going to do.” Earlier this week, Cuomo introduced a new proposal called the ‘Americans First Law,’ which would require corporations to give back federal funds if they do not rehire employees to pre-pandemic levels. The legislation will be introduced in Congress by the New York’s delegation, he announced on Tuesday.

That’s how much of a budget shortfall New York state is facing due to coronavirus. “We have a significant economic problem in this state,” Cuomo said on Saturday, reiterating the crucial need for state funding from the federal government. “I’ve made it clear how important it is, I’ve made it clear what’s going to happen to the state budget if we don’t pass that bill,” he said. “If Washington does not make up that shortfall, there will be cuts.”

Five of New York’s ten regions began a phased reopening of some nonessential businesses—including construction, manufacturing and curbside retail—on Friday. The reopening will be contingent upon people continuing to follow social distancing measures. Cuomo said on Saturday that local governments will be doing their part in terms of enforcing compliance, but “still, it’s going to come down to what individuals do.” The state’s executive PAUSE order will be extended to May 28 for regions that do not yet qualify for reopening, including New York City, he reiterated.

“Even as we reopen, we have to remain vigilant,” Cuomo urged. “We want to make sure we don’t go back to the hell that we’ve gone through.”

Did The Oxford Covid Vaccine Work In Monkeys? Not Really

Trump Hints He May Reverse Course And Restore WHO Funding