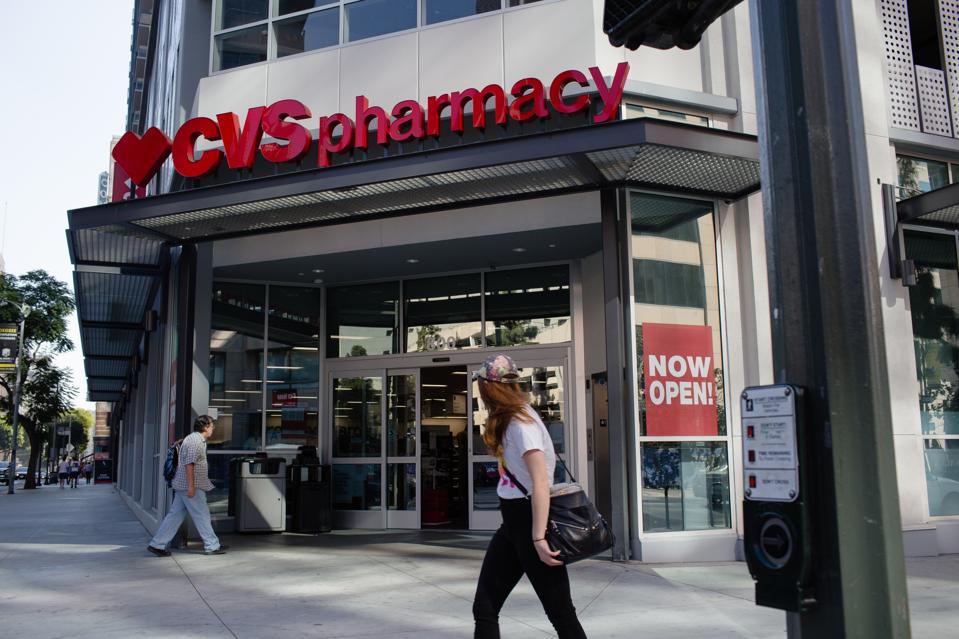 A customer walks towards the entrance of a CVS Health Corp. store in downtown Los Angeles, … [+] California, U.S., on Oct. 27, 2017. In 2020, CVS Health will be rolling out more “zero” and “low copayment” services for Aetna health plan members. Photographer: Christopher Lee/Bloomberg

CVS Health’s top executive said its stores are focused on offering “80% of what a primary care physician can treat” as it rolls out its new HealthHub format and “zero” and “low copays” for certain Aetna health plan members using CVS services.

Speaking at the JPMorgan Chase Healthcare conference Tuesday, CVS chief executive Larry Merlo said the company remains on track to have 1,500 HealthHUBs operating by the end of 2021. This comes after the first 50 HealthHubs opened last year in four markets: Houston, Atlanta, Tampa and the market that includes Philadelphia and southern New Jersey.

“We are confident we are on the right path to creating the most consumer-centric healthcare company,” Merlo told JPMorgan analyst Lisa Gill in an interview webcast from the bank’s annual healthcare meeting in San Francisco. “We have completed a tremendous amount of work over the last 13 months.”

CVS in December of 2018 closed on its acquisition of Aetna, the nation’s third-largest health insurer with more than 20 million customers. As a larger healthcare company that is benefitting from Aetna health plan members, CVS is dedicating more than 20% of its stores to health services that include new durable medical equipment, supplies and various new product and service combinations.

CVS executives say the HealthHubs will tend to be rolled out where there are a large concentration of Aetna members. CVS is rolling out new health plans this year that feature “zero” and “low copayments” for Aetna members who use CVS HealthHubs and the drugstore services, CVS executives on the JPMorgan panel with Merlo said Tuesday.

Though not all of CVS’ more than 9,800 retail locations will convert to HealthHub locations, Merlo said CVS is adding new healthcare services and new personal care items at all of its stores as well as additional services at its MinuteClinics.

The move to add new healthcare services comes as rival retailers in the healthcare space like Walgreens Boots Alliance and Walmart look to fill the emptying space in their brick and mortar stores in the face of changing consumer shopping habits driven by online retail giant Amazon and others.

But Merlo told JPMorgan’s Gill “there is a physical role for bricks and mortar.” As new healthcare services and personal items have been added to the HealthHubs, CVS is seeing more foot traffic and more purchases. “We see the HealthHubs has an evolution of the drugstore,” Merlo said. “We talk about the need to make healthcare local.”