Breaking
U.S. House Passes Bill To Create First Crypto...
Top 3 Lessons For Financial Independence
The Ultimate Guide to Saving Money
Lights, Camera, Action—Is There A Post-Covid Future For...
7 Ways to Reduce Human Errors in Your...
How ‘Couples Therapy’ Used Technology To Cope With...
Can You Settle Your Student Loans Or Negotiate...
7 Best Practice PR Tips For Your Next...
How to Use Amazon Attribution For Ad Campaigns
What are the Makings of a High-Quality Link?
How To Quickly Start And Scale Your Business
Terra Virtua: What NFTs Can Teach Us About...
5 Easy Steps To Prepare Content For E-A-T...
Physical Inactivity Linked To More Severe Covid-19 Infection...
The 2021 Estimated Tax Dilemma: What Tax-Return Pros...
Want To Digitally Transform Your Business? Start With...
Home Technology Cycles For Key Workers Map Goes Live In Lockdown U.K.
Technology 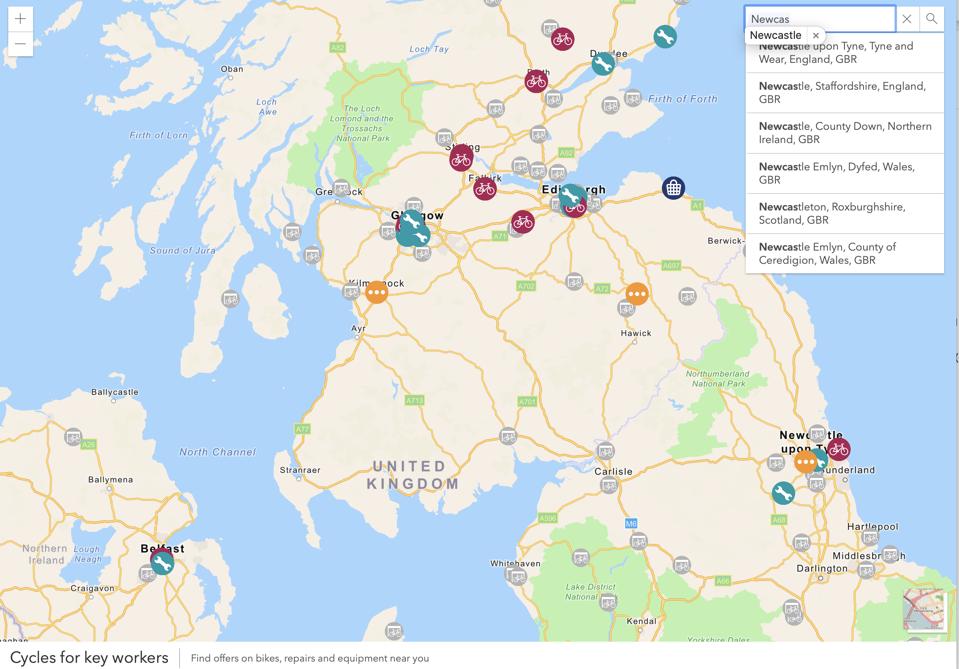 Key workers in the U.K. who want to start cycling to work, or keep their bicycles on the road, can now locate their nearest open bike shops and also get details on offers introduced during the lockdown, including the free use of bicycles. The information has been included on the Cycles For Key Workers Map compiled by cycling and walking charity Sustrans.

Currently, around 40% of the U.K. workforce are classed by the U.K. government as key workers, including NHS employees, cleaners, carers, and supermarket workers.

The Cycles For Key Workers Map is in addition to the list of open bicycle shops provided jointly last week by the Bicycle Association and the Association of Cycle Traders.

The new map is supported by the Department for Transport, British Cycling, Cycling U.K., Living Streets, and the Ramblers.

“We hope the online map will prove useful for everyone needing to cycle to work, be it an experienced commuter who may need a spare part or a novice who needs access to a cycle,” says Susie Dunham, development director at Sustrans.

Greater Manchester’s cycling and walking commissioner Chris Boardman welcomed the initiative: “I’m so pleased Sustrans, with the backing of all major bicycle organizations, came together to help turn the small acts of kindness from those in the industry, into a national movement to aid key workers.”

(Incidentally, Boardman has been donating replacement machines to some of those NHS workers unlucky enough to have had their bicycles stolen during the COVID-19 pandemic—he has an eponymously-named bicycle brand and has reached out to many medics via direct messages on Twitter.) 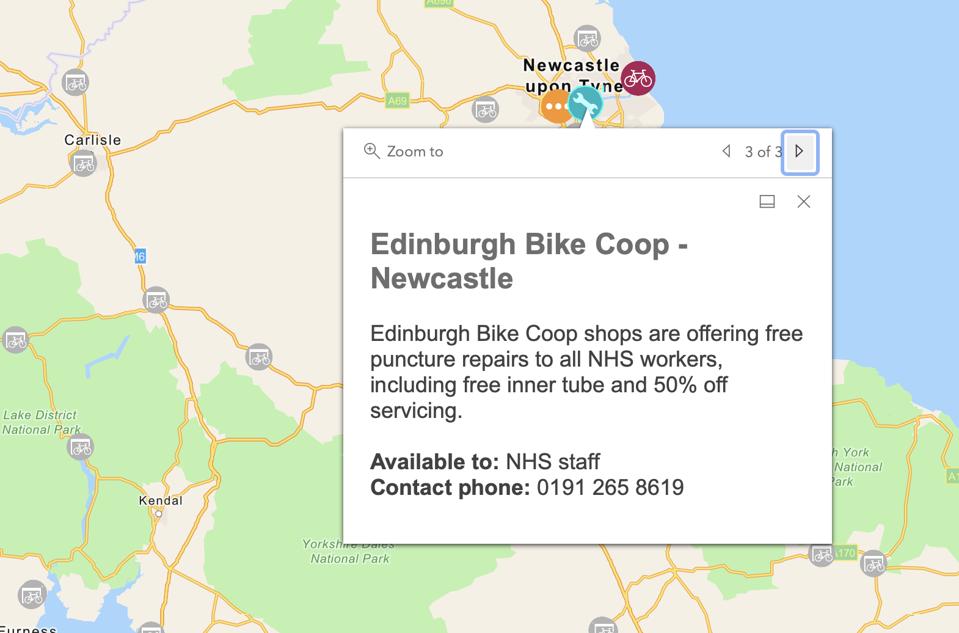 Free puncture repairs for NHS workers from branches of Edinburgh Bike Coop, including this one in … [+] Newcastle on Tyne.

Among the offers for key workers included on the map are cycle-themed discounts from the Health Staff Discounts website, free puncture repairs for NHS staff from Edinburgh Bicycle stores, and free labor for bike servicing and repair for NHS staff offered by the London Cycle Workshop.

There’s also information on Wheels For Heroes from Brompton and U.S.-based Airbnb-style peer-to-peer bicycle rental platform Spinlister. The initiative—flagged with the tagline “free your bike from isolation”—is a way of matching medics with privately-owned underused bicycles.

Spinlister CEO Mark Gustafson told me by email that Wheels For Heroes will start with Brompton folding bikes—including demo bikes in Brompton-owned stores—but expand to any make of bicycle.

“Spinlister is in a position to get bikes to people who need them during this crisis,” he added.

That bicycles are resilient vehicles is a sentiment echoed by Boardman. Cycling, he says, is “playing its part in helping us through this crisis and beyond.”