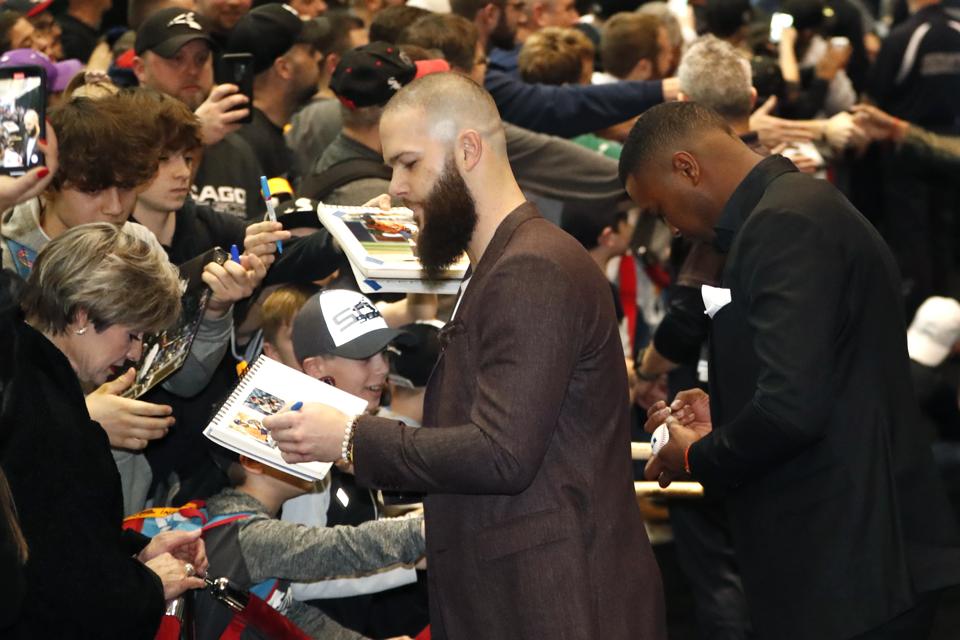 Dallas Keuchel is just one piece of a White Sox rebuilding plan that is nearing a crescendo following a winter that general manager Rick Hahn characterized Friday as “very busy.”

But as Keuchel prepares to begin anew with a team that is paying him $55.5 million over the next three years in hopes of bringing a World Series championship back to Chicago’s South Side for the first time since 2005, his past is what made news on Friday.

Keuchel became the first player to apologize for an Astros sign-stealing scandal that cost manager A.J. Hinch and general manager Jeff Luhnow their jobs and led to the firing of both Red Sox manager Alex Cora and Mets manager Carlos Beltran.

“First and foremost, I think that apologies should be in order, if not for everybody on the team,” Keuchel said on Friday at the first day of the White Sox’s annual winter fan convention. “And when the stuff was going on, it was never intended to be what it’s made to be right now. I think when stuff comes out about things that got on during the course of a big-league ball season, it’s always blown up to the point of, ‘Oh gosh this has never happened before.’

“I’m not going to go into specific detail, but over the course of the playoffs in 2017 everybody was using multiple signs. For factual purposes, when there’s nobody on base, when in the history of Major League Baseball has there been multiple signs? You can go back and watch film of every team in the playoffs, there were probably six out of eight teams using multiple signs. It’s just what the state of baseball was at that point in time. Was it against the rules? Yes it was. And I personally am sorry for what’s come about, the whole situation. It is what it is and we got to move past that. I never thought anything would’ve come like it did. I, myself, am sorry.”

Keuchel, who played a key role in the Astros winning the 2017 World Series, downplayed the severity of the measures the team went to as part of their scheme to gain a competitive advantage. But unlike his former Houston teammates Jose Altuve and Alex Bregman, who continue to sidestep questions about the Astros’ missteps, Keuchel – who won the 2015 Cy Young Award and who went 8-8 in 19 starts last season with the Braves – acknowledged Friday that the Astros were indeed in the wrong – even if the sign-stealing wasn’t taking place in every game the Astros played.

When asked about former teammate Mike Fiers, who outlined how the Astros stole signs in 2017 in a recent interview with The Athletic, Keuchel characterized the subject as “tough” and kept his comments brief when it came to talking about the player who has now been pinpointed as the whistleblower in the cheating scandal, which involved the Astros using a center-field camera to steal opponent’s signs and relaying them to batters by banging on trash cans in the dugout.

“It’s such a tight-knit community in the clubhouse and baseball especially. You’re playing 162 games at least in the regular season, plus spring training and maybe the playoffs if you’re lucky,” Keuchel said Friday. “So you’re pushing 185, 200 games and it sucks to the extent that the clubhouse rule was broken.”

While Fiers has been both praised and criticized for exposing the truth, Major League Baseball has and will continue to investigate whether other teams used their own form of sign-stealing. As for Keuchel, who will be part of a revamped White Sox starting rotation that will likely put Chicago into contention for an American League Central Division title and possibly more, the veteran left-hander is focusing on the future with his new team, but says it’s up to Major League Baseball officials to determine how they monitor wrong-doing moving forward.

“It just happened to come out with the Astros,” Keuchel said. “There are a lot of people who are sorry in that organization, including myself, for what happened. Did our pitchers benefit from any of that? I mean, not really. But at the same time, we might’ve had a few runs more per game. In my instance, I did not. I was actually pretty mad about that. I didn’t really enjoy that sometimes. It is what it is it just happened to come out that Mike said something. Who knows, I don’t think anybody is going to come out and say something from any other teams, they see what happens now.”

As Pressure Mounts, American Says It Can Pass United And Maybe Delta In Profit Margin

RPA Center Of Excellence (CoE): What You Need To Know For Success

11 Lessons From The Legendary Legacy Of Bill...

Advice To Women On Bridging the Retirement Savings...

What The 1918 Pandemic And The Great Recession...

A ‘Memorial Day’ Moon, A Spaceship And ‘Manhattanhenge’:...

How to Get Your Web Developer on Board...