Breaking
Zynga Stock Looks Attractive At $9
How Russian Thieves Use Dark Web To Get...
France Off Travel Corridors And FCO Exempt List
Ask Ethan: Why Are The Moon And Sun...
When To See The Moon And The Planets...
IRS-CI Involved In Largest-Ever Seizure Of Terrorist Organizations’...
The Check Really Is In The Mail. After...
Epic Games Vs Apple: Why You Won’t Be...
Senator Kamala Harris Proposed A Bold Tax Credit...
Deal Terms To Reduce The Risk When Buying...
Multiple Sclerosis Drug Shows Promise For HIV Prevention...
The Neglected Piece Of Retirement Planning
It’s No Longer A Viable Option For Capitalism...
Virtual Credit Cards: An Extra Layer Of Protection...
Lessons From The Rainforest: Human Health Leads To...
Four Easy Ways To Bolster Your Company’s Reputation
Home Business Dallas Radio Host Explains What It Was Like When Jerry Jones Erupted At Him
Business 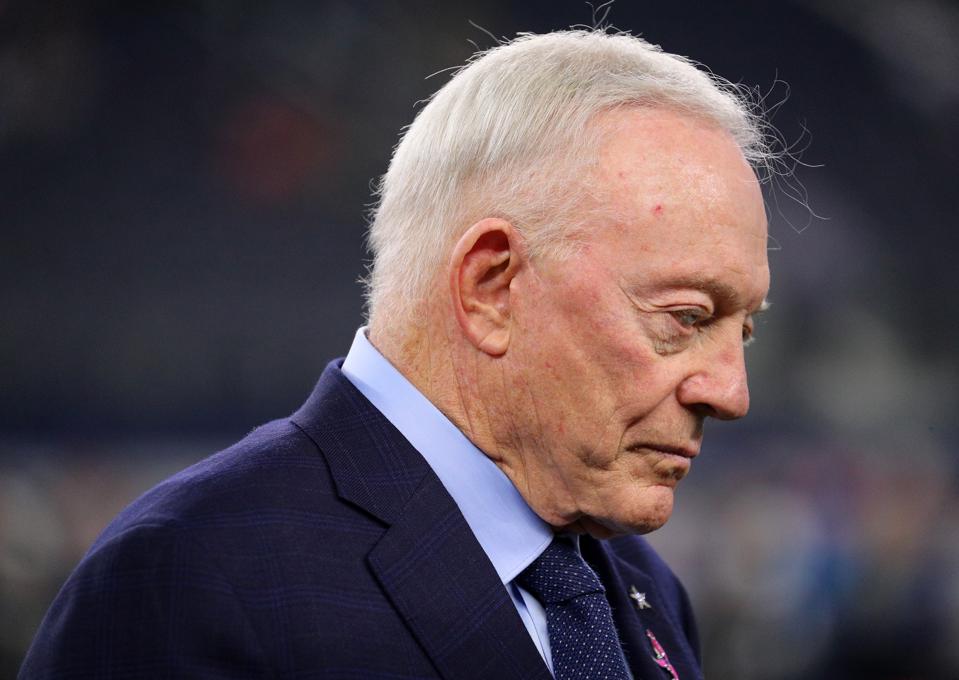 Dallas Cowboys owner Jerry Jones erupted at two Dallas radio hosts Friday after they asked him … [+] whether he was embarrassed by his team’s performance. (Photo by Richard Rodriguez/Getty Images)

Imagine this: you are a big-time sports talk radio host in Dallas and just started your weekly interview with Cowboys owner Jerry Jones. Within seconds, the most powerful sports tycoon in the Lone Star State — and one of the most successful sports and entertainment moguls in the entire country — blows up on you.

Making matters more uncomfortable, your radio station holds a lucrative contract with the Cowboys. Jones is not just a regular guest; he is a guest who drives revenue.

That was the situation on Dallas’ 105.3 “The Fan” Friday morning, when hosts Kevin Hageland and Cory Mageors brought Jones onto the air for his weekly spot. They asked Jones if he was embarrassed by his team’s performance following another primetime loss, and the patriarch of the Cowboys did not take kindly to it.

“Get your damn act together yourself. OK? Settle down just a little bit,” he said. “I don’t like your attitude to come in. I’ve been traveling all night and don’t have the patience to jack with you today.”

The K&C Masterpiece crew kept their composure and proceeded to conduct the rest of the interview — even bearing through a snafu when Jones was dumped after saying ‘b—t’ multiple times. The Cowboys’ owner called back, and even ended on an agreeable note, saying he understood the demands for him to make changes to his coaching staff and roster.

On Saturday, I spoke with Hageland about his now-viral experience, and what he was thinking during those tense moments. The conversation has been edited for brevity.

Alex Reimer: So Jerry Jones comes on the air and blows up at you guys after you ask whether he’s embarrassed — which I think is a totally fair question to ask. Were you surprised he reacted that way, and what were you thinking when you heard him react like that?

Kevin Hageland: I was a little surprised. It’s obviously not the friendliest question in the world, but at the same point, you’re looking at a team that a lot of people thought would be 9-3 — give or take — at this point in the season, but instead you’ve lost three straight, seven of 10 (games). I thought it was a fair question. I know some people think we were trying to elicit this kind of reaction, but that’s foolish. We were looking for answers for ourselves, first and foremost. We’re both Cowboys fans. That was a question that was emblematic of a lot of people in the region.

AR: But again, it’s a totally fair question — almost a softball-like question for a guy like Jerry Jones. But he did promise you that you would ‘have a good visit this morning,’ so that must have been assuring, right?

KH: Yeah, that was encouraging, but then he proceeded to shut down our next two or three questions. At that point, you have to bring it back. I understand how important Jerry Jones is, and I respect the partnership we have with the Cowboys. But at the same time, Cory and I come from a newspaper background, and this is certainly not the first time an interview subject has gotten testy or pushed back against us. I know when we’re wrong, and when we’re not wrong, and we were not wrong in this case. I was prepared to push back, if need be.

AR: I was going to ask you about that — we know how partnerships work. When Jerry reacts like that, doesn’t part of you want to tell him to ‘shut up?’ I mean, I know you can’t say that because of the partnership, but you also don’t want to just acquiesce.

KH: And you’re getting feedback in the moment, too. People are like, ‘You shouldn’t have let him push you around like that.’ But they’re looking at it from the wrong point of view. If it was a random argument on the street, then maybe. But this is on the air for everyone to hear. I’m also a professional. If I can get the answers I want, then I’m fine with how people react. Not all of your interview subjects are going to be friendly. You’re going to have interviews where your subjects don’t want to speak with you. You don’t have to like me, but I want our interview subjects to respect us.

AR: Does your station’s partnership with the Cowboys ever affect your line of questioning with Jerry?

KH: No, and I hope people think that’s obvious, or else I never would’ve asked those questions. Then I followed up later with the question of fans and people on social media thinking this is all on Jason Garrett. Those are questions we wouldn’t ask if we were in the pocket of the Dallas Cowboys. It’s a partnership, but it’s an above the line and 100 % honest partnership. I thought it was an honest question, and frankly, you got an honest response. That level of anger shows — if he thought it was a ridiculous question, he would’ve blown it off. The fact he got mad about it issues some insight into how he thinks.

AR: Do you consider that interview a win? It got so much play. He comes on and he’s instantly upset at you guys. You must be thinking, ‘This is a little uncomfortable right now, but we struck gold here.’

AR: When Jerry said ‘BS’ a couple of times and was dumped, did you guys know that was going to happen? What were you thinking when his line cut off? It seemed like you were caught a little off guard.

KH: I was definitely caught off guard, and this isn’t anybody’s fault, but we had a fill-in board (operator) that day. Our usual board-op was off for the day, so we had a replacement board-op, and my instantaneous reaction — which was probably unfair — was that he had accidentally dropped the phone call. I thought he made the error, but the show goes on no matter what. So I thought he cut off the phone call, and Jerry Jones thought he got hung up on.

AR: How do you think Jerry will be next week?

KH: Here’s a fun note: Monday at 12:00 p.m. (CST) we’ll have Stephen Jones on the show. The first question we have to ask is, ‘Did you hear your dad’s interview with us Friday?’ And then we’ll take it from there.

Mark Jackson Is The Betting Favorite To Coach The Knicks, Followed By Kenny Smith and Ettore Messina