Breaking
How, When And Where You Can See A...
New $2.2 Trillion Stimulus Bill Proposed—$1,200 Stimulus Checks,...
Why Do We Do What We Do? Manipulating...
California Brand Goes All-American As Amazon Bans Foreign...
The 3 Best Analytics Companies of 2020
Senator Cory Booker: Supporting Small, Minority-Owned Businesses Will...
Trump’s Taxes Are Finally Leaked—What’s Next?
Washington Heats Up Ahead Of First Presidential Debate:...
Systemic Racism Leads To Disparities In Nursing Home...
The New Regular: Prepare For Conflicts Of Customer...
Web VR.0 – Have VR Websites (Finally) Arrived?...
This Next Evolution Of E-Commerce Did $18 Billion...
This Next Evolution Of Ecommerce Did $18 Billion...
IRS Taxes Most Lawsuit Settlements And Exact Wording...
13 Questions To Answer Before You Die
Just Launched: Long-Term Stock Exchange For Companies Building...
Home Business Dana White: UFC 249 Will Happen Despite Challenges
Business 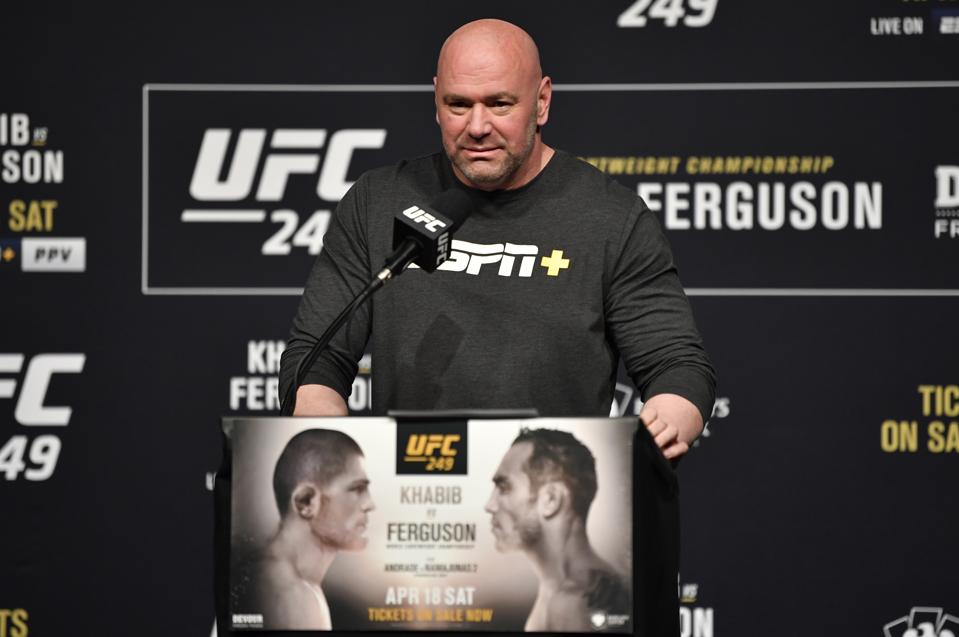 The show will go on.

That’s the message that UFC president Dana White had for fight fans in the wake of the news that lightweight champion Khabib Nurmagomedov could not leave Russia due to travel restrictions. With that, Tony Ferguson, who would have faced Nurmagomedov on April 18 in the main event of UFC 249, was left without an opponent.

“The challenges are that every time I get something figured out, I wake up the next day and the world has completely changed again,” White told the Heavyweight podcast (via MMA Fighting). “Everything that I work hard on the day before, me and my crew, has now fallen apart. It literally just happened to us again today. I woke up today and Khabib Nurmagomedov is in Russia and they just shut down all travel in and out of Russia.

“I woke up this morning and the whole world (expletive) changed again. So back to the drawing board and we’re figuring this out right now as we’re speaking right now, I have people working on this thing as we speak. Listen, I am absolutely (expletive) relentless and I said that this fight is going to go on and it will.”

UFC 249 was initially booked for Barclays Center in Brooklyn, but with restrictions on gatherings because of the coronavirus pandemic, the event has not had a home for the past few weeks. White said he continues to work on nailing down a location. However, the UFC boss does not plan on sharing that location with the MMA media.

“A lot of these media guys are absolute and total (expletive) scumbags. As soon as you let them know what you’re doing, all they’re trying to do is (expletive) up everything that you’ve worked,” White said.

“So I literally told everyone of these guys to go (expletive) themselves and I’m not telling any of them what I’m doing, where I’m doing it but know this — the fight is happening on April 18, some where on planet (expletive) Earth and when you need to know, I’ll let you know.”

ESPN’s Ariel Helwani reported that a lightweight matchup between Justin Gaethje and Ferguson could be in the works as the headlining bout of UFC 249 — wherever it takes place.

Sustainable Infrastructure In The Age Of Coronavirus: “Winners” And Losers