Home Business David Stern Remembered: Not All Stories Are Fit To Print
Business

David Stern Remembered: Not All Stories Are Fit To Print 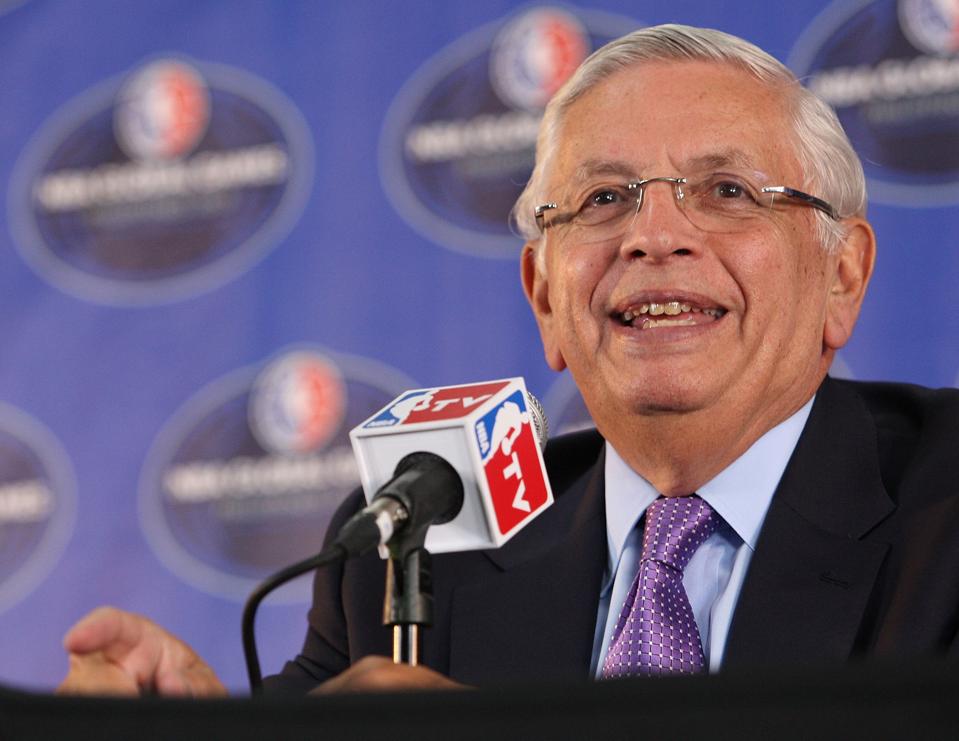 MANILA, PHILIPPINES – OCTOBER 10: Davis Stern at a press conference before NBA match between the … [+] Houston Rockets and the Indiana Pacers at the Mall of Asia Arena on October 10, 2013 in Manila, Philippines. (Photo by Mike Young/Getty Images)

David Stern was a brilliant man with superior wit and intelligence, and as you spoke to his old friends and colleagues Tuesday looking to collect fond memories, one thing quickly became clear: Not all stories are fit for public consumption.

Stern, 77, passed away Wednesday after being stricken by a brain hemorrhage in December. He left behind countless memories for those fortunate enough to cross paths with him, and many of those stories were being retold — some privately, some not.

The ones that were shared with Forbes were good ones, including one from former NBA broadcasting honcho Ed Desser, who was at the league office in the early 1980s when Stern had to fight — unsuccessfully as it turned out — to get the slam dunk contest on TV. 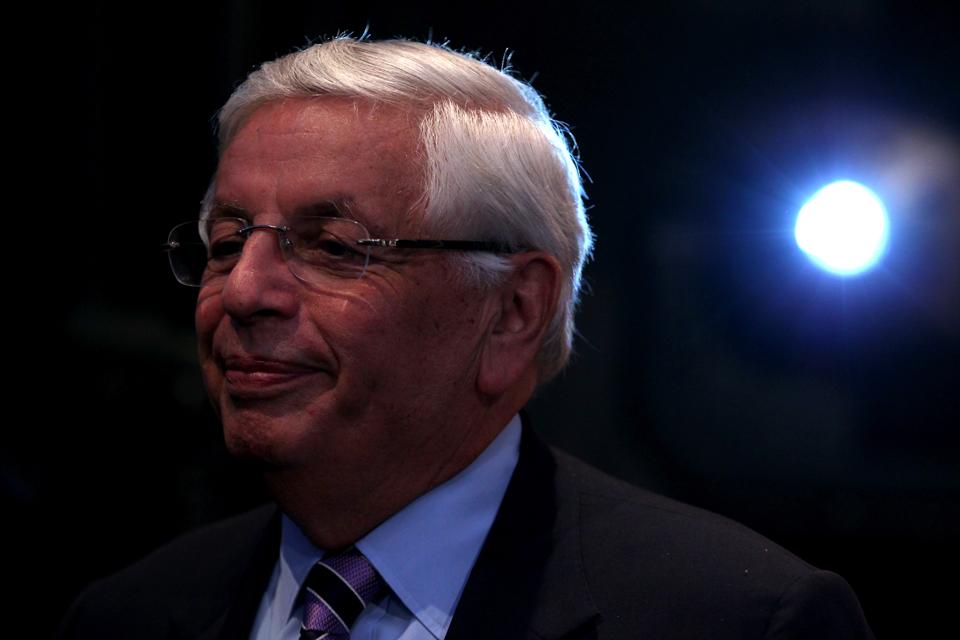 NEW YORK, NY – JUNE 27: NBA Commissoner David Stern looks on prior to the start of the first round … [+] during the 2013 NBA Draft at Barclays Center on June 27, 2013 in in the Brooklyn Borough of New York City. NOTE TO USER: User expressly acknowledges and agrees that, by downloading and/or using this Photograph, user is consenting to the terms and conditions of the Getty Images License Agreement. (Photo by Mike Stobe/Getty Images)

Desser recalls being in a 15th floor conference room at NBA headquarters in midtown Manhattan with a group of executives from CBS, whose priorities back then, according to Desser, were the NFL, The Masters, the NCAA tournament andf pretty much nothing else.

“Everyone’s jaws sort of dropped — what is the commissioner doing standing on the table” — but he was making his point.”

That was the year that Stern unsuccessfully tried to get CBS to televise the slam dunk contest from All-Star weekend, with Julius Erving recreating his dunk-from-the-foul-line trick that he first showed at an ABA slam dunk contest.

The contest ended up being televised — but only on a two-week delay on ESPN despite Stern’s efforts to the contrary. 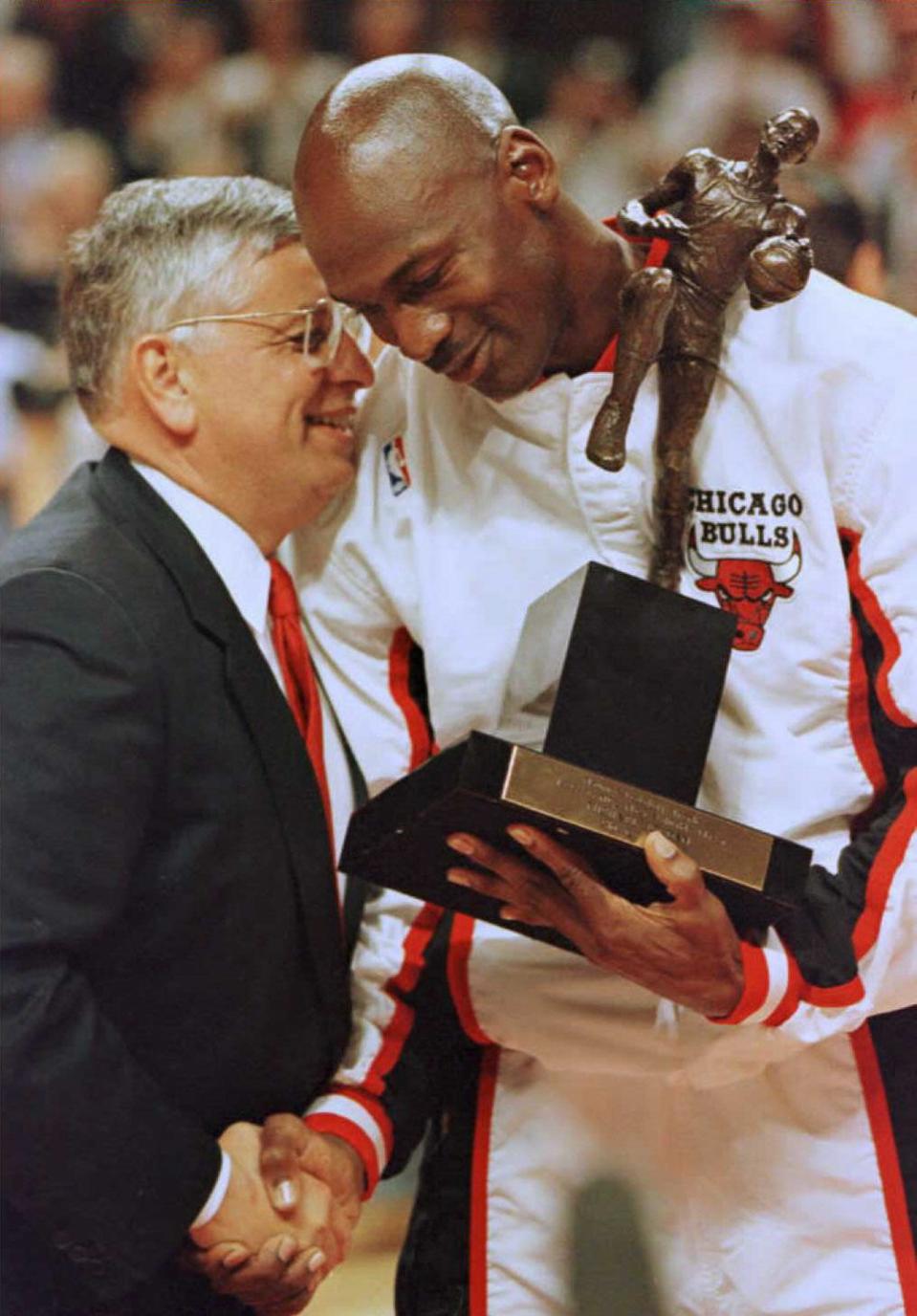 Brian McIntyre was the executive vice president for media relations under Stern and recalled getting a phone call from Lakers beat writer Steve Springer of the Orange County Register after Springer had gone to lunch with Clippers owner Donald Sterling and was calling the league office to do some fact-checking.

“Steve wanted to check out comments that indicated David was a big endorser of a Sterling idea or two, and Springer was skeptical. So I go into David relay the message, and ask him: ‘What do you want to do as a response?”

He said “give me a second” and began thinking.

Stern finally spoke: “Tell Steve this: I don’t comment on private conversations, either real or imagined.”

McIntyre also told a story about Feets Broudy, the former timekeeper at Madison Square Garden who Frank Layden once said had won more games for the Knicks than Red Auerbach through his prudent use of the scoreboard clock.

Medical issues forced Broudy to give up his timekeeper role, but McIntyre recalls learning that Stern had arranged for Broudy to attend all Knicks home games with a seat right behind his old one and was paying for it, transportation to and from the games included, out of his own pocket.

“He did a lot of stuff like that and just didn’t tell people,” McIntyre recalled. 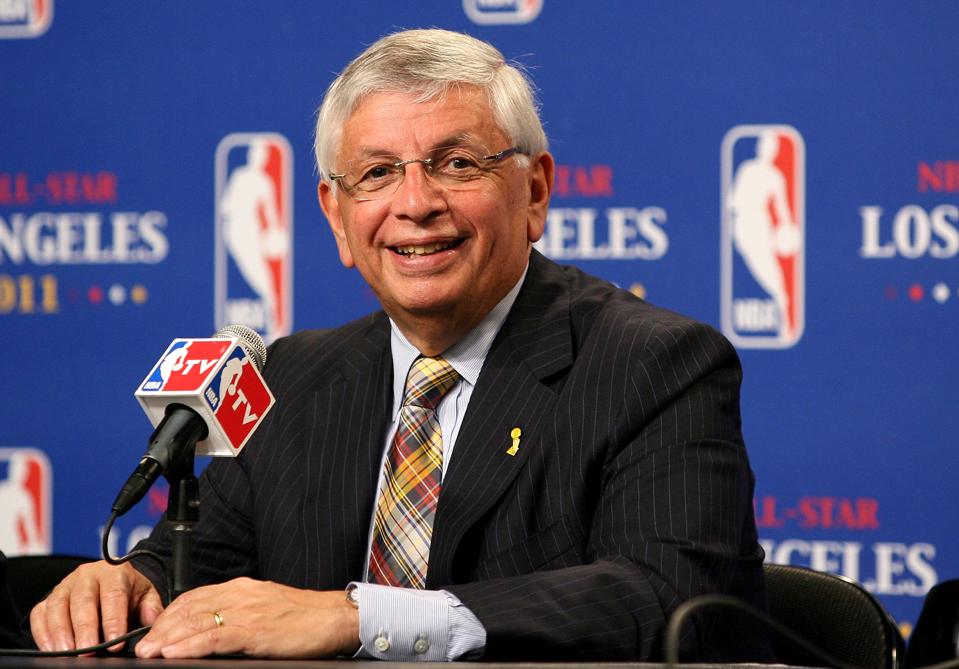 LOS ANGELES, CA – JUNE 07: NBA commissioner David Sternn smiles during a news conference to … [+] announce Los Angeles as the host of the 2011 NBA All-Star Game before the start of Game Two of the 2009 NBA Finals between the Los Angeles Lakers and the Orlando Magic at Staples Center on June 7, 2009 in Los Angeles, California. NOTE TO USER: User expressly acknowledges and agrees that, by downloading and or using this photograph, User is consenting to the terms and conditions of the Getty Images License Agreement. (Photo by Jeff Golden/Getty Images)

Stu Jackson recalled having Stern at a Big East meeting to discuss officiating problems that were plaguing the college basketball league, and though Jackson’s story was not funny, it was insightful.

“We had an issue with officiating, and I made the mistake of expressing my view on the matter,” Jackson recalled. “He stopped me in my tracks and said ‘You think?’ You mean you don’t know?” And I said, “I’m not sure.”

“And he read me the riot act and basically said don’t ever come to him with an issue that didn’t have the facts. I was always grateful for that moment, it offered a very valuable lesson of how you deal with a CEO. It helped be in my own preparedness and to learn to dig a little bit deeper before bringing something to him.”

Illinois Sells $3.2 Million Worth Of Marijuana On First Day Of Legalization