Breaking
How To Get Your Startup Business Off The...
How To Create A COVID Safe Construction Site
How to Make a Good First Impression at...
Nvidia’s Stocks May Plunge 12% Following Its Deal...
Stoke Tank Empty? Check Out Social Media Celebs...
Ask Larry: What Happens To The Money Withheld...
How Far Will Tech Decline?
How AI Platforms Are Improving Talent Management In...
How To Stand Out When Clients Go Searching...
‘Decoding Porygon’: Steps And Rewards For Porygon Community...
US Postal Service Files A Patent For Voting...
7 Business Leaders Share Their Self-Care Secrets
Apple Boosts IPad Air Performance By 40%…And Other...
Biden Was Right. The Hispanic Market Is Incredibly...
Plan To Buy An Electric Car? Is A...
Covid-19 Death Toll In U.S. Passes 200,000
Apple iOS 14 Has 25 Great Secret Features
5 Decisions That Will Increase Your Chances Of...
Coronavirus Is Shaping Up To Be Very Bad...
Home Finance Delta To Lead Off Fourth-Quarter Reporting Season With Big Numbers Rivals Likely Won’t Match
Finance

Delta Airlines is expected to report strong fourth-quarter and full-year profits Tuesday morning and to set a standard for financial performance coming out of 2019 that most other big U.S. airlines aren’t expected to match.

That’s not to say that the likes of American, United, Southwest, JetBlue, Alaska Airlines and other publicly traded U.S. carriers had a bad fourth quarter. Far from it. But unless Delta springs a major and unlikely negative surprise, the Atlanta-based giant carrier should make it clear Tuesday that it is continuing to pull away from the field in terms of financial performance. 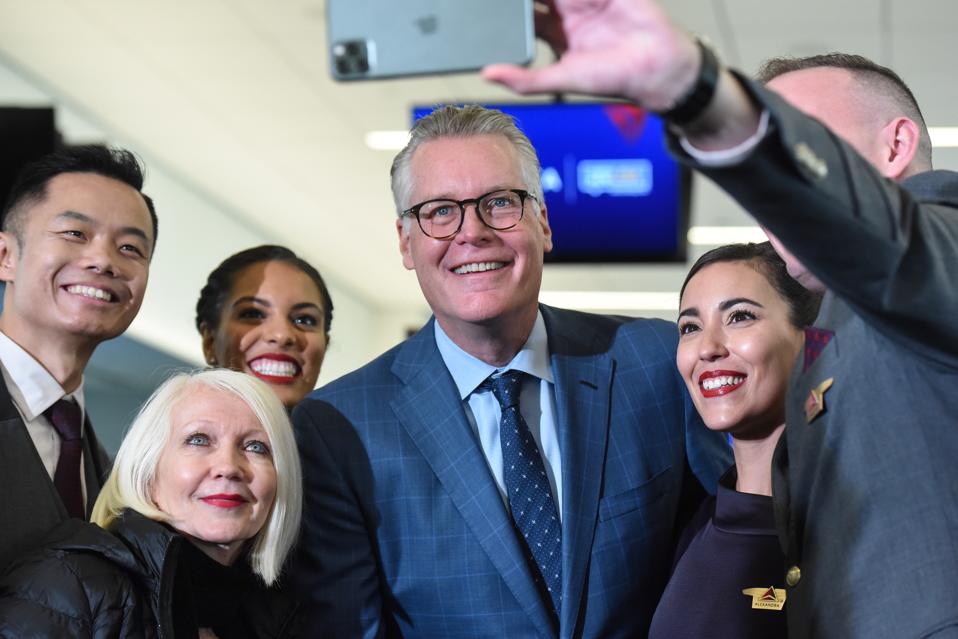 United and JetBlue are expected to report their fourth quarter and year-end earnings on Jan. 22. The next day American and Southwest are scheduled to report their earnings. Alaska, which last year absorbed the operations of the former Virgin America, reports on Jan. 28.

Delta, which in some respects related to size – including total revenue – has moved into first place among U.S. and global carriers, is expected to report fourth quarter profits of around $1.40 to $1.45 a share, according to analysts’ published and “whispered” forecasts in recent weeks. That would top the impressive $1.30-a-share profit the airline reported from the fourth quarter of 2018 on revenue totaling $10.7 billion. Fourth quarter 2019 revenue could come in between $11.3 billion and $11.6 billion, assuming the carrier’s revenue growth trends from the first nine of months of last year extended through the fourth quarter.

That kind of performance potentially could push Delta shares up closer to their 12-month peak of $63.44 back in July, provided no extraneous issues push the market down and that Delta does not announce surprise accounting charges or an unexpectedly negative forecast. Nor is it clear whether Delta’s current share price – $59.49 at the close on Monday – already fully reflects its expected strong profits announcement.

Overall, Wall Street is expecting a generally more modest level of profit growth reports based on fourth quarter economic activity. And that holds true for most airlines.  Analysts expect American to report revenue growth of around 3.8% in the fourth quarter vs. the fourth quarter of 2018. While that’s a strong growth figure for airlines that historically saw considerable weakness in the fourth and first quarters, it’s well shy of the 6% to 8% or so increase in revenue expected to be reported by Delta.

United, meanwhile, already has disclosed that its fourth-quarter results will be impacted by a $90 million charge for the impairment of its Hong Kong routes, which have seen a huge drop in demand over the past six months as a result of continuing and sometime violent classes between protesters and Chinese officials over the communist Chinese government’s efforts to bring the once-free wheeling and booming Hong Kong’s capitalist free market more under its control. The $90 million impairment charge United will take effectively means the carrier is writing down the value of its investment in and long-standing service to Hong Kong to $0. That somewhat clouds analysts’ expectations for United’s fourth quarter numbers, even though the carrier’s revenues all year ran around 5% higher than in 2018.

Southwest, meanwhile, is expected to report record or near-record fourth quarter profits, yet it remains a story of what might-have-been. As the world’s largest operator of Boeing 737s and the lead customer for the newest version of that plane, the 737 MAX, Southwest was to be operating 75 of those new planes by year’s end. Instead it had only 35, and all of those had been grounded since March because of the worldwide grounding of the MAX in March 2018. The grounding came after two deadly crashes raised serious concerns about design changes that impacted the way the MAX handles relative to earlier 737s and the lack of additional training on those handling changes given to pilots. That grounding has kept Southwest from growing its operations at the better than 6% clip it previously had expected. An early December settlement worth $125 million with Boeing covering at least some of the economic damage caused Southwest could modestly and positively impact Southwest’s reported fourth quarter results, assuming the money from that settlement is recorded in the fourth quarter.

American and United also had 25 and 15 737 MAXes in their fleets, respectively, at the time of the grounding and have suffered some of the same economic impacts as Southwest, albeit to lesser degrees.

JetBlue, though much smaller than the Big Four of Delta, United, American and Southwest, now ranks as the nation’s fifth-largest airline. Earlier this year it was reporting unit revenue increases of around 3% over 2018 (unit revenues is the average amount of revenue received for flying one seat one mile). But in the third quarter weakening demand for travel to the Caribbean, where it has lots of service, pushed unit revenue growth slightly into negative territory. The carrier responded by reducing capacity a bit in the region and bring its operating costs down to something more in line with actual demand. But make predicting fourth quarter results a bit more difficult. In any case, declines in jet fuel prices and other direct operating costs, plus overall demand that remains strong, especially in relation to historical winter time demand for airlines, mean that JetBlue is expected to remain solidly profitable in the fourth quarter. It also is expected to more profit growth in 2020 as the impact of the redeployment of some aircraft into better-performing markets and the addition of extra seats and a new coach class pricing model take effect this year.