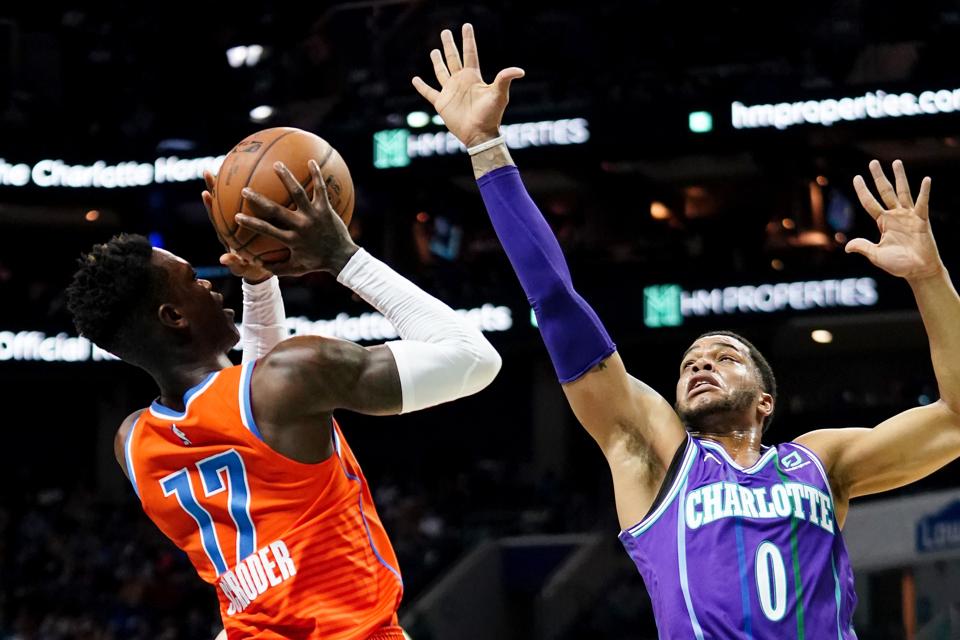 CHARLOTTE, NORTH CAROLINA – DECEMBER 27: Dennis Schroder #17 of the Oklahoma City Thunder takes a … [+] shot while being defended by Miles Bridges #0 of the Charlotte Hornets during the first quarter during their game at the Spectrum Center on December 27, 2019 in Charlotte, North Carolina. NOTE TO USER: User expressly acknowledges and agrees that, by downloading and/or using this photograph, user is consenting to the terms and conditions of the Getty Images License Agreement. (Photo by Jacob Kupferman/Getty Images)

The Oklahoma City Thunder have not had an NBA Sixth Man of the Year Award winner since James Harden won it in the 2011-12 season. With the outstanding play of Dennis Schroder this season, that could finally change.

When looking at the winners of this award over the past decade or so, it seems there is a common trend – guards that score at a high level.

Dennis Schroder certainly fits this mold. Averaging 18.4 points per game this season, he leads all bench players in scoring. He is scoring efficiently at all levels, shooting 83.8 percent from the free throw line, 35.1 percent from deep, and 50.4 percent in the mid-range game.

Looking at all NBA players, not just bench players, Schroder is one of the hottest offensive players in the league. Not only has he scored 31 points twice already this season, but he also is on a long scoring streak.

Averaging 30.3 minutes per night, Schroder is one of the most important players in the Thunder’s success this season, even off the bench. Outside of scoring the ball, he has shown great effort and aggressiveness on the defensive end as well as produced 3.8 rebounds and 3.7 assists per contest.

On a team with a variety of high-level scorers, Schroder often finds himself as the team’s leading scorer in games. In fact, he’s just second behind Shai Gilgeous-Alexander in games in which he is the leading scorer with ten games.

Schroder, although not a starter, often finds himself closing out games. His scoring down the stretch has proven extremely useful as Oklahoma City rolls out their three point guard lineup.

Oklahoma City produces an average of 38.6 bench points per game (good for 10th in NBA) and Schroder accounts for 47.7 percent of that production. In fact, his production is not far off from several other teams’ entire bench average.

Schroder’s 18.4 points per game is just under what several of these likely playoff teams’ benches scores as a whole. This goes to show just how beneficial his scoring spark off the bench has been for the Thunder this season. It is clear that Schroder could start at point guard for a couple of teams around the league, but fits nicely off of the bench in Oklahoma City.

Still just 26 years old, with a contract worth $15.5 million per year through the 2020-21 season, Dennis Schroder has been excellent in the 2019-20 NBA season. As a current frontrunner for the NBA Sixth Man of the Year Award, he could be the first to win it in Oklahoma City since James Harden.

12 Phrases Transformational Leaders Use To Get Amazing Results

‘The Witcher’ Is Netflix’s Second Most Popular Original...

Bitcoin’s Huge Surge This Week Could Be The...