Breaking
Sunday’s Google Doodle Is Actually About Google
Office Of The Comptroller Of The Currency Chief...
Source Code For Multiple Windows Operating Systems Publicly...
Why Forgettable Pfizer Really Is A Great Value...
Hot For The Holidays? Amazon Home Drone, Kid...
Best Small Business Loans
The FAAMG Stocks Drive The Markets
Mall Of America Extends A Hand Of Unity...
Surprise Samsung Galaxy S20 FE Beats Google Pixel...
After Apple And Tesla, Berkshire And Amazon Should...
Is It Wrong To Be Rich In Poor...
‘C&C’ Is 25: How ‘Command & Conquer’ Revolutionized...
Archeologists Vs. Spirit Mediums Exhuming Human Remains In...
Blow To Bitcoin As Portnoy Warns Cryptocurrencies Are...
What an Effective Business Cloud Must Include
5 Ways to Make Running a Business Easier
Home Technology Deontay Wilder Vs. Tyson Fury: Watch The ‘Bronze Bomber’s KO Wins (VIDEO) Ahead Of Saturday’s Rematch
Technology 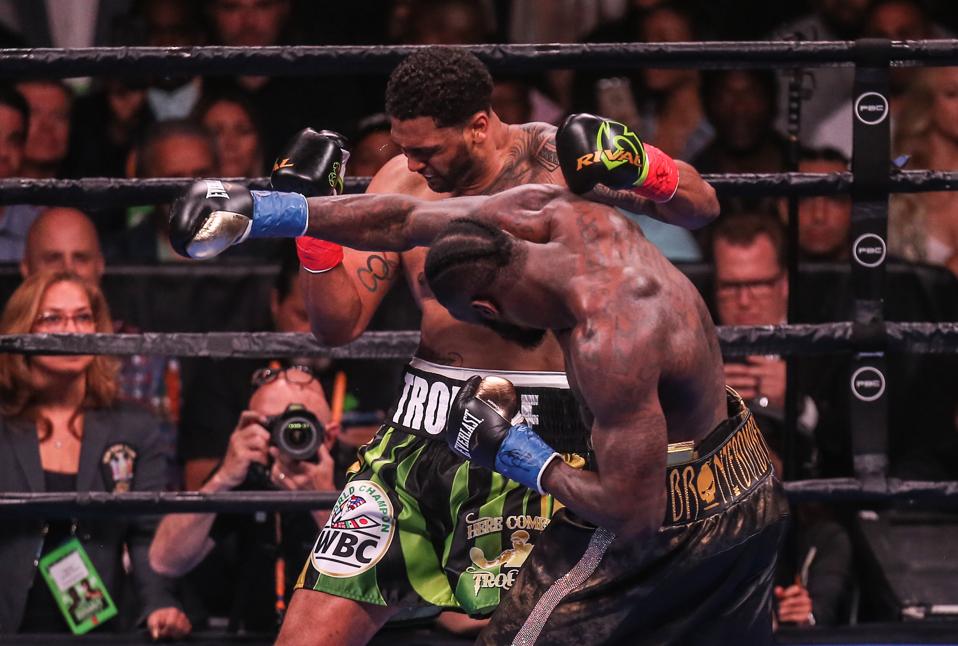 WBC Heavyweight Champion Deontay Wilder and Tyson Fury will look for a definitive winner in their rematch on Saturday.

Wilder knows only one way to remove all doubt, and that’s by winning by KO.

He has knocked down or stopped every fighter he has faced in his 42-0-1 career (41 KO). No other heavyweight in his era can make that claim. Only two men have gone the distance with Wilder, and that’s Bermane Stiverne in January 2015, and Tyson Fury in December 2018.

Wilder has already rematched and starched Stiverne inside the first round. He’ll be looking to do something similar to Fury on Saturday when the two men meet for a rematch in Las Vegas.

Before the highly anticipated heavyweight clash, let’s look back at Wilder’s destructive KOs.

Wilder-Fury II is the biggest fight of 2020 so far, and there is a decent chance it keeps this distinction throughout the year. That likely depends on whether Floyd Mayweather Jr. comes out of retirement again, and what happens with Manny Pacquiao.

A Wilder vs. Anthony Joshua unification bout would also likely trump this fight, but Wilder needs to get past Fury on Saturday, and that’s far easier said than done.

Wilder may have caught a break retaining his title via draw in the first fight. Fury outboxed the powerful champion most of the night, but Wilder’s two knockdowns kept him in the fight and saved his title.

Ahead of the second fight, both Wilder and Fury have vowed to win by KO. Fury has even switched trainers going into the rematch because he wanted to chase the KO victory. For his last five fights, Fury had been trained by Ben Davison, but he is hopeful Javan “Sugarhill” Steward can help to lead him to the KO he desires.

Wilder makes no secret of his intentions.

Wilder is one of the most devastating punchers in heavyweight history, and Fury has felt his power. How the challenger will avoid Wilder’s big right hand is perhaps the biggest question heading into the fight.

Will Fury be added to Wilder’s latest highlight reel, or can the challenger do the unexpected and score his own KO? I’ll be covering the fight leading up and after the final bell.