Breaking
Parrot Plumage Color May Be Linked To Body...
Recent Precious Metals Dip A Buying Opportunity
Looking For Venture Capital? Here’s How One 50+...
Growing Your Retirement Money Using 401(k) Dollar-Cost Averaging
Wellness Exec Abby Miller Levy Partners With Venture...
Microsoft Teams Issues Strike To Zoom With Tidal...
What’s Coming For The S&P 500 In October
4 Ways You Can Showcase Empathy With Your...
A $22,000 Microsoft Surface Will Soon Be For...
Zooming In – Should SMEs Invest In The...
iOS 14: The Surprising Security Risk Of Sharing...
How A Break From Lord Sugar Changed The...
Sunday’s Google Doodle Is Actually About Google
Office Of The Comptroller Of The Currency Chief...
Source Code For Multiple Windows Operating Systems Publicly...
Why Forgettable Pfizer Really Is A Great Value...
Home Business Desperation At The Fed Prompts Unsound Thinking
Business 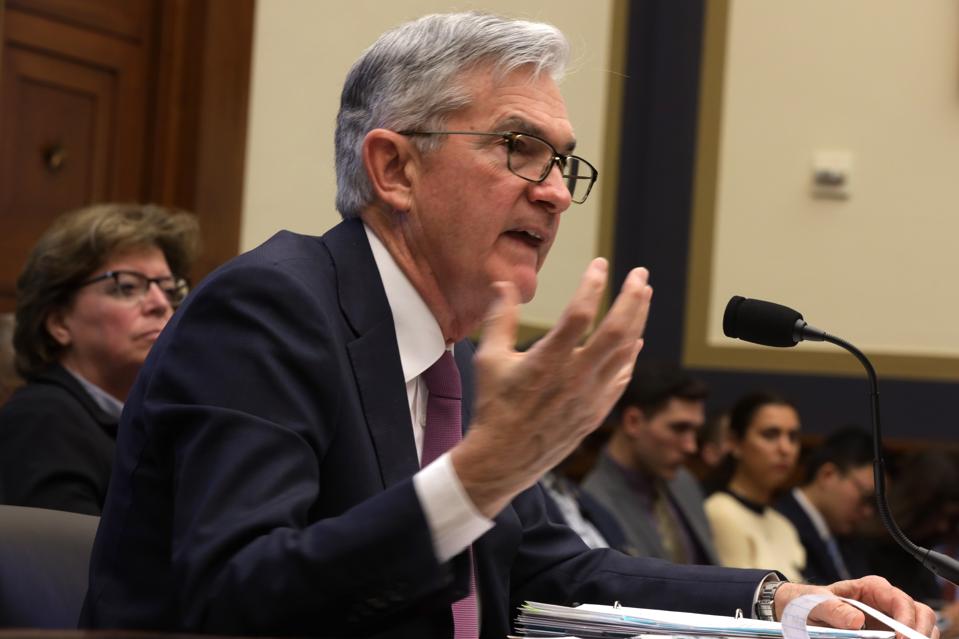 The Federal Reserve (Fed) is considering a radical move. It would set interest rate/yield targets for treasury securities at several maturities, effectively dictating returns along the entire treasury yield curve. Policy makers would force markets to these targets by buying or selling treasury bonds, effectively drowning markets in product should policy want to drive yields up or starving markets of product should policy target lower rates. Typically, the Fed has only targeted short-term interest rates – the so-called federal funds rate at which banks advance each other overnight loans.  Only three times in the past 100 years has the Fed targeted longer yields. Once was during the Second World War and its immediate aftermath. In the 1950s, the Fed aimed to “twist the yield curve,” to use the Fed’s words, by influencing the spreads between short-term interest rates and longer-term yields. It tried the same thing just after the 2008-09 financial crisis. Except when a host of other wartime economic controls were in effect, such efforts have always failed. They will do so again today should the Fed go ahead with its targeting plans.

The most extensive and rigid rate targeting occurred during the Second World War, a truly unique situation. Then, the Fed was acting as part of an extensive effort at economic control. The huge demands of the war effort had forced a command economy on this country. Washington dictated production quotas and rationed civilian buying. It imposed powerful wage and price controls. In the circumstance, the Fed was no longer involved in its usual function of ensuring efficient financial markets to serve a free economy. It was instead facilitating the Treasury’s need to finance the war. Setting rates along the entire treasury yield curve may not have been the best way to meet the needs of the moment, but in the circumstance it was not an unreasonable approach.

The two other times the Fed has tried to set longer-term rates directly were less successful. Each stemmed from concern among policy makers that the usual approach of targeting just short-term interest rates was failing the economy’s needs. The Fed reasoned each time that because businesses usually raise capital from longer-term loans or credit instruments, influencing longer yields would have a more direct effect on business decisions. No doubt the Fed feels similarly now.

The failure during the 2008-2009 recession illustrates. During the financial crisis, the Fed counteracted the liquidity shortfall in markets and the collapse it threatened by pushing short-term interest rates down to near zero and otherwise injecting funds into financial markets by buying bonds directly through what it called “quantitative easing.” That seemed to work in the crisis. At least the county’s financial markets continued to function. But once the crisis passed, the economic recovery proceeded at a disappointingly slow pace, especially hiring. Even with short-term rates still near zero and financial markets flush with liquidity, businesses remained reluctant to borrow for hiring and expansion generally. That was understandable, the crisis had instilled a lot of fear among business decision makers. What is more, Washington rhetoric at the time frowned on profits while policy favored higher taxes and more extensive regulation.

Policy makers at the Fed thought it might jump-start the process of borrowing and expansion to bring down the longer rates at which business typically borrows. Accordingly, they tried to twist the yield curve by directing the buying in their “quantitative easing” at those longer maturities.  Businesses took the cue but only partly. They did borrow, but they did not use the funds to expand and hire. Instead, they simply looped the funds back into financial investments, presumably awaiting a time when they would feel more confident about a real economic expansion. Asset prices rose, but the real economy remained sluggish. The same thing is likely to occur now should the Fed move to “twist” the yield curve again and still more dramatically should it dictates target rates along the yield curve.

To be sure, the financial crisis is a more distant memory today than it was in 2010 or even 2014, but business at present nonetheless faces similarly huge uncertainties. One is of course the Covid-19 virus. No one knows its likely course and a vaccine is still a distant and insecure prospect. There is still a significant chance that a spike in infections will force the authorities to re-impose lockdowns and quarantines with all their devastating economic effects. At the same time, the political situation in the United States is far from something that facilitates planning. Perhaps this particular uncertainty will lift after election day, but that is also far from certain. The victor in the November election is not likely to make his plans clear for some time after the vote, and prospects in congress are always iffy. Businesses then, may well take advantage of the low longer rates engineered by the Fed and borrow, but, as before, they are not likely to use the funds to hire and build for a real economic expansion. Asset prices, again, will gain from the Fed’s efforts while the real economy languishes under perhaps a catch-up surge as things re-open.

It is easy to understand the frustration among Fed governors. They want to do the best they can for the economy. But in this situation of uncertainty there is only so much monetary policy can do. Rather than pretend that the Fed has an answer, policy makers would do better to admit the limitations of monetary action to both the rest of the government as well as the public, and perhaps explain the needs matters impose on other aspects of economic policy. That approach not only would be more honest, but it would also keep the central bank for losing credibility by repeating the same failure it suffered 11-some years ago.

The Value Of Putting Heart Into Your Customer And Employee Listening