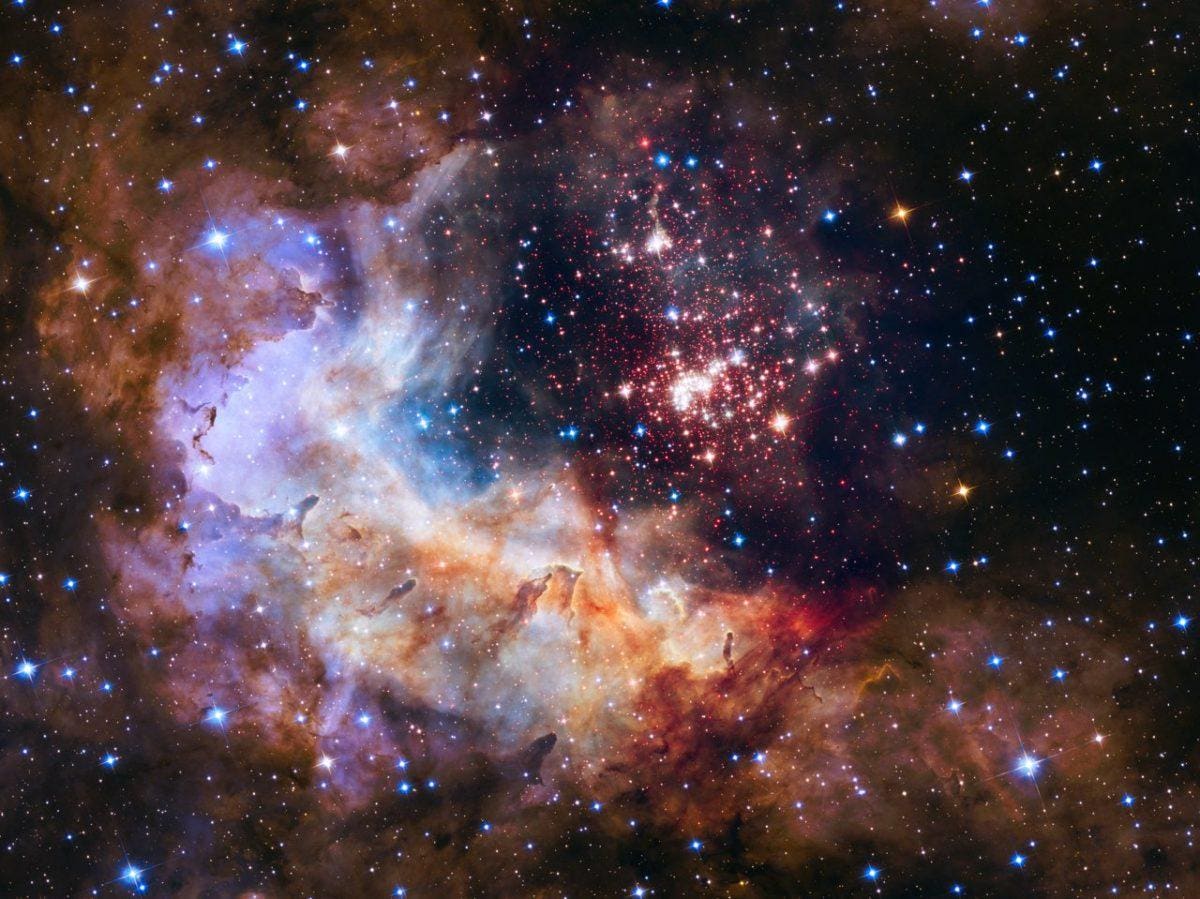 This NASA/ESA Hubble Space Telescope image of the cluster Westerlund 2 and its surroundings was… [+] released to celebrate Hubble’s 25th year in orbit. The image’s central region, containing the star cluster, blends visible-light data taken by the Advanced Camera for Surveys and near-infrared exposures taken by the Wide Field Camera 3.

When stars form in the Universe, they’re created in giant bursts.

A stellar nursery in the Large Magellanic Cloud, a satellite galaxy of the Milky Way. This new,… [+] nearby sign of star-formation produces stellar winds and blows the interior gas to greater distances and higher kinetic energy. New stars, in short, remove normal matter from around the star-forming region.

When giant molecular clouds collapse, new stars form all at once.

This spectacular image of the Orion Nebula star-formation region was obtained from multiple… [+] exposures using the HAWK-I infrared camera on ESO’s Very Large Telescope in Chile. New stars are still forming in this nebula, but they’re almost done doing so, as the hot, young stars are boiling all potential star-forming gas away.

The highest-density gas creates the greatest numbers of high-mass stars.

The giant star-forming region 30 doradus in the gas-rich Tarantula nebula. The most massive stars… [+] known to humanity can be found in the central cluster highlighted at right, with R136a1 coming in at ~260 solar masses. Many multi-star systems and components can be found in the central portion of the cluster, including dozens of stars with masses over 50 solar masses.

These include the hottest, bluest, shortest-lived stars: O-class and B-class stars.

The classification system of stars by color and magnitude is very useful. By surveying our local… [+] region of the Universe, we find that only 5% of stars are as massive (or more) than our Sun is. It is thousands of times as luminous as the dimmest red dwarf star, but the most massive O-stars are millions of times as luminous as our Sun. About 20% of the total population of stars out there fall into the F, G, or K classes, but only ~0.1% of stars are massive enough to eventually result in a core-collapse supernova.

The most massive stars known exist within the Tarantula Nebula, 165,000 light-years away.

The grand star-forming region inside the Tarantula nebula, revealed in the infrared by the Hubble… [+] Space Telescope. The infrared set of wavelengths can pierce through the light-blocking dust, revealing features of the stars inside that cannot be observed in visible light alone.

However, young, massive clusters are rare within the Milky Way.

This image from the Digitized Sky Survey shows star cluster Westerlund 2 and its surroundings.… [+] Although it may not look very impressive, it’s located some 14,000 light-years away. The central ‘bright spot’ near the dense, orange nebula is a collection of many dozens of massive stars approaching 100 solar masses apiece.

Westerlund 2 is our closest example, with 37 very massive stars identified up to 100 solar masses.

Gaps, clumps, spiral shapes and other asymmetries show evidence of planet formation in the… [+] protoplanetary disk around Elias 2-27. How old the various components of the system that will wind up forming are, however, is not something that’s universally known.

Previously, studies of planet-forming disks were restricted to nearby, lower-mass stars.

30 protoplanetary disks, or proplyds, as imaged by Hubble in the Orion Nebula. Hubble is a brilliant… [+] resource for identifying these disk signatures in the optical, but has little power to probe the internal features of these disks, even from its location in space. Many of these young stars have only recently left the proto-star phase. Star-forming regions like this will frequently give rise to thousands upon thousands of new stars all at once.

Those observed disks are currently creating planets, which multiple instruments have independently identified.

However, the central regions of massive clusters may render planet formation impossible.

A young star cluster in a star forming region, consisting of stars of a huge variety of masses. If… [+] stars are too massive, their winds and radiation can blow the dust away, preventing planets from forming around those stars.

Very massive stars are so hot that potentially planet-forming dust has already evaporated away or had its composition altered.

This image shows the sparkling centerpiece of Hubble’s 25th anniversary tribute. Westerlund 2 is a… [+] giant cluster of about 3000 stars located around 14,000 light-years away, while Hubble’s near-infrared camera peers through the dust to find the dense concentration of massive stars at the center.

As a result, they cannot create the stable, early structures that eventually create planets.

Hubble’s near-infrared instruments suggest that planets will never exist around these stars.

The central cluster of Westerlund 2 contains 37 uniquely identified very massive stars, and yet none… [+] of the hottest, youngest stars show any evidence for planet formation. For comparison, more than a thousand stars of lower masses on the outskirts of these clusters do show that evidence.

The James Webb Space Telescope vs. Hubble in size (main) and vs. an array of other telescopes… [+] (inset) in terms of wavelength and sensitivity. It should be able to see the truly first galaxies, the earliest, most pristine stars, the smallest directly imaged planets and more. Its power is truly unprecedented, as it’s more than an order of magnitude better than Spitzer across all relevant wavelengths.