Did Netflix’s ‘Tiger King’ Forget About The Tigers? 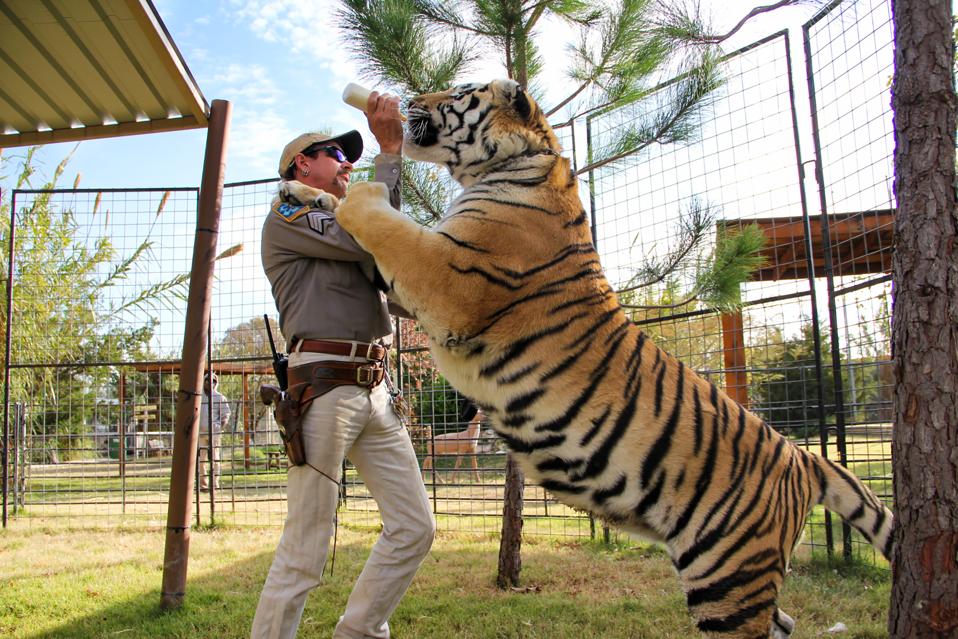 The crazy, chaotic energy of Netflix’s Tiger King proved the perfect antidote to coronavirus anxiety, as 34 million people watched the series during its first ten days on the streaming platform.

Judging from the initial responses on social media, many viewers felt absolutely certain that Carole Baskin murdered her husband (as the documentary strongly implies), while Joe Exotic was hailed as a warped kind of hero, being the protagonist of Netflix’s story.

The series even sparked a semi-satirical #FreeJoeExotic campaign, prompting a reporter to ask President Trump if the titular Tiger King was to receive a presidential pardon; it’s a ridiculous question for the president to receive during a global pandemic, but to be fair, we live in ridiculous times.

Now that the initial shockwave has passed, and the world has had time to fully absorb the madness of the exotic animal trade, some are asking why the filmmakers chose to leave big cat welfare in the background, focusing on the eccentric personalities and unsolved murder-mystery.

It’s not a particularly difficult question to answer; any filmmaker rewatching those clips in the editing room, tasked with crafting a compelling narrative, would absolutely shift focus to the larger-than-life characters in this story. Tigers can’t possibly compete with the electric cast of crackpots featured in this series – they’re far too outrageous to waste.

From an animal rights perspective, there’s much to criticize about Tiger King, but I think it’s important to view the series as what it actually is – a story – rather than what it “should” have been. Tiger King is a sensationalist slice of entertainment, and doesn’t pretend to be anything else.

The plight of the lions and tigers cooped up in Joe’s cages, however, is rarely forgotten; the sight of the majestic creatures sitting forlornly in those tiny cages serves as a constant reminder that Joe and others are severely abusing them for profit. Watching newborn cubs being torn from their mother was disgusting, and it was clear that Joe didn’t give a damn about their welfare; these magnificent predators were treated like oversized plushies.

That being said, Carole Baskin, whatever you think of her, has good reason to be angry about her portrayal; not just the murder mystery thing (which has, inevitably, led to her being harrassed by lunatics), but the implication that Baskin was mistreating her tigers to the same extent Joe was, which is simply false.

Or at least, that’s currently the case. Because Baskin’s sanctuary, Big Cat Rescue, has a complicated history, like everything in Tiger King. As the documentary points out, Baskin used to be incredibly ignorant to the needs of these animals, and during the nineties, even offered a “bed and breakfast” experience that allowed guests to spend the night with a young wild cat in their cabin.

Clearly, Baskin has changed her priorities, having overhauled and reassembled the sanctuary long ago; it’s been a non-profit for years, Baskin now campaigning for a total ban of the private ownership of big cats, regardless of keeping conditions.

From an animal rights perspective, it doesn’t matter what Baskin’s motivations are, or what her history is, considering that she is currently advocating for big cat welfare. Clearly, the exotic animal market is rotten to the core, a wretched hive of scum and villainy – that’s why it made for such great television.

Big cat people, to put it mildly, are extremely weird. Many of them have a warped, Disney-esque perception of the animal kingdom, an infatuation devoid of real respect. Should one really cuddle creatures that are capable of tearing off limbs?

But there is an upside to Tiger King’s sensationalism; due to the documentary’s outrageous content, an extraordinary amount of people are now talking about it. Which means that many more people now understand how deeply immoral it is to own a tiger, pet a tiger, or to have a selfie taken with a cub.

This wasn’t the focus of the documentary, but it’s become part of the conversation, and those big cats desperately needed someone to shine a light on their deplorable living conditions.

Because the most extraordinary thing about this insane series, by far, is that (almost) all of what we saw was perfectly legal.

Real Estate Agents Answer: What Are Your Best...

Lies And The Lying Liars Who Try To...

The Importance Of Cultivating A Passion Outside Of...