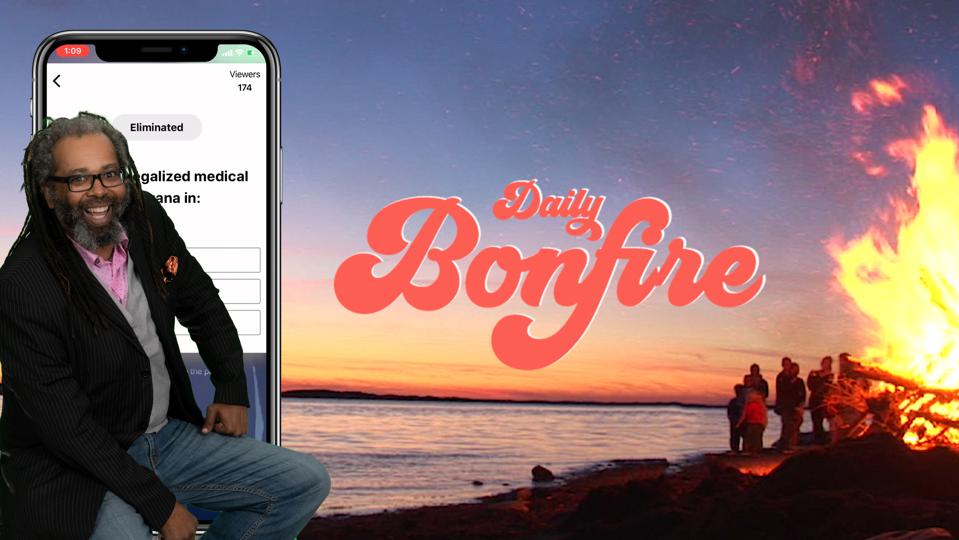 If cannabis, pop culture, games, cash prizes, and the war on drugs had a baby, it would be called the “Daily Bonfire.” The first cannabis gaming app where iPhone and Android users can test their cannabis IQ for a chance to win $420 and support nonprofit organizations such as ACLU, NORML, and MAPS, “Daily Bonfire” begs the question: “Think you’re smarter than a stoner?” Well, if you play your cards right, you may hit the “Daily Bonfire” jackpot (pun intended)… with longtime cannabis lover, activist, journalist, “Cooking on High” Netflix foodie, comedian, and “Daily Bonfire” host, Ngaio Bealum.

WB: Tell me about your path to becoming your persona in the cannabis biz? When was the first time you smoked weed?

Ngaio Bealum= NB: I first smoked weed when I was 12, in 1970-something at sleep-away summer camp. The camp counselors let me stay up late and smoke with them because I was “cool.” The second time was in 8th grade when Alex Studer came to my house, and we smoked a joint but my mom caught us and I got a lengthy lecture on experimenting with drugs. I didn’t smoke weed again until college, and I immediately loved it and the way it made me feel. I became interested in the plant and wondered why cannabis was illegal (the short answer: racism. Look it up). Around 1991, I became a daily smoker and decided to become a cannabis activist. 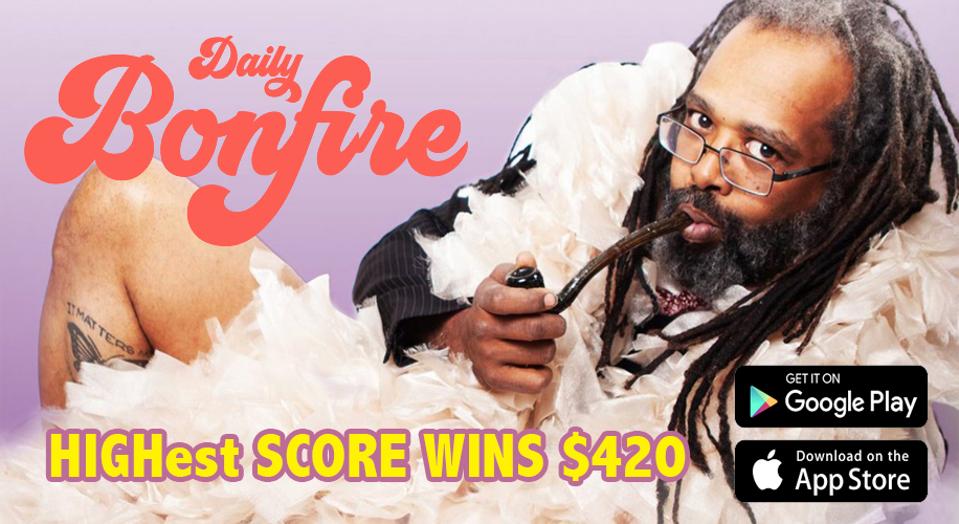 For me, activism is a way to redress many different injustices at once and to help normalize the conversation. Legalization stops police harassment, eases jail overcrowding, deals a blow to the private prison industry, and provides jobs and tax revenue. What’s not to like?

When I became a serious activist, there was a lot of stoner optimism. We thought that Bill (“I didn’t inhale”) Clinton would legalize marijuana in 1996. We were wrong by about 20 years, of course. One of the biggest challenges with cannabis legalization and other progressive issues is that the battles are never actually won. You see this also this with civil rights issues and voting disenfranchisement. Regressive people are always trying to take away the rights we fought so hard to gain. But there are many bright spots today. Welcome to 2020, where cannabis is legal medically or recreationally in 33 states. The cannabis conversation is alive, and as stigma disappears, I also get to take part in a lot of innovation. Being a cannabis trivia host on the app “Daily Bonfire” is a great example. It’s the first mobile gaming app for cannabis advocates and was named by Merry Jane as one of the 5 hottest brands in 2020 to dominate cannabis culture.

WB: Btw, you have incredible personal style. Do you have a name for it?

NB: It’s funny you mention my style. As the resident “weed expert” on Netflix’s Cooking on High, audiences likened it to “Batman super villain;” “Daily Bonfire” players, on the other hand, interpret it as “sexy professor.” It’s mostly influenced by the African dandy movement (Les Sapeurs de le Congo) and a liberal interpretation of the Italian Sprezzatura style. 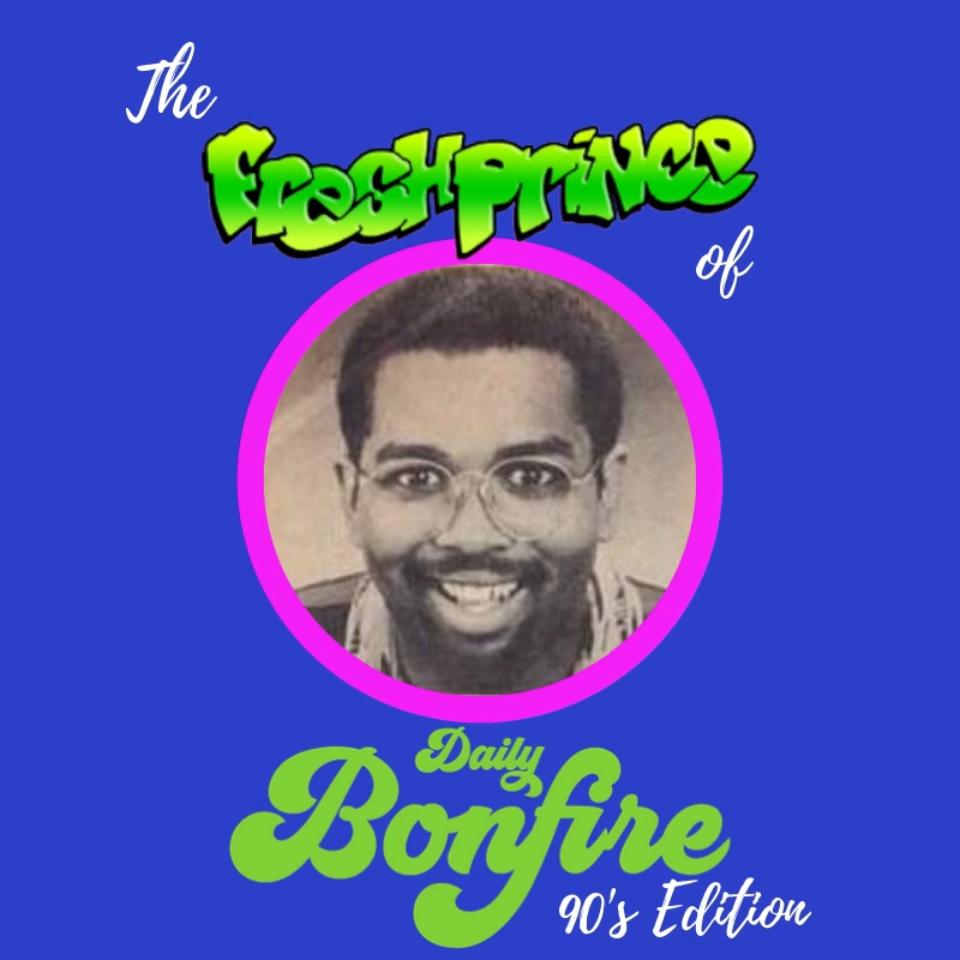 But who cares how I dress? Let’s talk money. Cannabis was an $8 billion dollar industry in California last year. Canada is exporting medical cannabis to Germany, and many other countries (South Africa and Malta are the first two that come to mind, but there are more) are looking to get into the international cannabis import/export market. CBD sales are through the roof. One would think that business is booming. And it is. Yet many giant cannabis companies (looking at you MedMen and Aurora) are having cash flow problems and the vaporizer industry is reeling because shoddy products found their way to the marketplace. The cannabis industry is growing and there is money on the table, but what is the best way to go about it? Let’s talk.

WB: Tell me about your work? How do you combat stigmas? Do you ever travel to the East Coast? It’s pretty bad here.

NB: I think it was Alice Walker who said: “Activism is the rent we pay to live on this planet.” That’s how I feel. For me, the best way to fight stigma is to be a good person and get on with your life. Haters are gonna hate.

The cannabis plant has been on the receiving end of millions of dollars of bad propaganda aimed at enforcing the unenforceable. Some people will never embrace legalization, and that’s OK. They don’t need to embrace it, but they just have to accept it.

Back in the ’90s I definitely faced some challenges from comedy clubs and festivals because I was seen as a “stoner comic.” Ironically, most comics are stoners, I was on the receiving end as I was open and honest about not just using cannabis, but enjoying it and being a weed activist.

These days, cannabis use is more acceptable and mainstream, so some of the same folks who used to deny me work are now offering me gigs. And the cannabis culture these days is full of festivals and parties and business conferences — and even trivia apps like “Daily Bonfire” — that need a host or emcee, so it’s not too hard to find work.

Common sense will tell you that throwing people in jail for a victimless crime will never solve the problem. Cannabis users aren’t criminals: cannabis has been unfairly criminalized. There is nothing “wrong” with smoking weed —or growing weed, or selling weed, or enjoying a little hash. You get the gist. Especially since there are literally thousands of studies that show cannabis to be beneficial not just medicinally, but environmentally as well. I know it sounds a little bit like hippiefied proselytizing, but the hemp plant can be a boon to this planet and a way to alleviate the effects of man-made climate change.

WB: What was the last really amazing thing that you smoked at the Emerald Cup? Did you dab? Any tasting notes?

NB: I have had the luxury of judging the Emerald Cup for the last five years and enjoy some of the world’s best craft cannabis. One standout includes POG from Greenshock Farms in Mendocino. I prefer a flavorful weed that tastes like it was grown with love and good intentions. I hardly ever dab at festivals, because dabs make me very quiet and mildly telepathic, and most festivals hire me to be witty and verbose. But I do enjoy the occasional dab, as a treat.

WB: Do you cook? Who taught you, if you do cook? Is there any food that brings a tear to your eye when you eat or drink it? Why? What’s your favorite restaurant? Where?

NB:My mom’s cooking will always be my favorite. Her palate is incredible. Back when I was on the road a lot, coming back home to visit my mom and get a home-cooked meal would definitely make me a little misty. As a Gen Xer, I have a variety of useful latchkey kid skills, meaning I can always whip up an impressive meal using found ingredients. Every day is like an episode of “Chopped.”

I cook a lot. I deep-fried a turkey for Kwanzaa and paired it with a cranberry chipotle sauce, with bacon and maple syrup roasted Brussels sprouts. 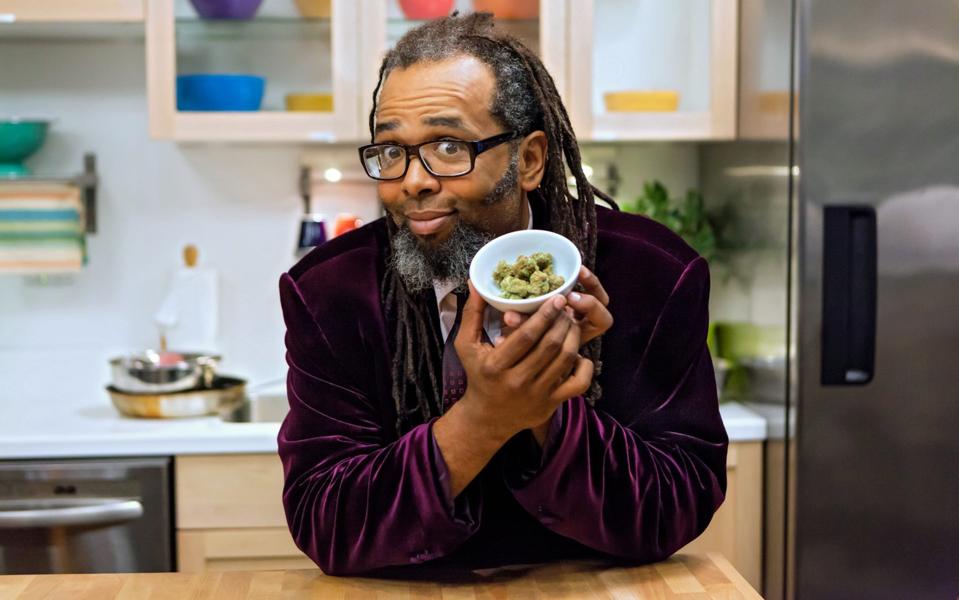 I don’t have a singular favorite restaurant, but I probably have a favorite spot in each city I’ve visited. The folks at Pine State Biscuits in Portland probably think I live in Oregon, because they see me so often. There’s also a place in Barcelona that makes an amazing patatas bravas. Can’t wait to go back.

NB: Life? Weed? Ethical hedonism? Mindfulness? A really good joke? Fair play? Progress? There is so much to be passionate about. Life is absurd. The fact that we’re here is absurd. And it’s often short, so we might as well have adventures and create magic while we can.

And my motto: I strongly believe that hippies are mostly always right, and that the Campfire Rule is slightly more important than the Prime Directive.

The Rocket League Championship Series Season 9 World Finals Will Be In Dallas, Texas

The Boxing On TV And Live Stream Schedule For February 2020

The Coronavirus Will Cost U.S. Sports Leagues At...