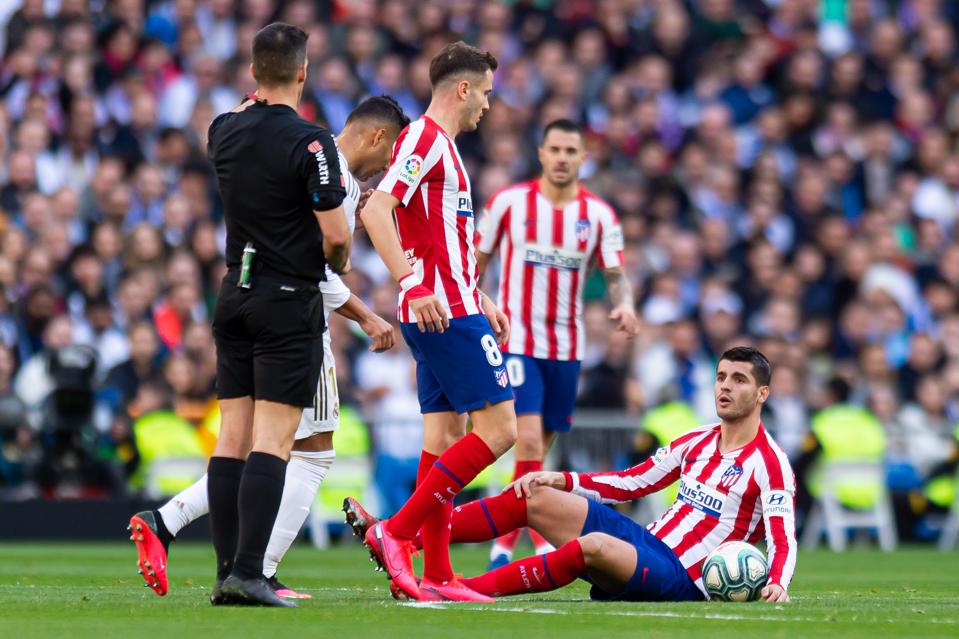 Atletico Madrid’s Alvaro Morata wasn’t given a penalty despite being man-handled by Real Madrid’s … [+] Casemiro in the penalty box. (Photo by TF-Images/Getty Images)

It’s a question that’s been asked many times in the past, and after Saturday afternoon’s Madrid derby, it’s reared its head again.

The call for impartiality has been sounded again after Atletico Madrid were denied what appeared to be a perfectly legitimate penalty in the first half of the Madrid derby.

Alvaro Morata was clean through on goal, and though Casemiro in his previous action had nudged the ball away, his right arm, wrapped around the striker, clearly impeded him from trying to get a shot away.

Even VAR appeared unmoved by the appeals from the Rojiblancos.

The block made by the Brazilian can be clearly seen to the left above, along with other instances where the midfielder has somehow benefitted from what might be loosely termed ‘favourable’ refereeing.

Interestingly, former official, Juan Andujar Oliver, who now writes for Spanish daily, MARCA, a publication that aligns itself with Los Blancos, said that the Morata/Casemiro clash should’ve resulted in a spot-kick.

“After watching replays, there appears to be contact with the arm of Casemiro on the Atletico striker,” he noted live on Radio MARCA.

“[It’s] a moment that could well have been given as a penalty by the referee.”

He tweeted; “”The robbery of a penalty by Casemiro on Morata was so great that it will be used in the next season of La Casa de Papel (Money Heist). I’m flipping out that VAR said nothing.”

The accusations, whilst damaging to Real Madrid and something that has greatly irked their president, Florentino Perez, are nothing new.

Back in 2017, Barcelona defender Gerard Pique complained of a pro-Real bias from the officials.

“The penalty to Neymar was very clear and the one with Gorka [Iraizoz] on me, too, but we already know how this works,” he said to Gol T after Barcelona lost to Athletic Club in the Copa del Rey.

“We already saw what happened yesterday with Sevilla-Madrid and in recent times. We want to play football and not roulette, which is what these decision are creating.”

His inference was clear and, prior to that game, his gesture towards La Liga president, Javier Tebas, in a game against Villarreal, made headlines across the sporting landscape.

The defender had complained about a penalty not being awarded and, pointing his finger at the VIP box, yelled at them before leaving the field.

Tebas acknowledged to media at the time that; “I agree with Pique that the level of the refereeing needs to improve.”

The introduction of VAR is supposed to have eradicate any on-pitch errors, and after the Morata incident, it seems clear cut that the video officials still aren’t doing their jobs correctly.

However, whether this amounts to favouring Real Madrid is a matter of conjecture and opinion.

Why You Should Swipe Left To Find The Perfect Password Partner

Warren Buffett And The Biggest Losers From The...

5 Steps To Turn Passion Into Profit

3 Elements Of A Great Culture That Are...

The Return Of Stephen Curry And Kevon Looney...