Breaking
What You And Your RTO Business Need To...
4 SEO Trends for Websites You Should Not...
3 Reasons Why Desk Booking Is Rising In...
8 Tips to Play & Win at Online...
How can software benefit facility management?
Do Professional Casino Players Pay Taxes for the...
Becoming a Trading Expert: What Is the Best...
Dos and Don’ts for B2B Organisations in 2022
Should your business be using Machine Vision?
Colour Masterbatch vs Raw Pigments – Which Is...
Keeping your business moving as you expand online
Top Four Celebrities Who’ve Invested In Cryptocurrency
Why is Cloud Computing Tipped to be the...
How to Raise Money for Non-profit Organizations in...
Choosing the right theme for your WordPress Business...
A Guide to Using Celebrities to Promote Your...
Home Business Do You Want New And Better Working Paradigms?
Business

The media focuses on the personalities and horserace politics, but voters know that elections are more than popularity contests. They determine what policies will be put in place, which profoundly impact all of us.

Since 2017, the rolling back of government regulation and reduced tax burden has helped improve employment prospects for millions of Americans. Wages are rising, entrepreneurship is up, unemployment is dropping, and millions of jobs wait for people with the skills to fill them. Women have particularly benefited from these trends: the number of women-owned businesses have soared, women’s unemployment is at historic lows, and women now account for a majority of the nation’s workers.

Yet more can and should be done to continue these positive trends and make it easier for women to find work situations that fit their particular circumstances. That’s particularly important: Women, particularly mothers, don’t want to be forced back into an era when they confronted a black-or-white choice of whether to work or stay home. A growing number of women want to create their own unique shade of grey by blending work and family life together on their own terms. We should embrace policies that help them to do so.

To start, policymakers should take a fresh look at the Fair Labor Standards Act, a Depression-era law that is simply out of date. Policymakers should make it easier for workers to customize their work schedules, and give them the option (like public sector, government workers already have) to receive paid time off in return for overtime work, rather than extra take-home pay.

Americans should reject attempts to curtail independent contractors, freelancers, or gig workers. California’s recently passed AB5, a law limiting who can be considered an independent contractor, is an attempt to force businesses to return to using solely traditional full-time employees. Yet this backfires on everyone who prefers flexibility over a traditional job. An ophthalmologist in California described the impact that AB5 is having on her and her family:

I have been an independent contractor optometrist for 18 years. I currently work part-time so that I can raise my two boys. Being an IC optometrist has given me the flexibility and the income to have the best of both worlds, a fulfilling career and be present for my children. The AB5 bill has cut my income by 30 percent overnight! I will have to work more to stay afloat. This is detrimental to my family.

She’s not alone. Dozens of employers have announced that they will be limiting their use of California’s independent contractors because of these new rules. Americans should be warned that other states are seeking to follow California’s model and Democrats have introduced legislation that would impose restrictions similar to AB5 on a federal level. This would be a tremendous step backward in terms of workplace flexibility, particularly harming working parents, working students, and everyone who depends on side hustles to make ends meet or to get ahead.

Rather than trying to force workers back into the mold of 9 to 5 work shifts, with a government proscribed set of benefits and limitations, policymakers should look for ways to give workers more options and opportunities to help themselves. They can help people who currently lack sufficient paid leave benefits by giving them the option to take a small share of the benefits they’ve accrued from Social Security when they need to take time off from work, in exchange for a small delay in eligibility for retirement benefits. Expanding options for workers to put money away tax-free for critical needs, like paid time off, would also increase financial security and preserve worker flexibility. That’s a far better approach than creating another one-size-fits-all government entitlement program, which would mean people have less money in every paycheck, jeopardize existing employer-provided benefits, and discourage employers from customizing benefits to employees’ needs.

These are just a few of the more than twenty policy proposals outlined in Independent Women’s Forum’s newly released Working for Women’s Agenda, all of which seek to give people more and better options by returning resources and decision-making power from government to the people themselves. 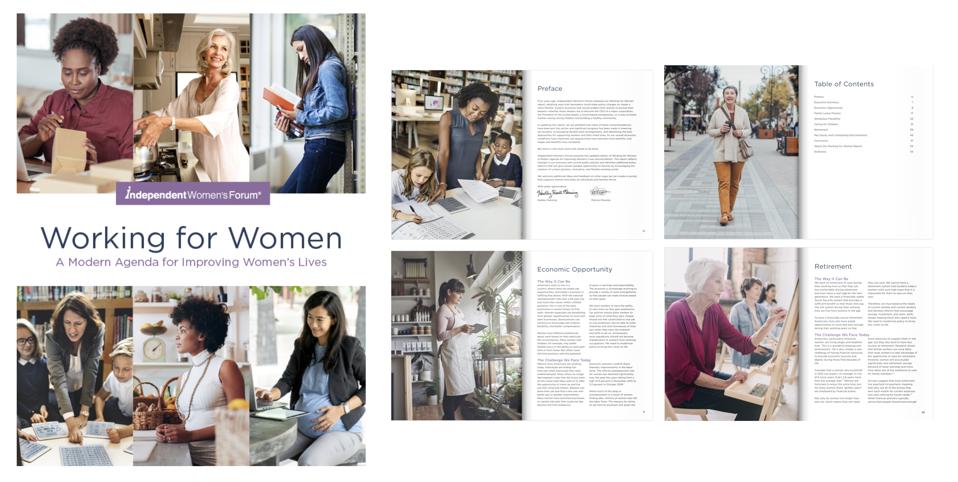 The second edition of “Working for Women” provides an updated picture of our economy and progress on … [+] many workplace issues. It also advances solutions to foster a stronger economic environment that gives women more choice, opportunities, and resources to build the careers and lives that they want for themselves and their families today and in the future.

Women are advancing in terms of economic progress, not just in terms of climbing the corporate ladder and earning more, but in their ability to pursue their own visions of happiness. But this progress shouldn’t be taken for granted.

Will our economy continue to offer people new employment paradigms? That’s a question that will be answered in part by upcoming policy battles and political debates. It won’t get the same media attention as the latest trading of political insults and innuendos, but it will matter profoundly in determining what options we have—and don’t have—for work in the coming years.