Breaking
What You And Your RTO Business Need To...
4 SEO Trends for Websites You Should Not...
3 Reasons Why Desk Booking Is Rising In...
8 Tips to Play & Win at Online...
How can software benefit facility management?
Do Professional Casino Players Pay Taxes for the...
Becoming a Trading Expert: What Is the Best...
Dos and Don’ts for B2B Organisations in 2022
Should your business be using Machine Vision?
Colour Masterbatch vs Raw Pigments – Which Is...
Keeping your business moving as you expand online
Top Four Celebrities Who’ve Invested In Cryptocurrency
Why is Cloud Computing Tipped to be the...
How to Raise Money for Non-profit Organizations in...
Choosing the right theme for your WordPress Business...
A Guide to Using Celebrities to Promote Your...
Home General Documentary Calls Out Stereotypes, Issues Urgent Call-To-Action For A Black Male Physician Pipeline
General 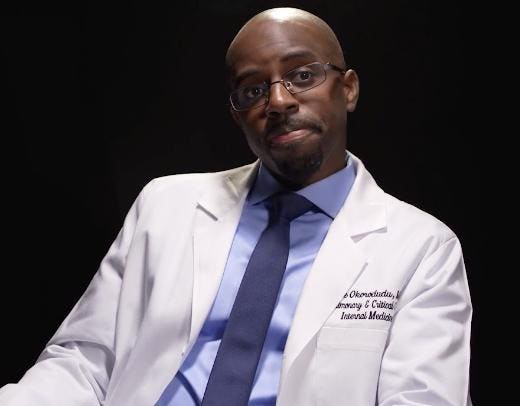 “You can’t be what you can’t see,” says Dr. Dale Okorodudu, founder of Black Men in White Coats (BMWC), whose mission is to increase the number of Black men in the field of medicine. “To become a Black man in a white coat, you must first see yourself capable of becoming one.”

That message is powerfully conveyed in the forthcoming documentary “Black Men In White Coats” scheduled for release on February 8. In the documentary, Black doctors share their respective journeys through medical school, articulate the challenges they faced and emphasize the urgency in building a pipeline of Black physicians to meet the needs of Black communities everywhere.

Okorodudu conceived the idea for a documentary in 2019, and a Kickstarter campaign quickly raised money to begin the process. Intended to educate and inspire, much of the content is captured in a local Dallas barbershop where Okorodudu, his physician brother Daniel Okorodudu and pre-med student Travon Manning discussed and debated the cause, effect and, more importantly, the next steps.

“In the Black community, conversations tend to happen at Church and in the barbershop, so we knew we’d get the real stuff simply by sitting in the chair,” Okorodudu said.

Through much of the barbershop dialog, Okorodudu pressed the issue for why so few Black men became doctors. He referred to data showing the number of Black males entering medical school hasn’t increased in 40 years. In 1978, 3.1 percent of medical school enrollment comprised of Black men. In 2019, only 2.9 percent were Black men.

“Whose fault is it? Whose door do I need to go knocking on?” Okorodudu demanded.

The answer is layered and complex. But the message is clear. Something needs to be done.

“You can’t say it’s the Black community. But you can’t say it’s all racism because that’s disempowering,” said Dr. Myiesha D. Taylor, a board-certified emergency medicine physician specialist and a fellow of the American College of Emergency Physicians.

“We need two conversations. One is for Black parents and students empowerment and accountability. But also need to work simultaneously to expose and change the systems of our country to allow for opportunity.”

Taylor, who founded Artemis Medical Society, bringing together women physicians of color to change the face of medicine, is one of many Black physicians inspiring a call to action.

Anesthesiologist and U.S. Surgeon General Jerome Adams tells a powerful story as well. “As a Black man who is also a physician and Surgeon General, I’ve been thought of as the help, a janitor, anyone but the doctor,” he shares in the documentary. Adams believes stereotypes of Black men are, in part, preceded by the soft bigotry of low expectations for Black boys in the public education system.

His thoughts were echoed by Dr. Pierre Johnson, who emphasized, “The stereotypical narrative isn’t just the masses, it’s us.” Even as physicians, negative perceptions prevail.

A 2015 AAMC report confirmed that bias and stereotyping were the most commonly noted challenge for Black men in the U.S. “Interviewees noted that public perceptions and images of Black men may adversely influence their educational and career progress and outcomes. They frequently cited the problematic claim that is often perpetuated in the media that there are more Black males in prison than in college.”

“The patient’s perception is that the doctor who looks like him can prescribe a better plan of care, and he’s going to be more compliant,” said John Boaz, healthcare executive and executive producer for the BMWC documentary. “Non-compliance is one of the key drivers to healthcare costs in America.”

A Stanford Health Study showed that when a Black doctor treats black men, they take more proactive health measures, such as flu shots and diabetes and cholesterol screenings. The randomized clinical trial among 1,300 Black men showed that 29 percent more were likely to talk with Black doctors about other health problems and seeking more invasive screenings that likely required more trust in the person providing the service.

The pipeline of Black physicians are also noted in demographics. While African-Americans comprise about thirteen percent of the population, only 4 percent of physicians and less than 6 percent of medical school graduates are Black, according to the study. An Association of American Medical Colleges (AAMC) Health Care Utilization Equity analysis found the U.S. needs an additional 95,900 doctors immediately if health care utilization patterns were equalized across race, insurance coverage, and geographic location.

Black men have the lowest life expectancy in the country. To build a health care infrastructure that supports medical needs and reduces healthcare disparities, a pipeline of Black male physicians is urgently needed. Success requires, in part, exposing, mentoring and advocating on behalf of Black male youth. It also means medical schools should be considering more than just test scores.

“Medical schools are not at fault,” said Okorodudu, “but they are responsible for fixing the diversity. Are they stewards for providing doctors for the country’s patients, or are they about dollars through the door and rankings?”

“What excites me the most is that it really sparks conversation and activates people to action,” Okorodudu said. “Our virtual screening hosts, including most of the top ten medical schools, will facilitate in-depth discussions about the film, and we expect that some real action plans will arise.”

Clearly, Okorodudu is driven to be the change he wants to see. His commitment to increasing the number of Black men in medicine by exposure, inspiration, and mentoring can be seen in the upcoming documentary and the BMWC community and Youth Summits for elementary through high school students and their parents.

Launched in 2019, the summit introduced information sessions and different medical specialties to more than 1,800 attendees. The program has since been redesigned for easy replication nationwide. This year, with COVID-19 redefining every aspect of life, work and community, the program became virtual.

To arrange access for institutional screenings or to watch independently, visit www.BMWCmovie.com.

Students Can Get Hulu For Just $1.99 Per Month. Here’s How To Get A Hulu Student Discount Plan