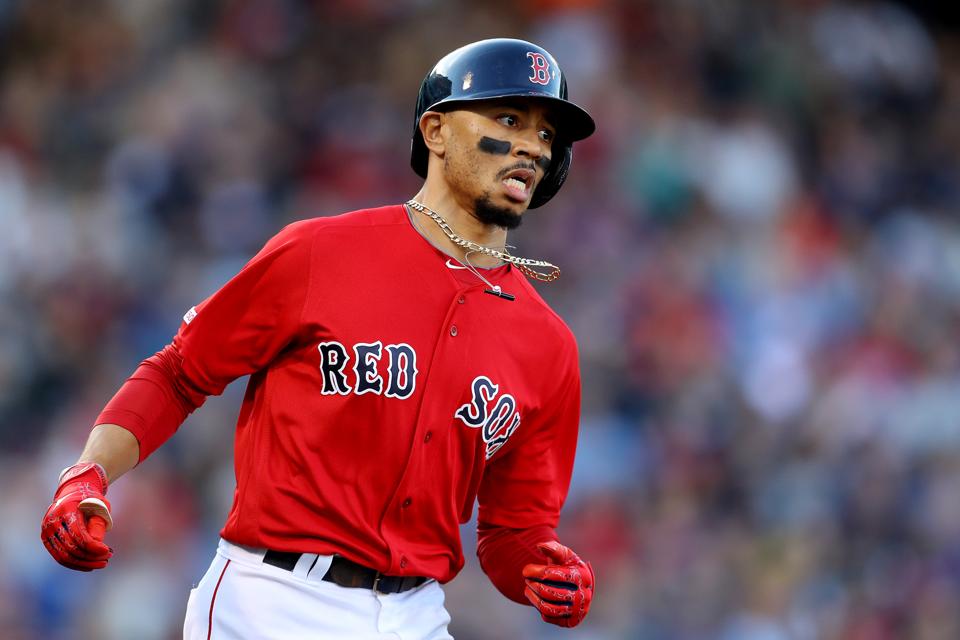 Mooke Betts is headed to the Los Angeles Dodgers. But is the former AL MVP really the answer to the … [+] Dodgers’ postseason woes? (Photo by Maddie Meyer/Getty Images)

As the nation relaxed on Tuesday evening, the big national news went down. No, it was not the State of the Union or Nancy Pelosi tearing up a copy of President Trump’s address, rather it was the blockbuster trade between the Boston Red Sox and Los Angeles Dodgers that should see 2018 AL MVP Mookie Betts and former AL Cy Young winner David Price headed to La-La Land should physicals pass. Yes, the deal was vastly more complicated. The Dodgers are set to send Alex Verdugo to Boston in the deal. They also are sending Kenta Maeda to the Twins for RHP Brusdar Graterol, and whether it was a matter of timing or a cascading effect, Joc Pederson heading from the Dodgers to the Angels in exchange for infielder Luis Rengifo. Nevertheless, make no mistake it is the centerpiece in Betts and Price (and ultimately the Red Sox doing it as a salary dump) that this was about.

For the Dodgers, who have been so precariously close to winning their first World Series title since 1988, the question is whether this really makes them that much better? The team went 106-56 in the regular season last year, so this isn’t about that. What it is about is the postseason, and in that, it’s not clear the Dodgers are any better today on paper or in the field than they were yesterday.

If this is the last gasp of the Dodgers’ window with this core group, you’re not solving the holes with the rotation and bullpen that have prevented them from getting over the hump. David Price, who has been lights out at times, but simply too inconsistent to put on the same list as the likes of Gerritt Cole or Stephen Strasburg as sure-fire starting pitching stops in the postseason, isn’t the answer. And is adding Betts simply overkill? By WAR (52.8), only the Astros at 54.7 were collectively better as a team. Offense just doesn’t seem to be the problem.

And while the Dodgers said they’re going to make a play for Betts to ink a long-term deal, that’s no given since he’s said he wants to push the envelope through free agency at the end of the season. To add, Price will be one season older. Entering his 13th season, decline is either here, or at the doorstep.

So, the pieces the Dodgers get from the Red Sox are nice. It sure makes for great baseball discussion, and certainly, cash registers are buzzing with ticket sales in the Dodgers front office. But if Andrew Friedman doesn’t work a trade for high-caliber pitching somewhere along the line, fans of the Dodgers may, yet again, see the team win over 100 games in the regular season, only to be bounced in the playoffs. The Dodgers simply have too many open holes to say Betts and Price solve that problem.

Here’s How Raising Cane’s Plans To Keep Its...

6 Signs That Your Team’s Communication Isn’t As...

How A Brush With Death Made This Entrepreneur...