DOD’s Second Covid-19 Wave May Be A Tsunami 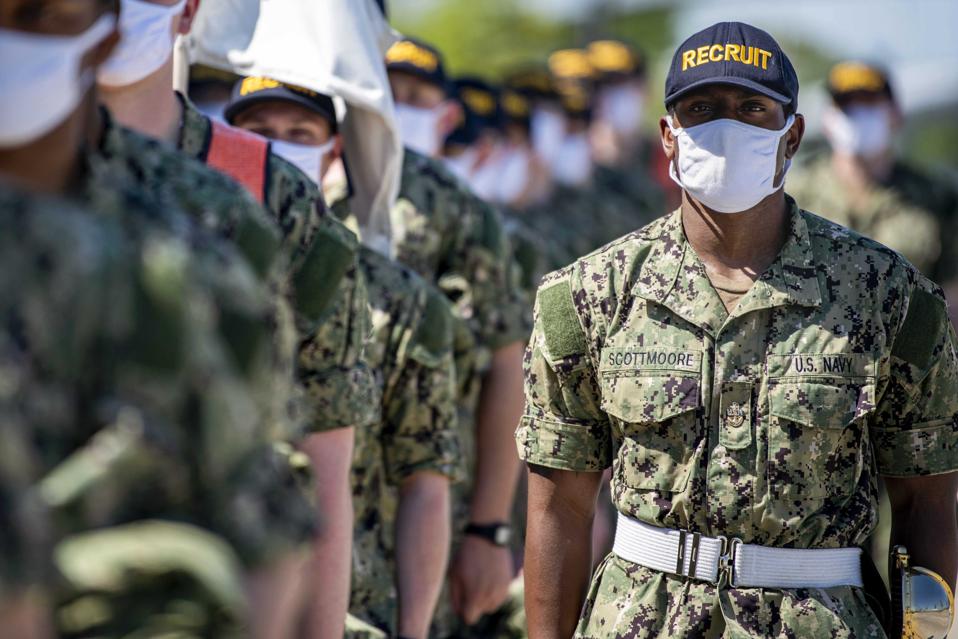 The military has taken precautions against the spread of infection, but new cases are rising … [+] steeply.

DOD is experiencing a second wave of infection that has already surpassed the peak of the first wave. For many weeks DOD’s effort to cope with the pandemic had been on a positive track. After new cases peaked in mid-April, DOD’s aggressive response seemed to be working. The level of new cases dropped steadily. However, at the end of May, DOD started opening up, personnel and troop movements resumed, and the number of new cases has skyrocketed. Although DOD’s level of infection is still relatively low, the number of new cases needs to level off soon before the infection gets out of control. 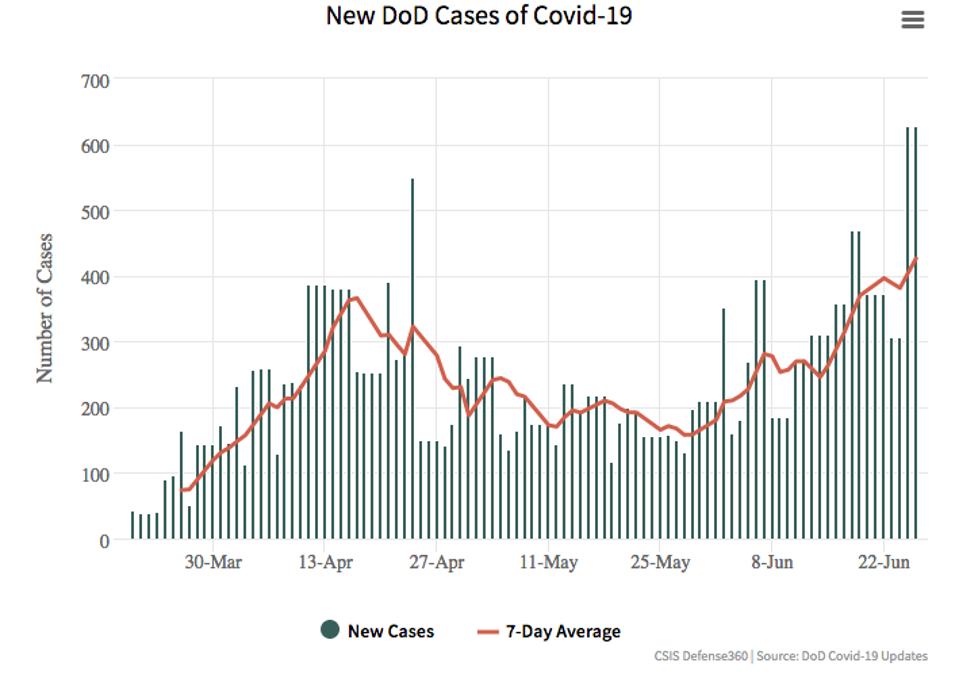 Center for Strategic and International Studies

The chart above comes from a weekly update on the pandemic and the military produced by the Center for Strategic and International Studies. It illustrates how infections in DOD started at a low-level in mid-March and rose to a peak in mid-April of about 370 new cases per day. DOD took action to control the spread of disease: remote and shift work, cessation of personnel moves, cancellation or limitation of large exercises, a pause in recruit training, distribution of protective equipment, quarantining of servicemembers before deployment, and developing a four-tiered testing plan that prioritized strategic and deployed forces.

These actions had an effect. The number of new cases declined steadily to late May, bottoming out at around 160 new cases a day, half the peak level. Trends did not indicate that case count would go to zero, but it did not have to. DOD could sustain that level indefinitely.

However, DOD, like the rest of the country, started opening up around Memorial Day. Recruit training recommenced, though with a reduced flow to allow social distancing. Personnel movement and transfers resumed to allow families to move to the next duty station and servicemembers to attend schools and training. Ground deployments overseas recommenced. Training exercises resumed, although with various Covid-19 precautions.

At the beginning of June, the number of new cases started to increase rapidly. The rise paused in mid-month, giving hope that DOD had reached a new equilibrium. Although that level was higher than the previous equilibrium, it reflected a higher level of activity and was sustainable. But then the number of new cases started rising again, surpassing the April peak by mid-June. More concerning, the trend does not appear to be flattening.

The good news is that DOD’s experience with the infection has so far been mild. The cumulative number of cases among its workforce of active duty military, government civilians, and contractors is 23,900 out of a total workforce of about 3 million. The total number of deaths is 37. While each death is a tragedy, the low number is encouraging. The death rate is only .15 percent.

The military is lucky that it has a young workforce, which seems to be less susceptible to the worst effects of the infection. (This is different from the 1918–1919 influenza pandemic, which was especially deadly to young people.) This lower vulnerability was illustrated by the experience of the USS Roosevelt. The infection got aboard the ship in early March and then started to spread among the crew. Ships are particularly susceptible to infection because of the tight quarters. Roosevelt had to tie up at Guam and offload the crew to properly fight the infection. Ultimately around 1,200 sailors tested positive, but only ten required hospitalization and only one died. A CDC study of the outbreak found that, among its sample, 20% of the cases were asymptomatic, and most cases were mild.

Eventually, the infection will affect enough people that there will be pressure to pause deployments, recruit training, unit training, and personnel movement. Yet, the military leadership has been emphatic that the services cannot go into full lockdown, arguing that they have a national security mission that won’t go away. They need to induct new personnel to replace those whose time in the service is ending, train existing personnel so they are ready to execute their wartime missions, move personnel to new assignments so they can progress in their careers, and deploy forces overseas to respond to crises, sustain ongoing conflicts, and maintain solidarity with our allies.

Clearly, though, DOD needs to do something because the trend will not stop on its own. The first step will be clamping down on unnecessary activities and restricting some activities outside of the work environment. It doesn’t do any good to socially distance on base and provide personal protective equipment if servicemembers go to a crowded bar on the weekend. The Navy, for example, recently reissued strict guidance about personal behavior, directing that sailors “minimize unnecessary in-person use of [recreational and commercial] services and activities.” However, this will probably not be enough.

DOD needs to investigate what is driving the rise in new cases. For example, new cases appear to be rising in the services unequally. Whereas the Navy represented the largest share of cases during the mid-April peak, new cases in the Army have increased steadily, overtaking the Navy beginning in June. The difference might be explained by the Army’s resumption of training or by the Navy’s aggressive actions onboard ships, but the reason should drive a DOD-wide response that preserves key elements of reopening while flattening the curve of new cases.

Quadruple Your Email Open Rates With These 4...

How To See The Hidden Side Of The...

WWE May Be Planning A Surprising In-Ring Return...

The State Of Cloud Business Intelligence, 2020

What Every Business Can Learn From One Company’s...