Breaking
France Off Travel Corridors And FCO Exempt List
Ask Ethan: Why Are The Moon And Sun...
When To See The Moon And The Planets...
IRS-CI Involved In Largest-Ever Seizure Of Terrorist Organizations’...
The Check Really Is In The Mail. After...
Epic Games Vs Apple: Why You Won’t Be...
Senator Kamala Harris Proposed A Bold Tax Credit...
Deal Terms To Reduce The Risk When Buying...
Multiple Sclerosis Drug Shows Promise For HIV Prevention...
The Neglected Piece Of Retirement Planning
It’s No Longer A Viable Option For Capitalism...
Virtual Credit Cards: An Extra Layer Of Protection...
Lessons From The Rainforest: Human Health Leads To...
Four Easy Ways To Bolster Your Company’s Reputation
It’s All About Claims: New Claims Come In...
Does Covid-19 Change How We Look At Digital...
Home Technology Dolby Cinema Defeats IMAX In Star Wars: Rise of Skywalker Battle
Technology

A couple of months ago I analysed what the best format was for watching Star Wars: The Rise of Skywalker and (#spoilers) predicated that Dolby Cinema would be my preferred format of choice. As a big Star Wars fan, I attended a midnight showing with friends as part of a triple bill of the Disney sequels, and then went back the same evening to see it with the family. Yes, hardcore.

While you’re not here to read my thoughts on the film, I will say that loved it. Yes, it almost gets crushed under the weight of its fan service, but frankly, I don’t think the last film in a nine-part saga that spans 42 years of film history is the place to start pushing boundaries. A certain Mr Johnson tried that with The Last Jedi – and look that where that got us. With division everywhere around us in the world: be it politics, business or ideology, a crowd-pleasing saga-ending movie is just what we all need. 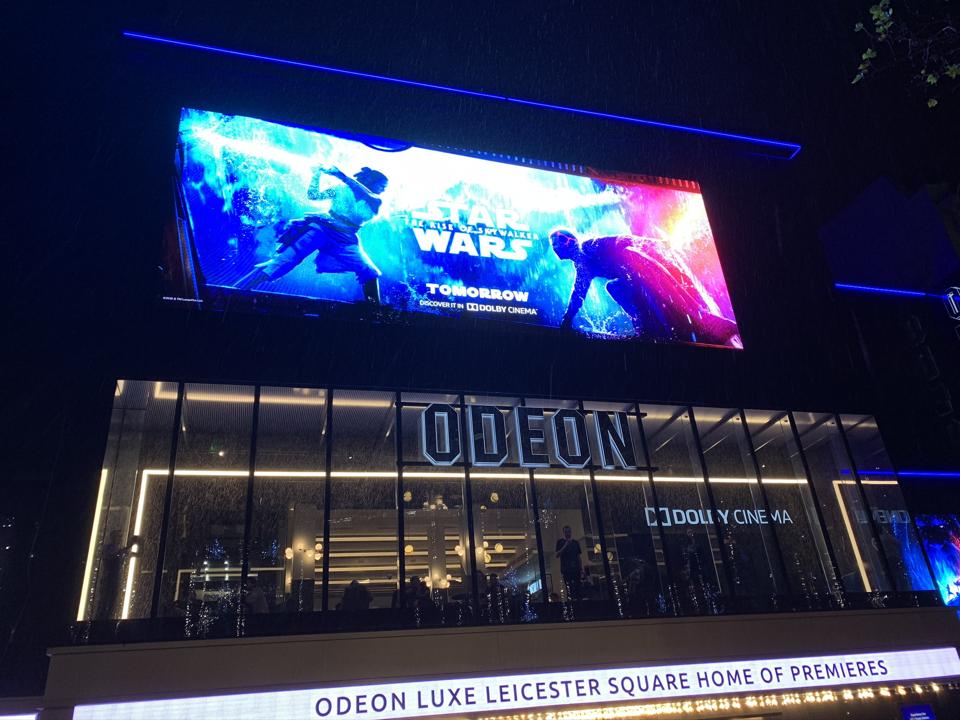 Opening morning for Star Wars: The Rise of Skywalker at the Odeon Leicester Square

That’s my two cents on the film itself. My first viewing was in 2D Dolby Cinema as the Odeon Luxe Leicester Square in the seats in the lower tier towards the back (row G), while the second was also in Leicester Square but in 3D at the Cineworld IMAX (seats much closer to the screen). Aside from the BFI IMAX with its huge 1:43 aspect ratio screen for 70mm showings, these two screens are arguably the best for digital projection in London, the Odeon thanks to its Dolby Cinema screen, and the Cineworld due to its being the largest laser-based IMAX screen in the capital. (Note to self: must check out the Vue in Leicester Square).

Going to both screens in one day gave me the opportunity to closely compare the experiences. Dolby claims that its system offers the very best image quality, with the deepest blacks and most vibrant colours – essentially HDR in the cinema. IMAX has on its side sheer scale – the screens are always larger, especially in the case of the Odeon Leicester Square, which doesn’t have the largest screen compared to its auditorium, unlike the Dolby Cinema in Leeds, which has a better seat to screen ratio. Another difference was that the Dolby showing was in 2D and the IMAX in 3D.

So, which was better? In terms of picture quality, it was hands down…. Dolby Cinema. The black levels and excellent contrast are tailor-made for the Star Wars experience – and the Dolby Atmos from the 800 speakers in Leicester Square was simply huge!

The IMAX screen had in its favour scale and thanks to the 3D, depth – and being able to look deep into certain the shots was quite wonderful. However, overall the picture had less colour richness and a distracting (at least to me) amount of noise. That almost certainly comes from the fact as no IMAX cameras were used to film Rise of Skywalker the picture needed is upscaled to fit the IMAX screen using the IMAX DMR process. Also, as the film is 2.39:1 aspect ratio its extra height is not being used, which reduces the fact that at 26.5m by 15.6m the Leicester Square IMAX has the benefit of being twice the height of the Dolby screen. That said, you really want to be close as possible the screen at the Odeon Leicester Square, otherwise, the impact of the image will be greatly reduced. Additionally, I’ve head IMAX soundtracks with immense wallop but compared to the Atmos system across the square, the impact of the opening Star Wars salvo was rather disappointing.

The Odeon didn’t just win for the picture and sound quality though. As I was watching a triple bill, I was very grateful to the Luxe recliner seats, which are comfortable, have acres of legroom and a rotating table for the much-needed snacks. Unfortunately, the IMAX Leicester Square doesn’t fare so well here in comparison. The seats are fine in terms of padding, but they don’t recline. In fact, you’re very close to the person on either side and legroom is noticeable by its absence. What’s more the foyer at the Cineworld is relatively small and om this opening night, it was unpleasantly crowded. All in all, my local IMAX now appeals to me more than the London one does.

If you haven’t yet seen Rise of Skywalker, then if it’s a choice between a standard screen and IMAX then would still pick the latter, but if you’re able to get to a Dolby screen, then that’s the one I’d choose.

How Brian Williams Made 11 P.M. The Hottest Hour In Cable News