Breaking
‘Remnant: From The Ashes’ Is Cheaper Than Ever...
Top Stocks To Buy Today As Markets Rise...
How To Sell Artisanal Ice Cream In The...
Making America’s Trumps Pay Their Fair Share
Fortnite Season 4, Week 9 Challenges Revealed And...
Yesterday You Were Just A Business; Today You...
Should Your Company Help Get Out The Vote?...
Hyperautomation And What It Means For Your Business
The Role Of The Indie Agency In Our...
Parker-Hannifin Crosses Pre-Covid Peak But Investors Set To...
6 Reasons Your Cold Messaging Efforts Fail And...
4 Analytics Categories To Track To Improve Your...
Predictions 2021: Cloud Computing Powers Pandemic Recovery
This Is Why You Need A Strategy In...
Economic Research Exposes Significant Flaws In DOL H-1B...
How Breast Cancer Turned This Entrepreneur Into A...
Home Business Donald Cerrone Is The Safest Opponent, But What If Conor McGregor Loses At UFC 246?
Business

Donald Cerrone Is The Safest Opponent, But What If Conor McGregor Loses At UFC 246? 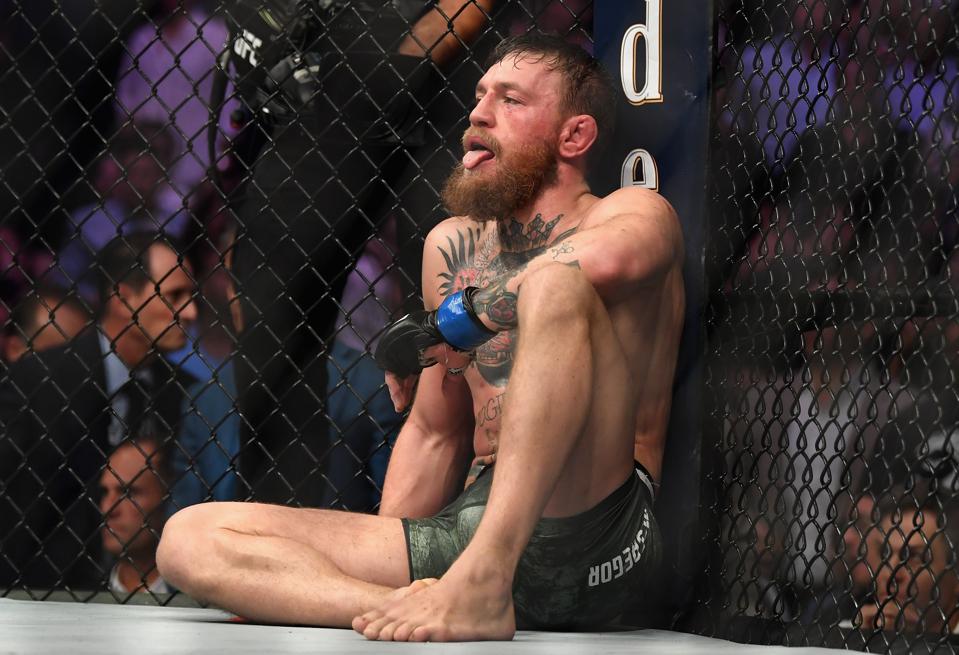 LAS VEGAS, NV – OCTOBER 06: Conor McGregor of Ireland is sits on the mat in the octagon after being … [+] defeated by Khabib Nurmagomedov of Russia by submission in their UFC lightweight championship bout during the UFC 229 event inside T-Mobile Arena on October 6, 2018 in Las Vegas, Nevada. (Photo by Harry How/Getty Images)

The biggest star in MMA history is making his return to the UFC’s Octagon on January 18 in the main event of UFC 246 in Las Vegas. Conor McGregor will face Donald “Cowboy” Cerrone in a 170-pound bout that will be the former’s first since losing to Khabib Nurmagomedov in October 2018.

McGregor is currently a -210 favorite to defeat Cerrone, per BetOnline. However, this match is taking place above his normal weight class, and he’ll be in with a skilled veteran who has had plenty of moments inside the Octagon.

Still, it’s no secret Cerrone isn’t quite what he used to be and has seemingly been vulnerable to body shots for most of his career. If the UFC and McGregor’s camp were deciding between Cerrone and Justin Gaethje for this spot, Cowboy was the safest choice.

Still, what happens if Cerrone pulls off the upset?

The 36-year-old Cerrone is a future UFC Hall-of-Famer. His 18 post-event bonuses are the most in UFC history. Cerrone is a skilled striker and one of the top Brazilian Jiu-Jitsu practitioners in his weight region–though he likes to brawl.

Cerrone is also coming off two consecutive losses to Gaethje and Tony Ferguson, and he was stopped in both bouts. The Denver, Colorado native doesn’t have the same global notoriety as McGregor, but he is a fan favorite. Cerrone’s strong following and seemingly declining skillset makes him a perfect return opponent 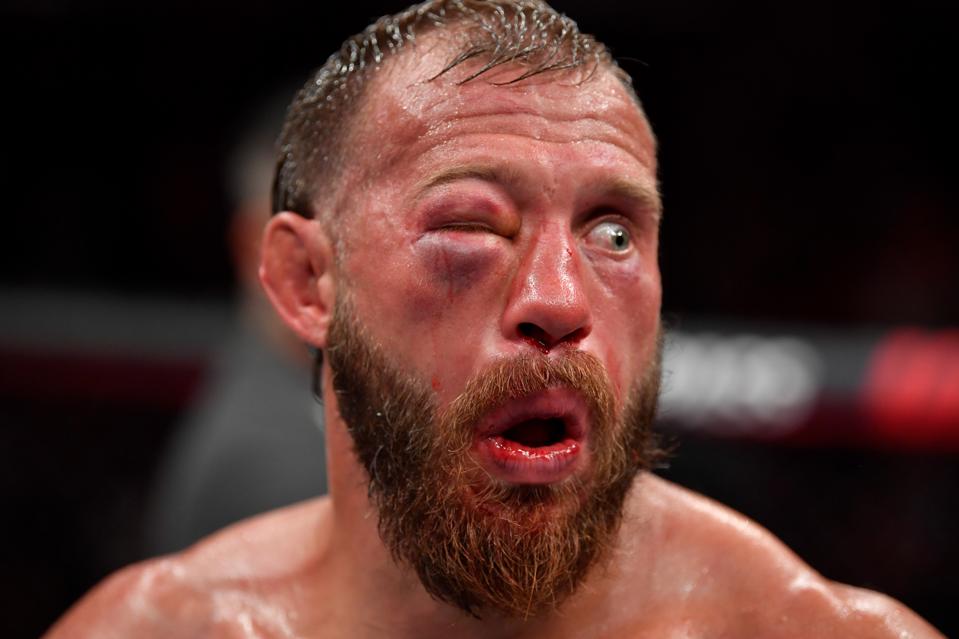 CHICAGO, IL – JUNE 08: Donald Cerrone reacts after the conclusion of his lightweight bout against … [+] Tony Ferguson during the UFC 238 event at the United Center on June 8, 2019 in Chicago, Illinois. (Photo by Jeff Bottari/Zuffa LLC/Zuffa LLC via Getty Images)

On paper, this looks like a fight McGregor could win by stoppage, but Cerrone is smart and he knows that a win over the Irishman would be the perfect way to solidify his status as a UFC legend. If McGregor has Octagon rust or a decreased level of commitment to the sport, he will be vulnerable against anyone in the UFC–but especially an opponent like Cerrone.

If McGregor falls to Cerrone he will have lost two in a row for the first time in his career. He’ll have lost to an aging veteran coming off a two-fight losing streak, and perhaps most importantly, McGregor would seemingly be further away from a rematch with Nurmagomedov who is said to be set to face Tony Ferguson in April. 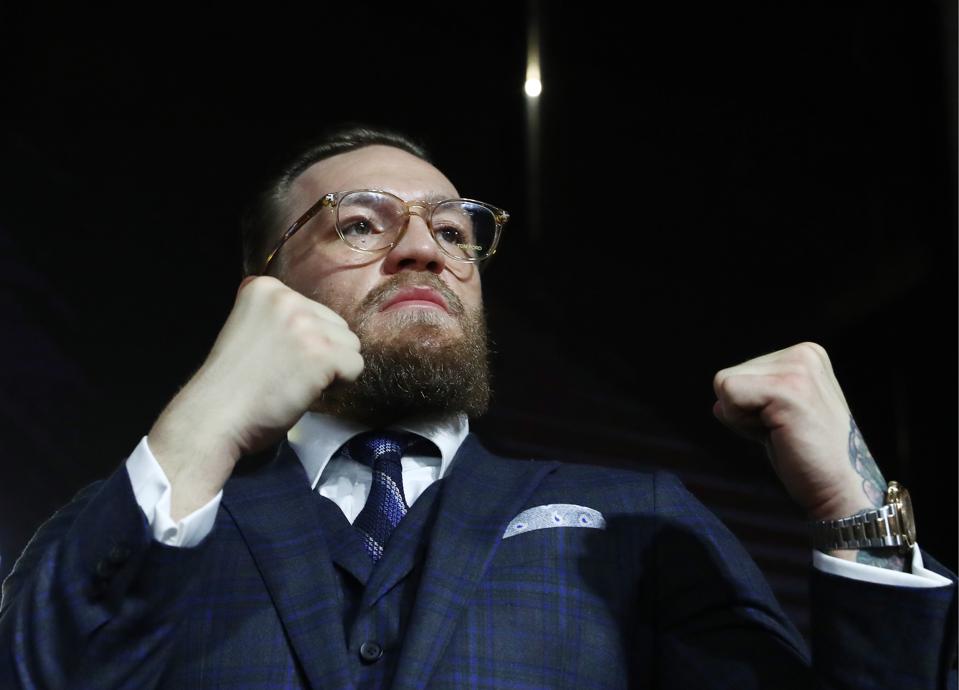 McGregor is the rare superstar in combat sports whose presence commands a main event spot on every card he competes. However, if he is no longer one of the top fighters in his weight region, the UFC has a conundrum. Who does he fight next on a two-fight losing streak?

In case you’re wondering, Gaethje has repeatedly called for a bout with McGregor but it didn’t happen, which as I mentioned, is probably a wise business decision on the UFC’s part. Gaethje is everything McGregor should avoid at this point in his career. He’s a sturdy, tough and skilled striker with enough wrestling and stamina to push a pace McGregor may not be able to maintain–especially after a long layoff.

Cerrone was the least menacing option of fighters with any level of appeal. That’s why a loss for McGregor would be even worse. His logical options would seemingly be more limited and frankly, it’s not a given a man of his wealth and fame could withstand another significant blow to his ego.

Come January, the pressure will be on McGregor to prove he’s still an elite fighter and not just the biggest name.

Sergio Agüero Out, Sean Longstaff In: The Keys For Newcastle United Against Manchester City