Breaking
Top Stocks To Short Today As Markets Fall...
Branson Says Capitol Riots Stem From White Americans’...
Three New York-Based Sustainable Fine Jewelry Brands That...
This Week In Credit Card News: No-Interest Credit...
Thirteen Predictions For 2021 In Sustainability Private Equity...
How Too Much Optimism On Vaccines And The...
Nine Strategies To Make Your New Year’s Resolutions...
Paper-Free Isn’t Enough: The Keys To Sustainable Web...
The Era Of Multimedia Engagement
Is Twitter’s Stock Move Overdone?
Why Does The Chancellor Refuse To Help The...
‘WandaVision’ Episode 1 Recap And Review: A Crackerjack...
How To Move From An Office To A...
Managing Customer and Vendor Relationships: 4 Things to...
Prince Charles Wants Companies To Raise £7.3bn For...
$3 Million Martian ‘Drone With Claws’ Set For...
Home Finance Don’t Be Left Behind – This Stock Market’s Rise Is Going To Speed Up
Finance 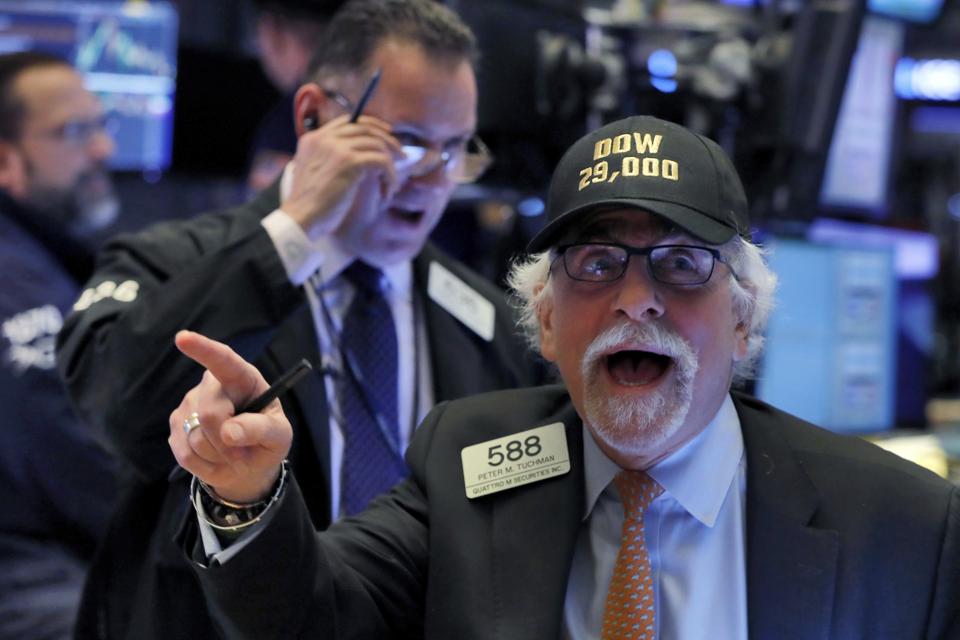 The dramatic, positive change in Wall Street’s growth outlook is happening fast, and investors (including many professionals) are having a hard time adjusting. After all, only four months ago they clearly saw a recession ahead along with a stock market correction or worse.

Because we have not seen a true growth-driven bull market since the 2013-2014 period, investors are still wrapped up in all the intervening discussions, rationale and volatile concerns. (Yes, the year-end 2017 corporate tax reduction bill generated visions of high growth that pushed the stock market up, but all of that vanished in early 2018 when President Trump began his tariff actions.)

The good news is that it is not too late to get fully invested in the U.S. stock market. As The Wall Street Journal reported on Friday (January 17), “Stocks Continue Quiet Ride, But Slow Pace Unsettles Some.” Note two things:

Those two items, together, indicate investors are hesitating to buy because optimism is not apparent in the market’s rise. For investors willing to commit, this is an excellent buyers’ market. Stock prices so far are tracking, not exceeding, the improving growth outlooks because investor enthusiasm remains in check.

Overvalued stock prices occur when investors are overly optimistic, excited and willingly to pay whatever it takes to get in on the ride. Also, risk appears reduced because of all the good news. Fortunately, we have a long way to go before we need to worry about that.

So, where is all the positive news?

First off, it is not in yesterday’s economic reports. For example, one of the lagging areas to improve is manufacturing, so bearish articles all include it. However, those weak reports are yesterday’s news.

The Wall Street Journal (Friday, January 17) has an excellent article that addresses these issues: “Global Rebound Doesn’t Hang On Trump’s Trade Deal” (Subhead: Although headline economic data hasn’t improved dramatically, there are tentative signs that a global rebound was already on its way before the latest trade truce.)

The article leads off with a description of the general investor attitude today:

“Investors face a contradiction: Stock markets so far in January have been full of new-year optimism, buoyed by the trade truce, but economic data hasn’t gotten much better.”

Explaining the stock market rise is this fundamental outlook (underlining is mine):

“Meanwhile, markets are priced for a sudden economic turnaround. Analysts expect the earnings of S&P 500 companies to grow by 5% year on year in the first quarter of 2020 and accelerate from there. Earnings in the third quarter [2019] shrank and are expected to have shrunk again in the fourth.”

This is the perfect picture of a trend change at work: “economic data hasn’t gotten much better” and “earnings… are expected to have shrunk again in the fourth” quarter, combined with Wall Street’s forecast earnings growth view.

Here is where manufacturing gets a happy face. The article provides three leading indicators that provide a positive growth outlook (underlining is mine).

Beneath the surface of the headline data, though, there are signs that investors could still—mostly—get what they want.

A few days ago, China’s export freight rates, as collected by the Shanghai Shipping Exchange, suddenly jumped to their highest level since 2015. This indicator traditionally leads moves in Chinese exports themselves. The price of copper, another closely watched bellwether for the health of global trade, is up more than 7% over the past two months.

And although surveys of purchasing managers in the Eurozone—a particularly export-dependent region—have pointed to continued weakness in manufacturing, the indicator for new export orders has been edging up in recent weeks.

The Wall Street Journal converted the favorable December retail sales report into a cautionary view in Friday’s (January 17) article, “Consumers’ Glass Is Half Empty.” (Subhead: Retail sales are humming along, but there are more catalysts to send spending lower than higher.) (Underlining is mine)

The Commerce Department on Thursday reported that retail sales rose 0.3% in December from November, matching economists’ expectations. Sales excluding auto dealers, gas stations, restaurants, and building equipment and garden suppliers—the control group that economists use to track the trend in consumer spending—were up an even more robust 0.5%.

But there were also revisions that lowered the control sales figures for October and November, making it clear that consumer spending, while decent, softened in the final months of the year. Forecasting firm High Frequency Economics estimates that consumer spending grew at a 2.4% annual rate in the fourth quarter, down from 3.1% in the third.

How will the trend shift develop?

This changing trend period will evolve as more-and-more investors switch to bullish beliefs. Improving data will be an important impetus, as will the media reports picking up the shift. So will rising stock prices, themselves, because they will confirm to buyers that they made the right decision.

The 2020 economic and business reports will validate the growth results – whatever they may be. If, as expected, the growth rate, itself, accelerates during the year, that trend will become visible and likely be much commented upon.

With positive results visible, expect most investors to be on board by mid-year. Barring a negative change in Wall Street’s outlook, the stock market could be in a classic growth stage.

We are in a trend-shift period, going from pessimism to optimism. The leading indicators show the change occurring both broadly and quickly. While the stock market is rising, it appears to be tracking Wall Street’s fundamentally based outlook. In other words, stock prices still represent reasonable valuations of future prospects.

For many investors (and the media), former bearish beliefs are hard to change. The improvements expected by Wall Street are not yet in the data. Therefore, those investors see higher stock prices equating to higher risk, not higher expectations.

The investment advice of “Buy the rumor, sell the news” is always at work in the stock market. Therefore, when the economic and earnings data confirm whatever the future turns out to be, expect the stock market to have already revalued in anticipation of the new outlooks. More growth ahead? Prices will be up. Increasing growth rate? Faster price rises. Bullish investors? The sky’s the limit! (Okay, we all know that’s a danger signal – right?)

Now looks to be an excellent time to fully invest in U.S. stocks.