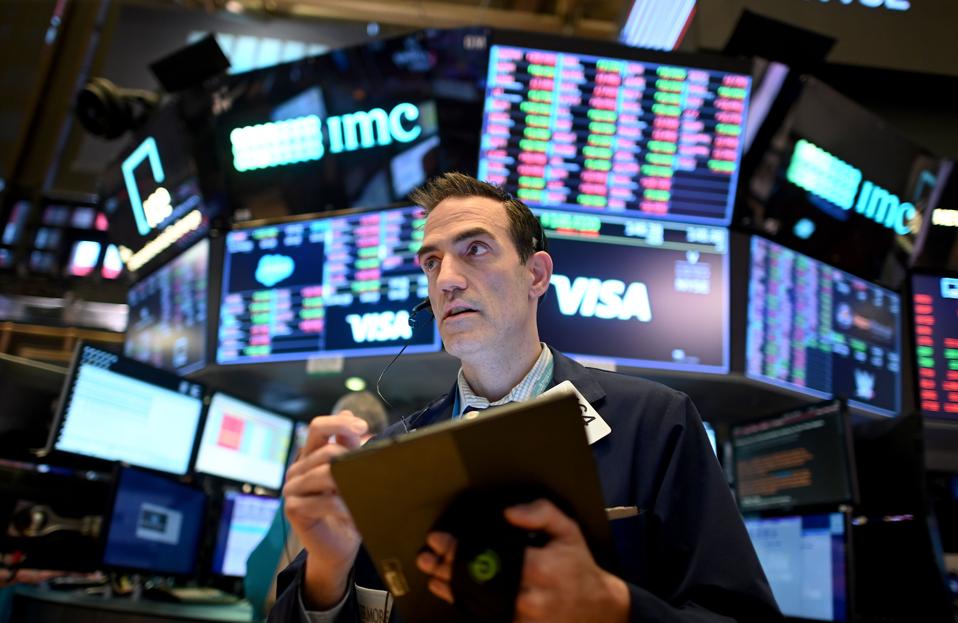 TOPSHOT – Traders work during the closing bell at the New York Stock Exchange (NYSE) on March 18, … [+] 2020 at Wall Street in New York City. – Wall Street stocks plunged again March 18, 2020 as the economic toll from the coronavirus mounts and economists warn of a deep recession. The Dow Jones Industrial Average tumbled 6.3 percent, or more than 1,300 points, to close the day at 19,903.50. The index sank by as much as 10 percent earlier in the session, which saw trading halted yet again. (Photo by Johannes EISELE / AFP) (Photo by JOHANNES EISELE/AFP via Getty Images)

The Dow Jones futures are trading lower as traders lost their faith in coronavirus stock market rally. This is due to the second coronavirus wave and fragile U.S. economic data. The U.S. has over 3 million Covid-19 cases, and Florida has experienced record deaths. We are not seeing the economic activity improving at a pace that was previously anticipated. For instance, there are 95% fewer people eating at outdoor restaurants in New York than a year ago.

Donald Trump is assuring Americans that he has a plan to put America back on track. The fact is that Covid-19 has triggered a massive wave of bankruptcies in America. We have seen a surge in bankruptcies in sectors such as retail, airline, and restaurants. Many big names like Hertz, J.C. Penney, and Brooks Brothers have also become victims of coronavirus. Investors are concerned about the third quarter stock earnings season, which is likely to bring more unpleasant news.

The stock market rally in the U.S. is immensely uneven. This is because the tech sector has done most of the lifting so far. The rest of the S&P 500 sectors have started to give up their gains. Leisure and banking sectors are sitting on top of this. Stocks such as American Airlines, United Airlines, Bank of America, JP Morgan, and Goldman Sachs have taken a severe beating this week.

The hopes are pinned on the next possible stimulus package. Trump is pushing for a $2 trillion stimulus package, and Congress will decide on this. Traders may get some favorable news because the odds are high for intermittent periods of shutdown in the U.S. due to the coronavirus. The U.S. stock market needs a new catalyst, and this could be the answer to their prayers.

The global stock market had a negative session today. Red was the dominant color across Asia. The HSI index was the worst performer and closed lower by 2.13%. The Shanghai index lost 1.34% of its value, while the Japanese Nikkei and Korean Kospi fell 0.75% and 1.14%, respectively.

The stock market’s breadth shows a modest change in bear momentum among day traders. 37% of the Dow Jones stocks traded above their 200-day simple moving average SMA—the same number as the day before.

The Dow futures are trading lower today by 200 points and set to post weekly losses.

The Dow Jones futures broke another critical price level yesterday, and that is the 50-day moving average on a daily frame. Traders are likely to feel uncomfortable with the Dow stocks because the Dow Jones price is trading below the 200 and 50-day SMA. The only hope for the bulls is that the Dow’s price remains above the 100-day SMA. 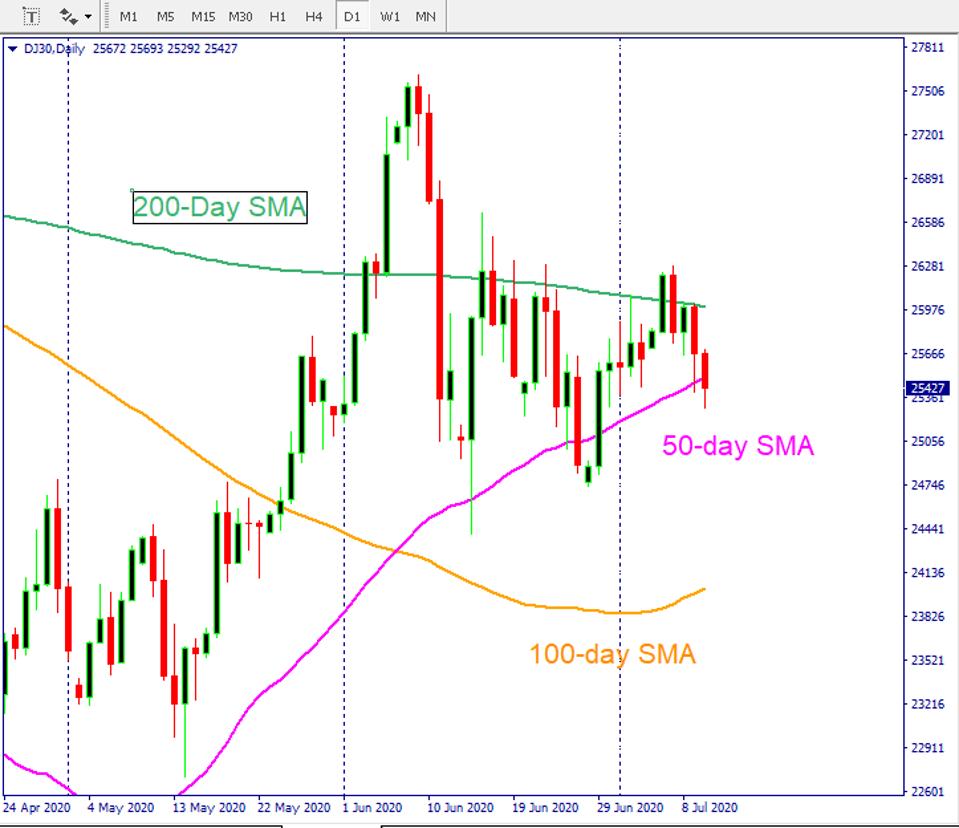 The U.S. stock market came under immense selling pressure yesterday. However, investors are still willing to pay a premium for tech stocks. It is the only sector that is saving the coronavirus stock market rally from a U-turn.

The S&P 500 stocks recorded losses yesterday and closed lower by 0.56%. Consumer discretionary and information technology sectors were the only ones that closed with gains. The rest of the ten sectors recorded losses.

The Dow Jones industrial average fell by 1.39%. Twenty-five shares fell, five stocks advanced. UnitedHealth recorded most of the declines, and Walmart kept the index off its lows of the day.

The NASDAQ, the tech-heavy index, still recorded another all-time high yesterday and advanced 0.82%.

Coronavirus situation continues to become worse in the U.S. as both Florida and Arizona have seen record hospitalization and death. The spotlight is once again on the second coronavirus wave that has emerged around the globe. Hong Kong is likely to close all schools with immediate effect due to the jump in local coronavirus cases.

On the other hand, Trump is keen to open the schools in the U.S. in the coming fall. He has threatened to cut the funding if schools do not reopen. In his tweet, Trump said, “In Germany, Denmark, Norway, Sweden and many other countries, SCHOOLS ARE OPEN WITH NO PROBLEMS. The Dems think it would be bad for them politically if U.S. schools open before the November Election, but is important for the children & families. May cut off funding if not open!”

Trump administration has taken another strict measure against China and sanctioned Chinese officials for human rights abuses in China’s western province of Xinjiang. Trump has repeatedly blamed China for coronavirus. He has called the virus “China Virus”.

France could become the target of Trump’s anger today because of French taxes on US tech giants. The U.S. government is expected to announce tariffs on French goods today; the number could be between $500 million to $700 million. This could include French cheese and French wine.

How To Create A Brand That Attracts Luxury Buyers