Dow Plunges Over 200 Points Amid Record Drop In GDP

The market fell sharply on Thursday after the U.S. economy posted its worst quarter ever—contracting by 32.9% on an annualized basis—while the Nasdaq turned positive thanks to shares of Big Tech companies rising ahead of earnings. 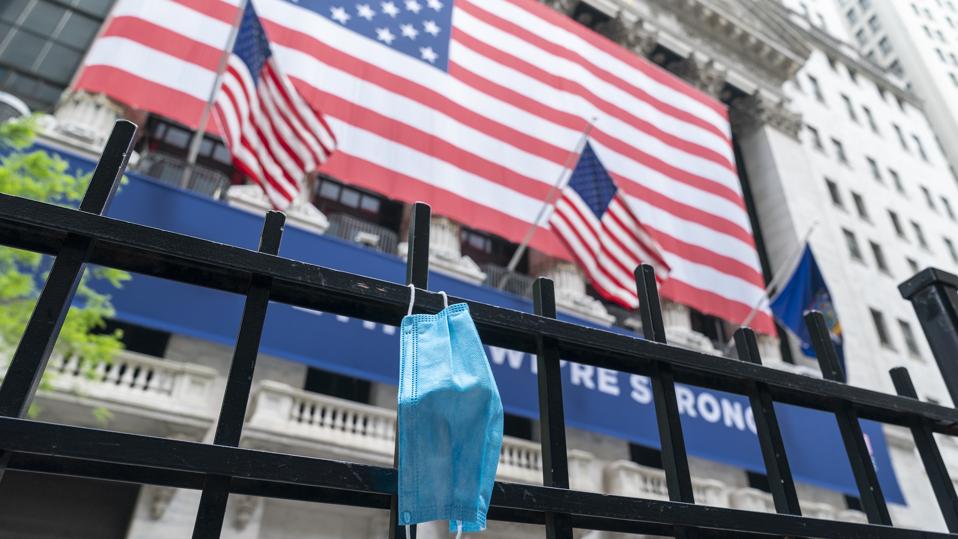 The U.S. economy posted its worst quarter on record.

While the broader market fell, the Nasdaq turned positive thanks to shares of Big Tech companies like Apple, Amazon, Facebook and Google-parent Alphabet moving higher ahead of second quarter earnings later on Thursday.

Stocks tanked after data showed that the U.S. economy suffered its worst contraction ever in the second quarter, plunging by a record 32.9%—though economists were expecting a drop of 34.7%.

Markets also took a hit after weekly jobless claims came in at 1.43 million: While that was roughly in line with estimates, continuing claims rose to over 17 million from 16 million last week.

Meanwhile, the busiest week of earnings season continued, with Procter & Gamble and UPS moving higher after reporting strong sales of cleaning products and a surge in second-quarter home deliveries, respectively.

“The worst GDP number in our lifetime wasn’t a surprise, due to consumer spending coming to a sudden halt last quarter,” says Ryan Detrick, chief investment strategist for LPL Financial. “The good news is this number is backward looking and we can now look forward, as the rest of 2020 should show major improvement.” He adds that “initial jobless claims have stubbornly refused to go lower lately, a different story than much of the other improving economic data… Jobs are a key part to this recovery and this shows yet again how bumpy the recovery is going to be.”

While shares of Big Tech companies are among the best-performing stocks so far this year, there are rising concerns on Wall Street that heavy market concentration in this handful of big names could pose downside risks.

The Federal Reserve wrapped up its two-day policy meeting on Wednesday, leaving interest rates unchanged at near zero. Fed officials said that U.S. economic activity and employment “have picked up somewhat in recent months but remain well below their levels at the beginning of the year.” The last time Fed officials met in June, they decided to maintain the target range for the federal funds rate at 0% to 0.25%. On Tuesday, the central bank announced that it would extend loan programs through the end of 2020 as it continues to support the U.S. economy amid the pandemic.

Apple, Microsoft, Amazon, Google And Facebook Make Up A Record Chunk Of The S&P 500. Here’s Why That Might Be Dangerous (Forbes)

Smart Factories: 3 Steps To Greater Resiliency On The Shop Floor

The Economic Crash: What Wall Street Doesn’t Know Will Hurt Us

Want Your Business Relationship To Last? Get To...