Breaking
Why You Should Fire 90% Of Your Clients...
15 Smart Ways To Get More Mileage Out...
14 Smart Ways To Leverage Machine Learning For...
Three Lessons The Life Insurance Industry Learned During...
Why Convenience Is Essential
Norway’s $1 Trillion Oil Fund, BlackRock And Vanguard...
Sennheiser Makes Open-Back Headphones More Affordable With The...
Artificial Intelligence Is Ready For Prime Time, But...
Satellite Science Is Helping The Environment, From Farms...
Corporate America’s Employment Problem Isn’t Just Race But...
Designing Household Appliances With Planet And Health In...
Fauci: ‘We’re Nowhere Near Herd Immunity’ In The...
Behind The Curtain—Chapter 11 From The Inside—Chapter 10—The...
Three Classic Ways To Get New Business
Email Marketing Consulting
With Hope, Perseverance And Faith, Two Friends Are...
Home Finance Drug Stock’s Rally Could Have Room To Run
Finance

Drug Stock’s Rally Could Have Room To Run

Biopharmaceutical company AstraZenica (NYSE:AZN) has been making an effort, like most of the market, to dig itself out of this month’s disastrous sell-off. The U.K.-based drugmaker bottomed out at $36.15 on March 16, and since then has added roughly 23% — closing the bear gap it suffered earlier in the month, just yesterday. And while the stock appears to be running out of steam today, trading flat at $44.55 at last check, it just ran up to a historically bullish technical signal that could help AZN on its next leg higher.

The technical signal in question is AstraZenica’s 40-day moving average, which the equity just came within one standard deviation of after a lengthy period below the trendline. According to a study from Schaeffer’s Senior Quantitative Analyst Rocky White, AZN has seen two similar signals in the past three years, and the equity was higher one month later both times, averaging a one-month return of 10.83%. a similar move, from AZN’s current perch, would put the security at $49.37, just below its late-January record highs. 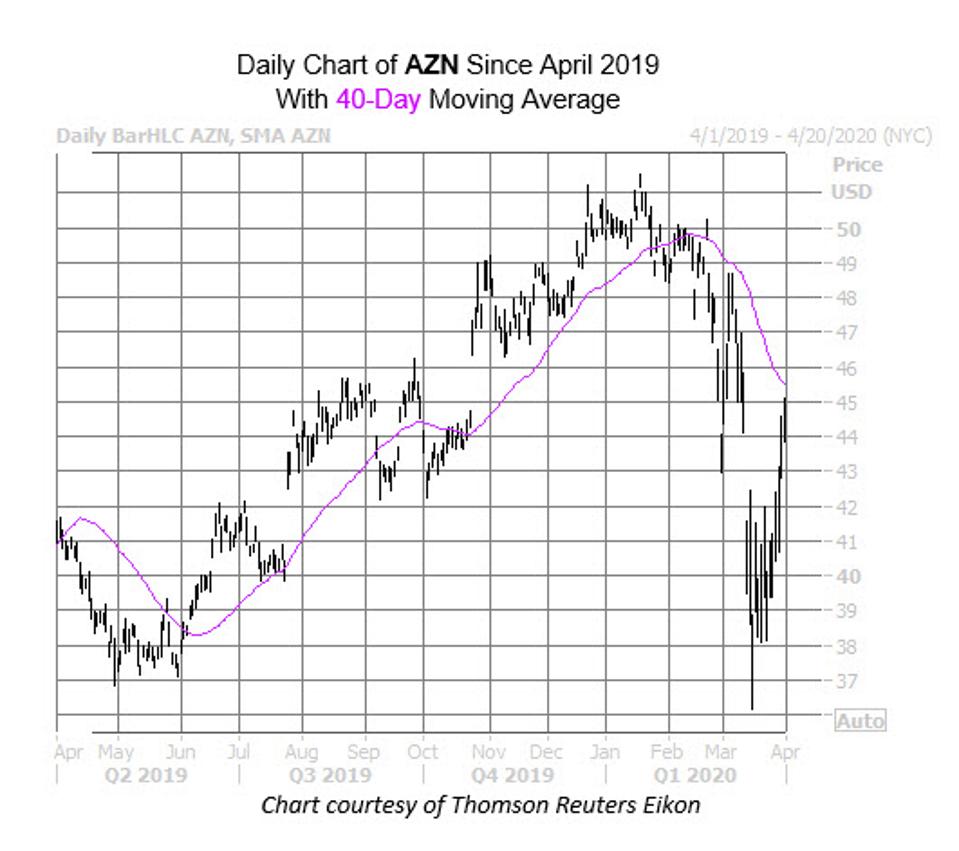 Analysts are generally optimistic on the biotech. Four in coverage call AZN a “strong buy,” while just two say “hold” or worse. Meanwhile, the consensus 12-month price target of $53.05 is a 19% premium to current levels.

While overall volume is light, options traders have also been bullish. In the past 10-days, 2.52 calls have been picked up for every put at the the International Securities Exchange (ISE), Cboe Options Exchange (CBOE), and NASDAQ OMX PHLX (PHLX). That being said, options look like a good way to speculate on AZN’s next move. The stock’s Schaeffer’s Volatility Index (SVI) of 30% sits higher than just 20% of all other readings from the past year, meaning options players are pricing in relatively low volatility expectations for AstraZenica right now.