Breaking
ESBC Major Updates: Tons Of Heavyweight Greats Added...
5 On-Demand Courses To Help Develop Your Leadership...
How to Run Nonprofit Marketing Ads
Entrepreneurs Are Bringing Transparency To Home Buying And...
Best Incentive To Get Vaccinated: Money, Messaging, Or...
Page Level Query Analysis at Scale with Google...
How A CIO Can Align IT With Business...
Blogger of the Month: Jo, Girl Eats World
6 Things Women In Business Know That Men...
How to Use First-Party Data for Ad Personalization
Pressing Reset—Putting A Fallen Unicorn Back On Its...
How We Went Viral: Promoting Content with Influencers,...
Blame Olympic Record Price Tag For Return To...
Apple iOS 14.5 Release: Should You Upgrade?
How to Come up with Podcast Topics and...
Why Gaming Gear Company Razer Launched A $50...
Home Business Dua Lipa Claims Two Top 10 Hits In The U.K. While The Weeknd Leads The Charge
Business

Dua Lipa Claims Two Top 10 Hits In The U.K. While The Weeknd Leads The Charge 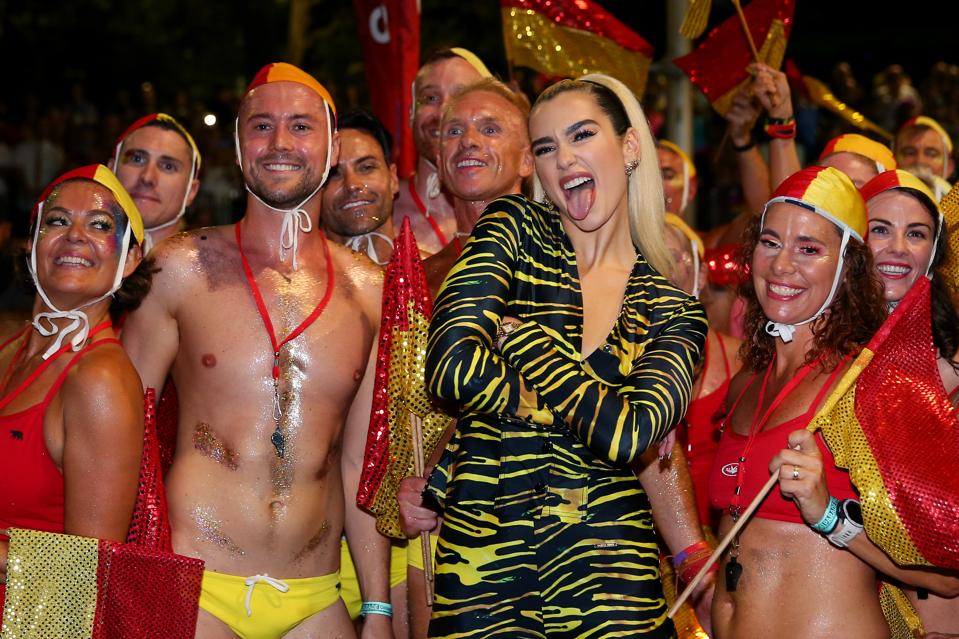 SYDNEY, AUSTRALIA – FEBRUARY 29: Dua Lipa poses amongst life guards during the 2020 Sydney Gay & … [+] Lesbian Mardi Gras Parade on February 29, 2020 in Sydney, Australia. The Sydney Mardi Gras parade began in 1978 as a march and commemoration of the 1969 Stonewall Riots of New York. It is an annual event promoting awareness of gay, lesbian, bisexual and transgender issues and themes. (Photo by Don Arnold/WireImage)

The Weeknd rules the U.K. singles chart for a fifth nonconsecutive turn this time around with “Blinding Lights,” which only stepped aside for one frame to allow Billie Eilish’s James Bond theme song “No Time to Die” to debut atop the list. The Canadian superstar’s latest, which previews his new album After Hours (expected later this month), is a non-mover on the throne, and it may continue to hold onto the highest rung for another week or two.

Also steady is this week’s runner-up, Saint Jhn’s “Roses,” which is battling for the top spot, but coming up short.

The highest-ranking new single on this week’s songs chart in the U.K. comes from the powerful trio of Aitch, AJ Tracey and Tay Keith, who teamed up to produce “Rain.” The song debuts at No. 3, becoming a big hit for the three musicians. The track is Aitch’s fifth top 10, AJ Tracey’s third and Tay Keith’s first in the country.

Pushed out of third place by the incoming “Rain” is “The Box” by American hip-hop star Roddy Ricch. The international smash stalled just one rung shy of running the show in the U.K. earlier this year and is now slowly working its way down the ranking.

Back inside the top five after departing the region recently is Dua Lipa’s “Don’t Stop Now,” which similarly missed out on running the show by just one spot. The pop singer claims two positions inside the top 10 this frame, but more on that in a minute.

After starting its time on the U.K. songs list at No. 1, Eilish’s “No Time to Die” has been taking its time descending, and in its fourth turn on the tally it’s down to No. 6, coming in just ahead of Joel Corry’s stationary “Lonely.”

The second new entrant inside this week’s top 10 comes from Dua Lipa, who scores another smash with her latest release “Physical.” The track, which serves as the second official single from her forthcoming new album Future Nostalgia, jumps from No. 13 to No. 8, coincidentally becoming the superstar’s eighth tune to reach the region.

Up to a new peak position of No. 9 is Doja Cat’s “Say So,” which broke into the top tier last frame. The rising talent’s first top 10 hit in the U.K. outpaces Lewis Capaldi’s “Someone You Loved,” which slips to No. 10 and looks like it may be ready to depart the area after 31 frames somewhere between Nos. 1 and 10.

How To Shrink Your Tax Bill For Employer Stock Grants

Coronavirus Shuts Down ‘The Walking Dead,’ ‘Stranger Things,’ ‘The Flash’ Production, And More