Over the past few weeks — on these virtual pages — I have been trying to ask three questions. How are thinkers and artists adapting to the pandemic, particularly those who make their living exploring physical space ? If they are meaningfully occupied in their craft, what in fact are they doing? But most interesting to me is the question, what can thinkers and artists contribute to the public to help us reimagine the future? 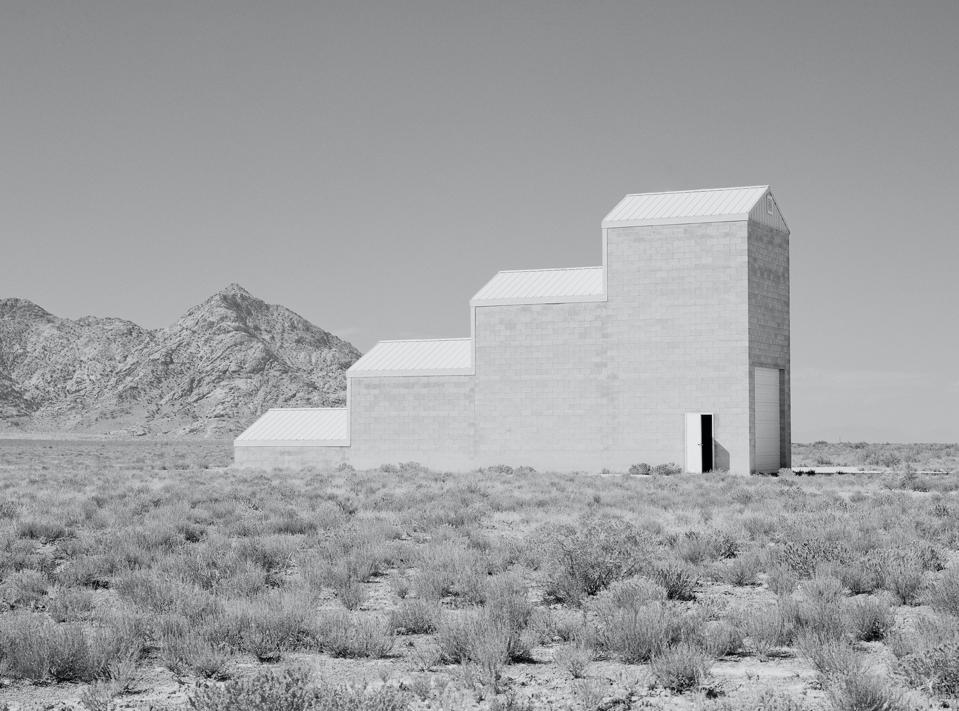 This enigmatic structure, the Air Force Targeting Grid Building, is designed to be seen from above … [+] by Air Force pilots as they make their way over Dugway in fighter jets at extremely high speed, en route to the Utah Test and Training Range.

I recently connected with Bay Area fine arts photographer David Maisel (we were friends in college, in the wayback) to discuss a monograph he was about to publish about his adventures documenting a secretive remote military facility in a Utah desert 85 miles south of Salt Lake City. Maisel, a Guggenheim fellow who has made his reputation on large-scale projects involving unusual physical spaces, had learned of Dugway Proving Ground after making aerial photographs of the Tooele Army Depot as part of his earlier project Terminal Mirage.  His aerial images of sites throughout the American west tell an arresting, tragically beautiful story about how land has been ravaged by human assaults (a life-long preoccupation for Maisel). He set off on a journey to explore the interior of this staggeringly large facility, captured in Proving Ground, a large elegant volume with 145 stunning well-produced images.

While Maisel did not know his book would launch during the nation’s first 50-state natural disaster, it was as if this was the moment he’d been dreading all his life. What he learned in Utah were the large challenges of preparing for large-scale disasters and the limits of an earlier approach to scenario planning. 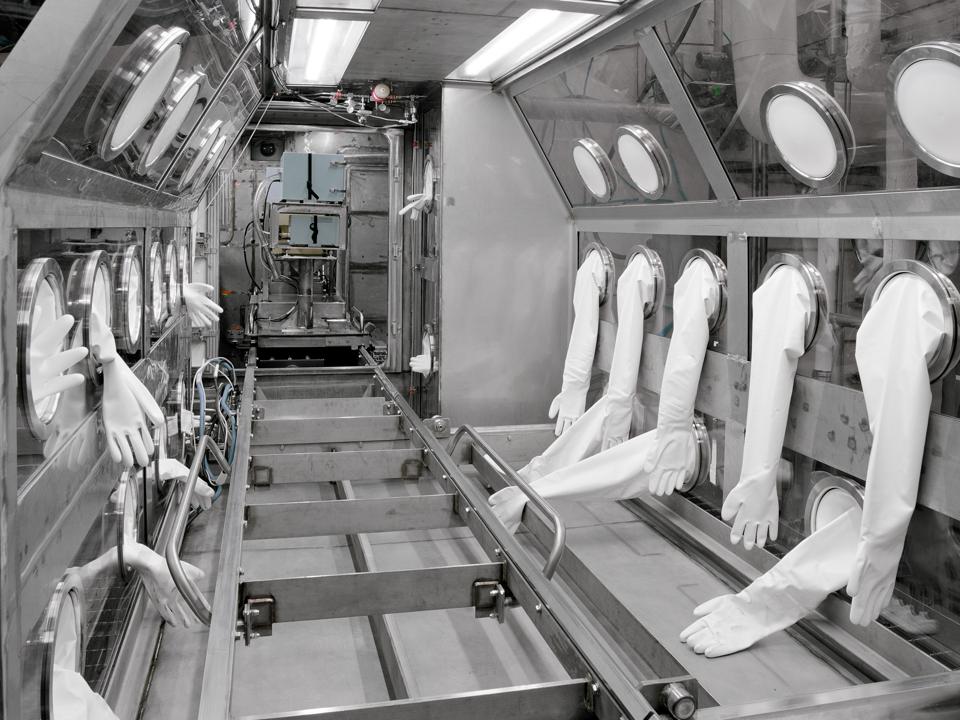 Maisel became interested in the architecture and design of labs at Dugway, which “expressed an … [+] unbridled faith in the power of technology.” This test chamber was designed to warn of the presence of deadly agents, including anthrax and plague.

The name of the facility is the Dugway Proving Ground, situated over an expanse of 800,000+ acres, roughly the size of Rhode Island. Since it was founded in 1941-42, the early years of our involvement in World War II, it has been “the nation’s primary chemical and biological weapons testing and training site … that combines the microscopic world of its chemical and biological laboratories with large-scale testing and training,” according to The Center for Land Use Interpretation, a non-profit research organization based in Los Angeles. For the war, the U.S. Army used Dugway to simulate attacks on German urban areas and Japanese hamlets using set pieces, physical theaters for simulating Armageddon. Since then it has researched and tested a wide range of scenarios involving nuclear reactor meltdown tests, cosmic ray studies, and chemical weapons disposal research. “Though Dugway has used live biological and chemical agents in open air tests on its ranges in the past, current field training is done with ‘simulants’ — inert materials with characteristics similar to dangerous agents,” according to the Center. That the raison d’etre of Dugway is the remote safe simulation of real disasters, intentional and unintentional, is an important message that the Army has felt it needs to convey to the public. On its website, the Army touts Dugway for providing “unparalleled testing, evaluation, training and technical support while maintaining a world-class workforce, facilities and quality of life for our employees and their families.” Dugway still works with live materials like anthrax, sarin, and chlorine gas in closed environments. Chlorine gas has been detonated in open air in recent years, to simulate a terror attack using this as a toxin. 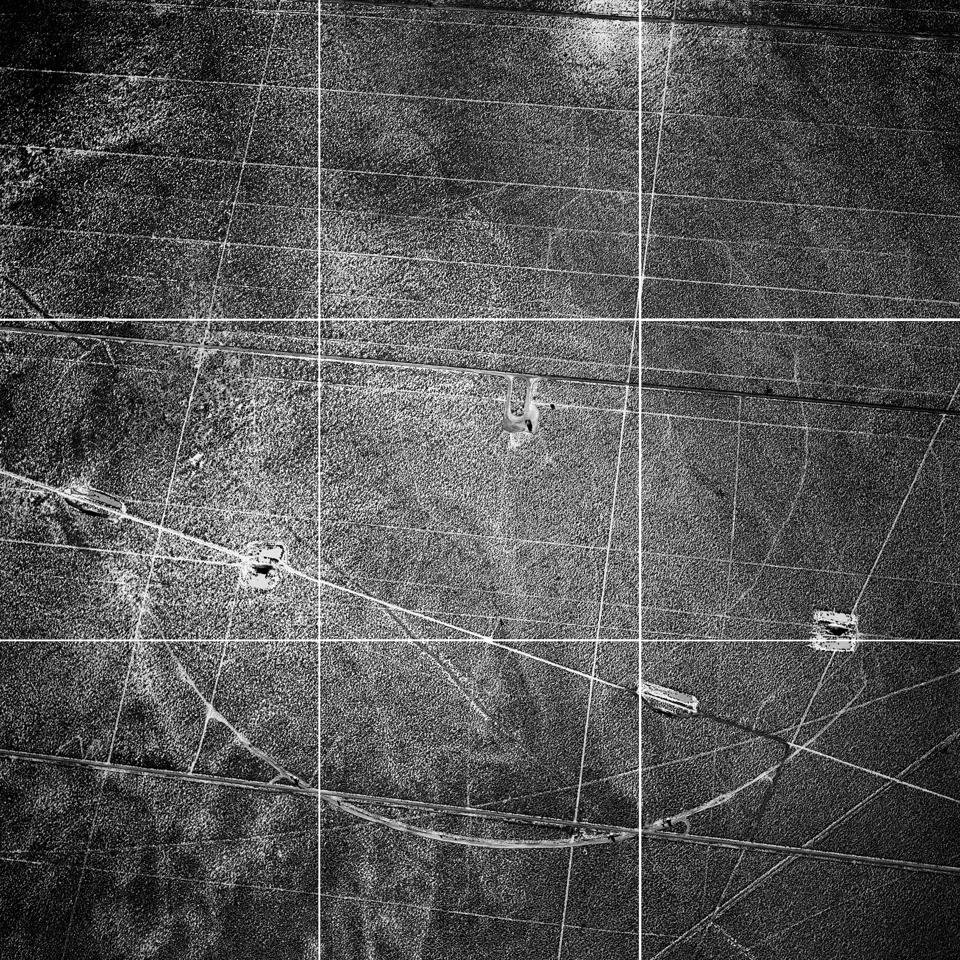 So, the controlling idea for Dugway is “remote.” The safety of simulating remotely. And the security of simulating remotely, away from prying eyes. To get onto the facility and meaningful places above it by plane, Maisel had to petition the Department of Defense for a decade. And when he got there he was greeted by officials who were respectful but needed to follow strict boundaries and protocols. A guide assigned to Maisel helped him navigate the spooky ghost town-like terrain while visitors — a motley crew of hippies, rockabillies, cowboys — gathered for an onsite trade show on the edge of civilization, featuring any number of technologies that could be used in military settings. On the outskirts of Dugway, UFO hunters have wandered, wondering what is really happening on all that land. Hunter Thompson would have fit right in, to chronicle the intermittent social spectacle. 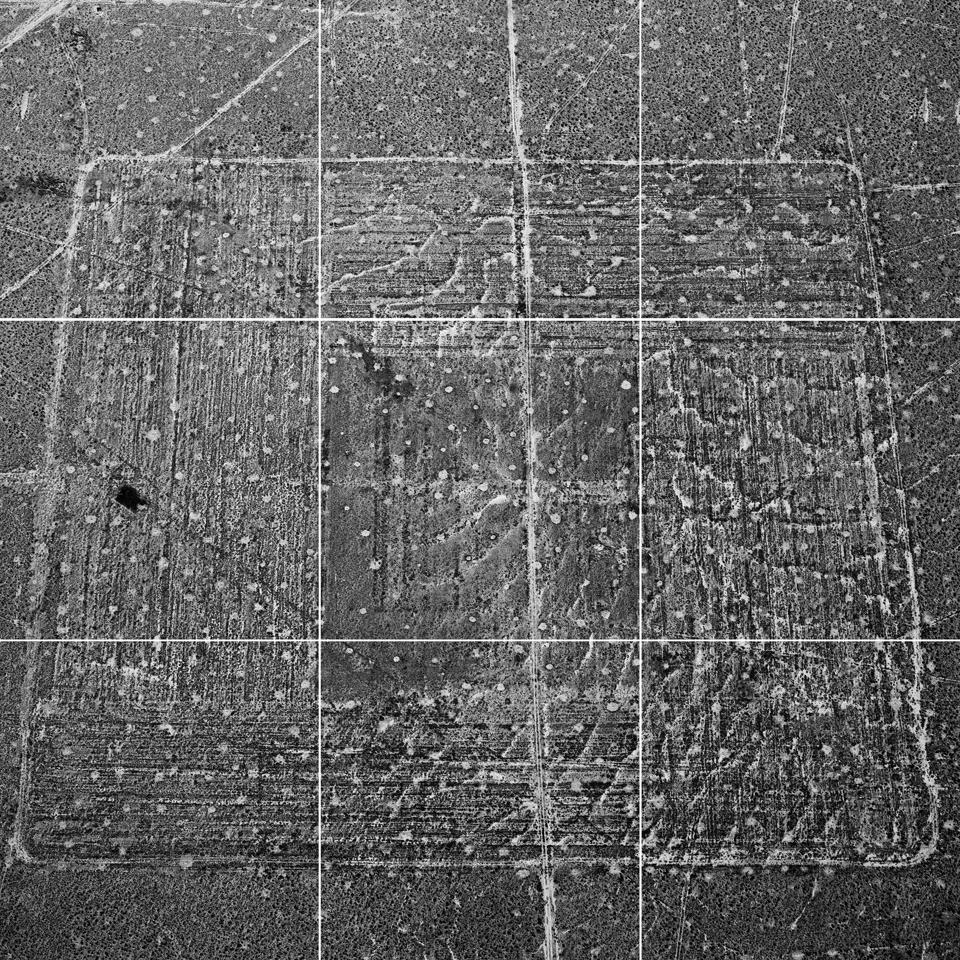 Another weapons testing grid. Maisel found it interesting that the names the military gave to these … [+] sites sometimes referenced abstracted visual metaphors.

Remote is an approach that seems to have worked through most of Dugway’s history, but because of the nature of its mission, full transparency has always been off the table. What is clear are some of the mishaps which, for brief intervals, got a watchful public to question the efficacy of safety controls at Dugway, despite its remote location. In 1968 — in an episode known as the Dugway Sheep Incident — a Dugway test involving a nerve agent — killed almost 4,000 sheep grazing 30 miles away. Though the Army denied responsibility, it paid ranchers for their losses. In 1994, according to a GAO report, it was “unknown how many people in the surrounding vicinity were also exposed to potentially harmful agents used in open-air tests at Dugway.” More recently, in 2015 it was revealed that since 2007 Dugway had accidentally shipped live samples of Anthrax to research facilities both internationally and domestically, believing the samples were inert. Over time, Dugway has been the target of environmental-protection groups. The secrecy of what went on inside Dugway fed distrust. 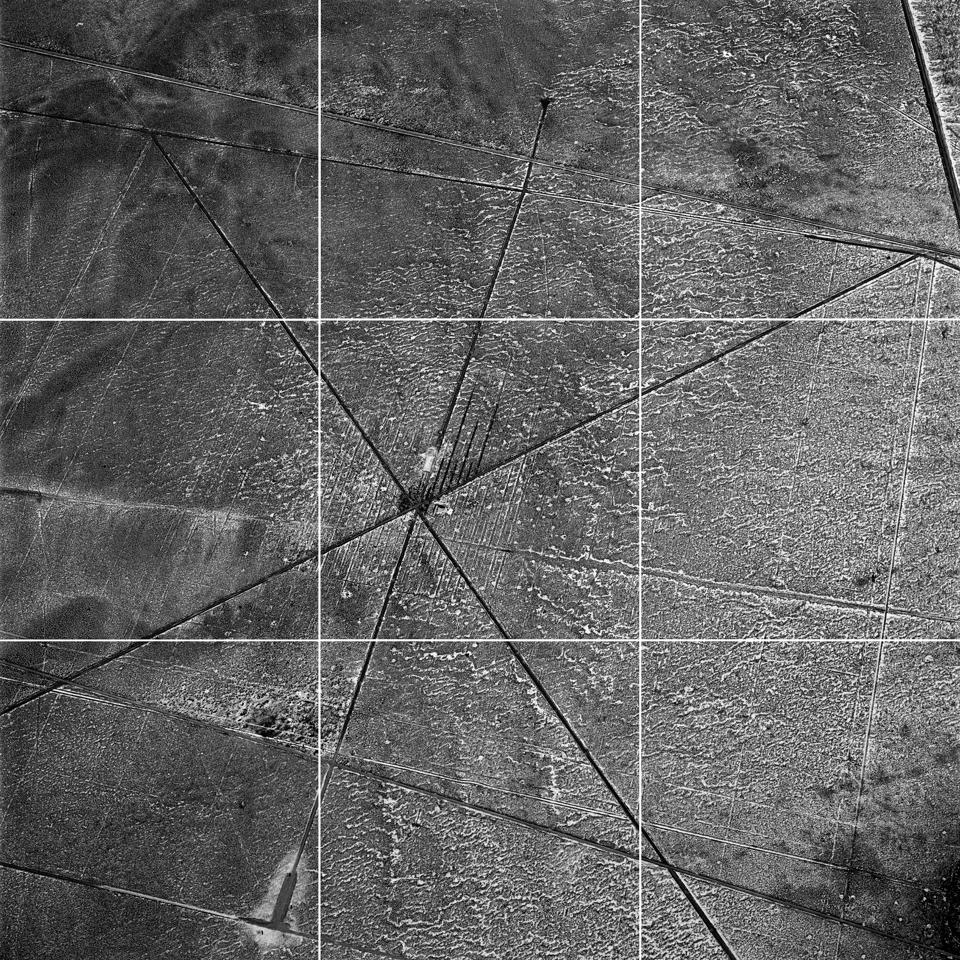 This depicts a weapon testing site inscribed into the desert floor. It was this image in particular, … [+] with its gridding of a vast swath of space, that inspired Maisel to apply his own grid over these aerial images.

Without compromising the security of the project, Maisel pulls parts of Dugway out of the shadows. The mechanics: he worked with film cameras, not digital. Film is how he thinks in the photographic medium. For the aerial images, he used a Hasselblad medium format camera; it yields a 6x6cm negative. He also used a gyroscopic stabilizer to help steady the camera and absorb vibration from the plane during exposures. For the interior WSLAT images and the image of the Air Force Target Grid Building, he worked with a FUJI 680 camera. Like the Hasselblad, it yields a medium format negative, but it also has some of the functions of a view camera which make it perfect for working with architectural subject matter. 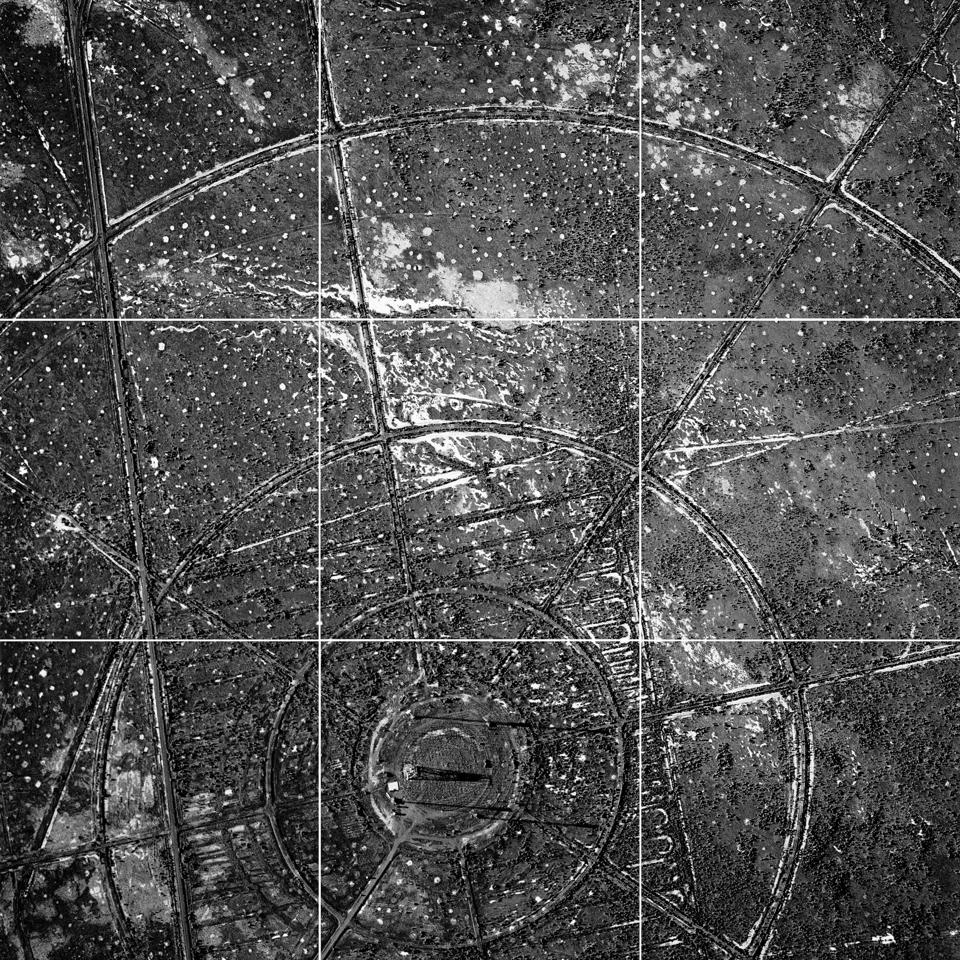 Looking down from above, which Maisel shot from a small aircraft, reveals colossal weapons testing … [+] sites that are carved into the land, nested circles and crosshatched grids.

The result: an artistic proving ground for visually telling the story of the Dugway project’s scope, limitations, and techno-enthusiasm in manipulating a vast physical space. And Maisel is telling this story at a time the U.S. is feeling the strain of responding to another kind of biodisaster. The nation, it turns out, has been straitjacketed by lack of long-term planning and an inadequate infrastructure to protect itself from the spread of the virus. In other words, there has never been a Dugway for pandemics. Maisel may or may not choose to make COVID-19 his next assignment; the invisible can only be made visible through microscopic art, not the large-scale canvas on which Maisel often paints. But as with so many artists who are now thinking of the public value or their work, beyond aesthetics and experience, I would not be surprised to hear that Maisel used this time to rise to the occasion and prepare for this challenge. If ever there were an artist ready for this, he might be the one. 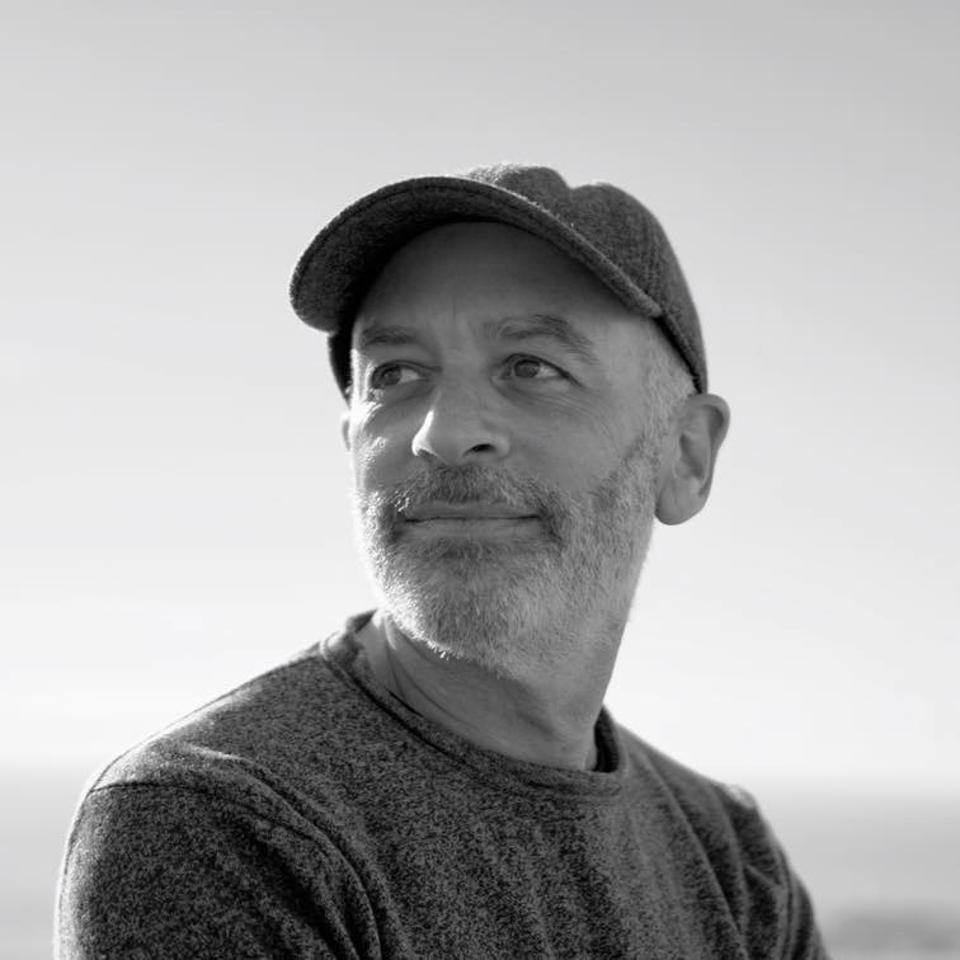 How To Spot Companies Accelerating Through The Adoption Curve

Why Agile Is The Mindset To Get Us Through The COVID Crisis: 4 Lessons From Agile For Today And The New Normal

Where Americans Are Traveling This July 4th Weekend...