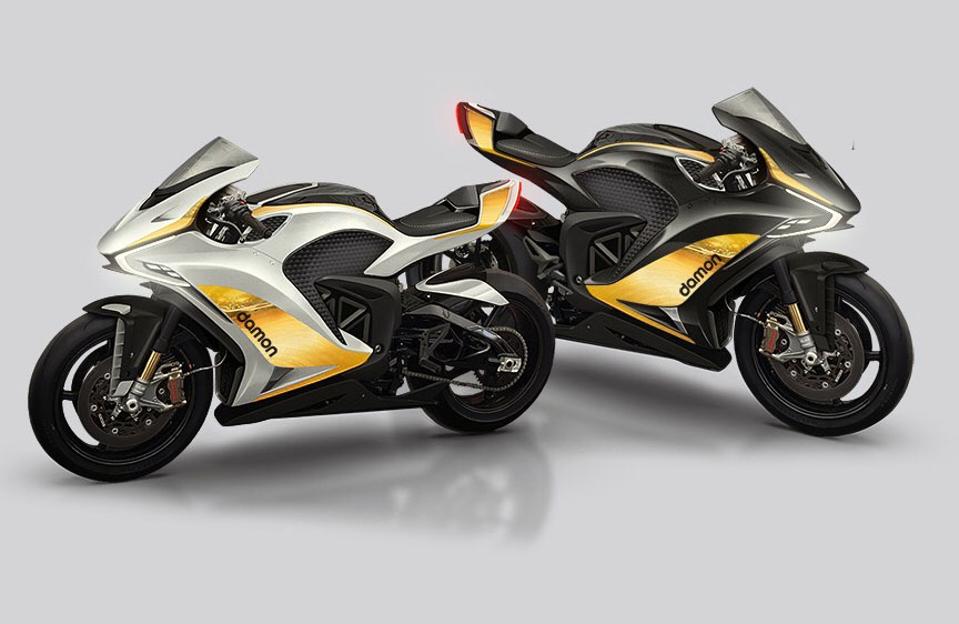 Damon will expand their Premiere offering with a new run of bikes in either Arctic Sun or Midnight … [+] Sun.

Electric motorcycle startup Damon is pressing on with their planned production of the Hyperport electric bikes, and they’ve now expanded their offering with more high-end bikes outside of the original 25 $39,995 Founder’s Edition Premiere machines, which quickly sold out on pre-order.

Damon CEO Jay Jiraud told Forbes the company has raised another $3 million in funding and has also scooped the intellectual property of Mission Motors, an early player in the electric motorbike field that folded in 2015. However, before they closed their doors, Mission fielded some potent machines and participated in early electric motorcycle competitions, so their tech will be another arrow in Damon’s quiver. Jiraud also revealed some key design elements of the bikes that will likely separate it from the (growing) crowd of electric motorbikes.

As for the new bikes, they will technically be the same machines as the initial 25 Premiere units to be built by Damon, which are now called the Founders Edition Premiere bikes. Following that, Jiraud said they received “several hundred” pre-orders for the regular $24,995 Hypersport HS but that they also had great interest from buyers still wanting the $39,995 machines beyond the initial run of the 25 bikes that were sold over the course of just four days following their reveal at CES in January. These new limited-edition “Premiere” units in the image at the top of this story – Jiraud would not say how many would be built in total – will also cost $39,995 but will only be available in the two color schemes as above instead of the custom color choices the initial 25 bikes were offered in.

It’s key to remember how different the Damon bikes will be from other makes when they hit the market, hopefully late this year or early in 2021. While electric motorcycles are not the hot sauce they used to be following the Harley LiveWire rollout and market leader Zero’s offerings, the Damon Hypersport machines will feature two very novel features: on-the-fly ergonomic adjustability via the Shift system, and a tech-laden proximity sensor package called Co-Pilot that will warn the riders of potential dangers while riding, powered by the BlackBerry QNX suite. Damon is also promising a 200mph top speed with a 200-mile range – at a more reasonable 60 miles an hour on the highway. City riding range will likely be even longer. Power output specs at this time include 200-horsepower and approximately 150 foot-pounds of torque, which are huge numbers for any motorcycle. Zero to 60 should arrive in under three seconds, according to Jiraud, and 0-100 in about four seconds.

Jiraud was very enthusiastic about some key data points they sifted out of all the pre-orders. “What’s really exciting is that… about 50% of everyone who’s ordered one of these bikes is under the age of 40 – which is really surprising because of the price, and because of the horsepower,” Jiraud said. “Which really means that these Millennials, that apparently don’t ride motorbikes, not only DO they ride motorbikes, I have to assume they’re pretty experienced riders. Our data says they seem to have at least 10 years of [riding] experience.”

With the Covid-19 outbreak on everyone’s minds, Damon made it clear that at present, they are not experiencing any delays because the bikes are still in the design stage and no assembly lines or production facilities are yet up and running. Damon showed a one-off prototype at CES that this author took for a test ride late last year.

But outside of that thankful non-issue (for now, at least), Jiraud did reveal a key design element that may better reveal how they plan to squeeze 200 miles of range out of the Hypersport’s planned 21.5kWh battery while keeping the weight at a svelte 440 pounds. For contrast, Zero’s new SR/S bike, with less range and a smaller battery, tips the scales at just over 500 pounds with a 14.4kWh pack, while Harley’s 549-pound LiveWire is in that same ballpark with a 15.5kWh cell. So how is Damon going to undercut those bikes by such a large margin? Frame design, for one. Jiraud revealed that the Hypersport bikes will feature the battery-as-a-stressed-member of the frame.

In gas-powered bikes, using the engine as a stressed member of the frame is an unusual practice as it requires an unorthodox approach to both frame and engine casing design, and is therefore rarely done. Examples include the legendary Honda “engine in the breeze” CBX six-cylinder motorcycle from the late 1970s and more recently, some Ducati offerings with very large price tags. Racebikes more commonly use the stressed-member approach for a simple reason: it saves a lot of weight. But with an engine whirling away at high speed and tightly bolted to the rest of the motorcycle structure, there are more vibration concerns and opportunities for structural failure. Not so on an electric motorcycle. Since the battery is not a moving part, vibration damping is less of a concern, but containing the battery – especially a large one – is. As such, Jiraud said the battery casing will be integral to the frame’s design. “That’s our big trick,” Jiraud told Forbes. “We’ve got a pretty unique chassis concept that’s really getting a lot of things to do more than one job in an effort to reduce mass and complexity.” Jiraud said the battery casing will be watertight, shock resistant and crash protected. “It’s not too much of a stretch… to imagine that case can act like a monocoque and be a structural member of the motorcycle.”

Heading up that design challenge is motorcycle design veteran Derek Dorresteyn, cofounder of Alta Motors, another early electric motorcycle pioneer that had a 10-year run and produced the well-received Redshift electric dirt bikes before shuttering in 2018. Dorresteyn, who was on the call with Jiraud, was key in Alta’s innovative approaches to frame design, motor placement and other elements in what was then a nascent field. Now, he’s COO of Damon. “The intricacy of this is super exciting,” Dorresteyn said. He said he’d be willing to share more details in the future but for now, the kitchen is closed while they cook up the design. However, he did say that once they do finalize the design, it could become the basis for a range of motorcycle models, which would allow Damon to diversify their lineup without having to redesign every bike from scratch. “This is where electric motorcycles really veer away from the traditional history of powertrains in the ICE [gas-powered] world,” Dorresteyn added.

For gearheads, that’s good stuff. For potential buyers and investors, it’s nice to see Damon looking farther down the road to efficient expansion, even at this early point. A quiet, torquey Damon dual-sport with adjustable ergos and 200 miles of range – or better? Sounds like a winner. “This is the start of a century of motorcycling being entirely different from the last,” Dorresteyn said.

In A 3-Point Shooting League, The Oklahoma City...

The Well Of Strength We Keep Inside: How...

Palladium Surges Again But The Focus Will Soon...

Is This The Year To Actively Trade Down...

Trading Kyle Kuzma For Derrick Rose Is An...