Breaking
How, When And Where You Can See A...
New $2.2 Trillion Stimulus Bill Proposed—$1,200 Stimulus Checks,...
Why Do We Do What We Do? Manipulating...
California Brand Goes All-American As Amazon Bans Foreign...
The 3 Best Analytics Companies of 2020
Senator Cory Booker: Supporting Small, Minority-Owned Businesses Will...
Trump’s Taxes Are Finally Leaked—What’s Next?
Washington Heats Up Ahead Of First Presidential Debate:...
Systemic Racism Leads To Disparities In Nursing Home...
The New Regular: Prepare For Conflicts Of Customer...
Web VR.0 – Have VR Websites (Finally) Arrived?...
This Next Evolution Of E-Commerce Did $18 Billion...
This Next Evolution Of Ecommerce Did $18 Billion...
IRS Taxes Most Lawsuit Settlements And Exact Wording...
13 Questions To Answer Before You Die
Just Launched: Long-Term Stock Exchange For Companies Building...
Home Business Elon Musk’s First Astronaut Launch Is One Giant Leap For Space Capitalism
BusinessTechnology

SpaceX will send a NASA crew into orbit this week, marking a major milestone in the mission of entrepreneurs to reclaim the galaxy from big government.

If all goes according to plan, veteran NASA astronauts Bob Behnken and Doug Hurley will lift off from the Kennedy Space Center in Florida on Wednesday morning. Less than a day later, they will arrive at the International Space Station. It will be the first crewed orbital flight from American soil since 2011.

Even more significant: It’s the first time ever that astronauts will travel to orbit on a privately-owned spacecraft (previous space-tourism stunts have been either decidedly sub-orbital or provided by the Russian government). Behnken and Hurley will be hitching a ride on a Dragon capsule, launched by a Falcon 9 rocket, both designed and manufactured by Elon Musk-founded SpaceX. The pair will even be conveyed to the launch pad on Tesla-manufactured electric cars.

It’s a triumphant moment for Musk and his Hawthrone, California-based company. But this isn’t just a victory for one billionaire and one company. It’s a culmination of a decades-long effort to transform space into a new frontier of entrepreneurship.

“This is the same excitement I felt as a kid during the Apollo moon landings,” says Tom Zelibor, retired admiral and CEO of the Space Foundation, a nonprofit that advocates space exploration. “It’s inspiring opportunities for people who may not have thought of it before.” 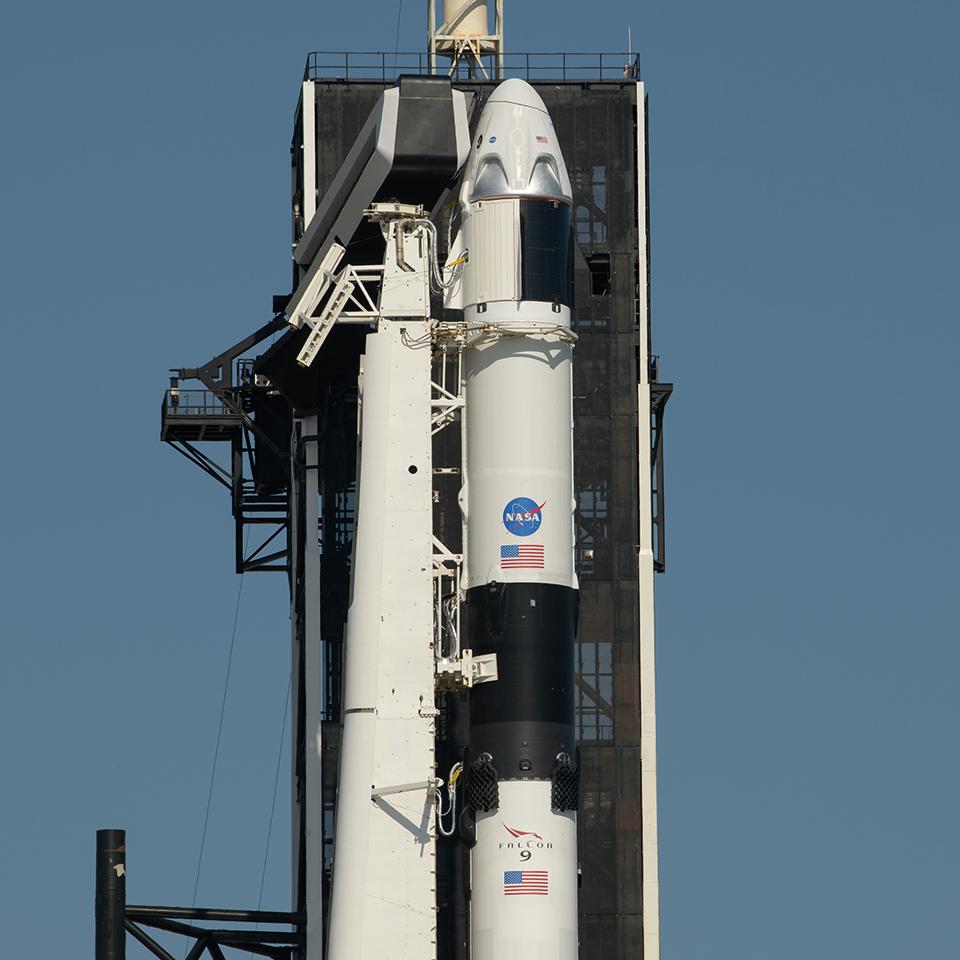 SpaceX’s Dragon capsule is atop a Falcon 9 rocket, upright and ready to launch two astronauts from the Kennedy Space Center on Wednesday.

During the Apollo program, putting Neil Armstrong on the Moon wasn’t just about technology or science. It was about the triumph of capitalism over communism. Or so the rhetoric went. Reality was different. Yes, the Apollo program was built by hundreds of private companies. But its development and direction was centralized by the federal government which spent an estimated $152 billion in today’s terms to put a man on the moon. Space would be the exclusive domain of big government through the space shuttle program in the 1980s.

This was galling to many space enthusiasts, whose passion was nurtured on science fiction stories by the likes of Robert Heinlein, who portrayed a future in space driven by capitalists. When the Cold War finally ended in 1991, entrepreneurial opportunities in the final frontier did finally begin to open up — ironically, within the former Soviet Union. 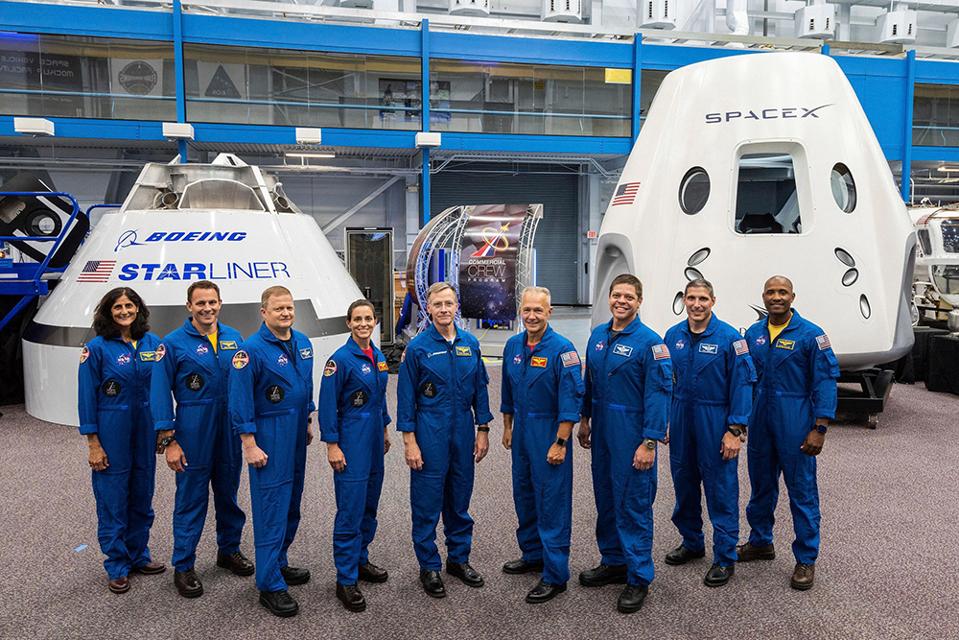 NASA selected both Boeing and SpaceX to ferry astronauts to the International Space Station. The combined value of both contracts is over $6 billion.

“It was the Russians that took the first steps in commercial services in space,” says Jeffrey Manber, a long-time space entrepreneur and CEO of Nanoracks. “Because of their economic collapse, they made a decision that their world-class markets — whether it was airplanes with Aeroflot, or the Bolshoi Ballet or space — had to stand on their own.”

Manber served in the Reagan Administration in the 1980s, where he’d helped to establish the Office of Space Commerce. In that role, he helped to secure the first commercial contract between the Soviet space agency and a U.S. company. His work in Russia continued after the Soviet Union fell, first by working with Russian space company Energia beginning in 1992. 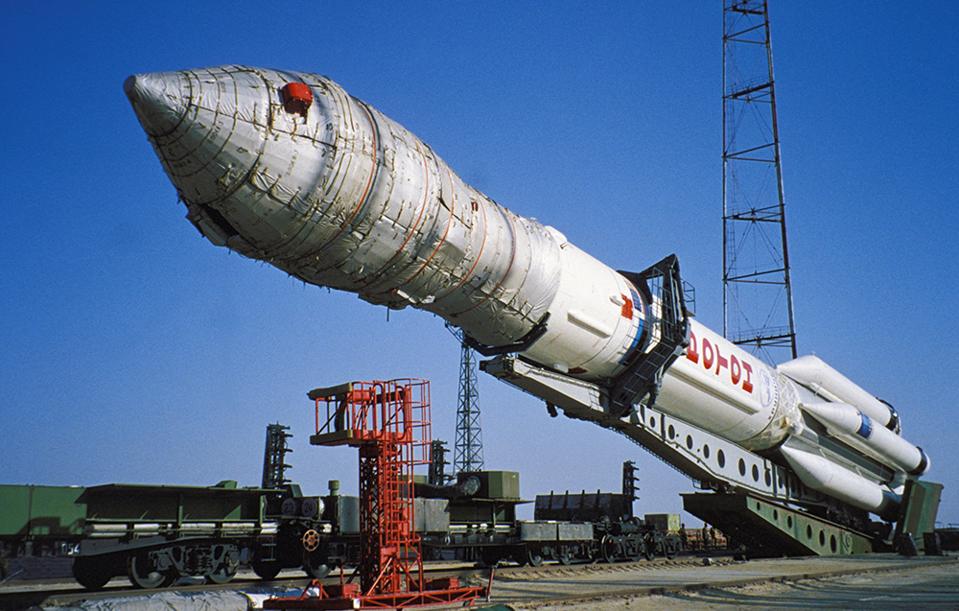 After the Cold War, Russia became a hotbed of free-market space activity.

The emergence of Russian space companies, which were building durable rockets at reasonable price tags, helped energize the marketplace. European and American firms, coddled by the military-industrial complex, pushed back by lobbying their governments to limit the number of Russian launches. A 1993 article of Forbes describing this response to the nascent Russian rocket industry wryly commented, “Isn’t competition good? Not to cartel members it isn’t.” 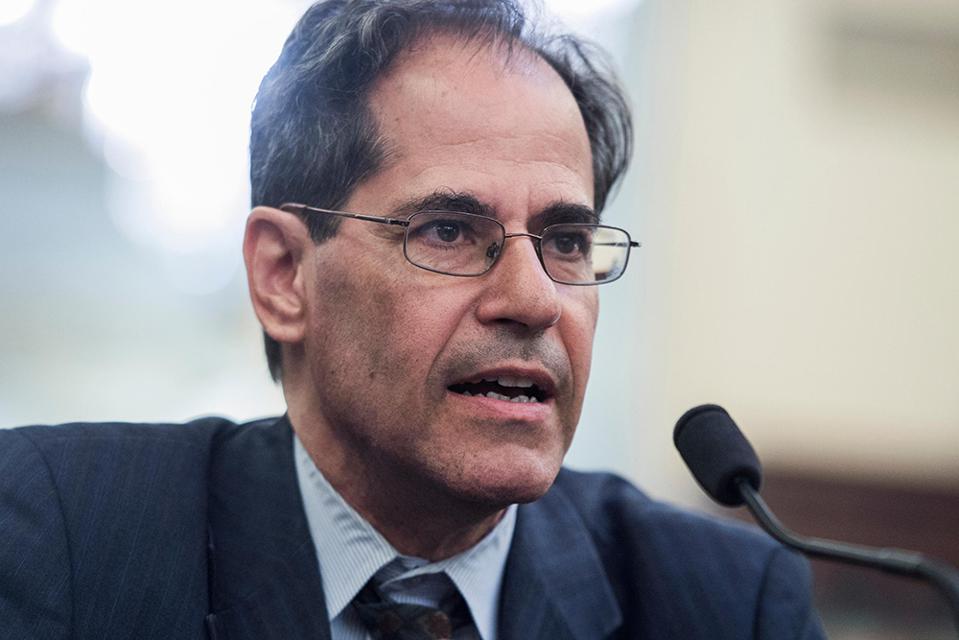 “The United States has taken its rightful place as being the leader of the world” in the space industry, says long-time space entrepreneur Jeffrey Manber.

Meanwhile, the U.S. saw a mini-boom of space entrepreneurs founding rocket companies. These efforts, however, frequently met with resistance from policymakers and legacy industry. Most ended in failure. “There were a lot of political and cultural barriers” to accepting space entrepreneurship in the United States at that time, says Manber.

One notable example of these efforts came from banker and billionaire Andrew Beal, who founded an aerospace company in 1996 with an aim to produce low-cost, reusable rockets. “It’s a big roll of the dice,” he told Forbes in April 2000. He was right. The luck ran out six months later when Beal shut down the company, citing the impossibility of competing with the government-subsidized aerospace industry.

It was in this environment that Elon Musk founded SpaceX in 2003, with the help of money from the $307 million sale of Zip2, the first company he confounded, and the $1.5 billion sale of his second, PayPal. “It was clear there was a need for a reliable, low-cost method of getting to space,” Musk told Forbes at the time.

Musk unveiled a combination of showmanship and execution reminiscent of Howard Hughes. In late 2003, for example, Musk “unveiled” his company’s early Falcon 1 rocket by shipping one across the country by truck, where it was parked in front of the Smithsonian Air and Space Museum. But that was after he’d already successfully tested its engines.

Another milestone for the industry was achieved in 2004 when SpaceShipOne, a spacecraft created by pioneering aerospace engineer Burt Rutan and his company Scaled Composites made two successful suborbital flights. That allowed Rutan to claim the $10 million Ansari XPRIZE, an incentive offered to spur development of private space vehicles. The technology was subsequently licensed by Sir Richard Branson for Virgin Galactic, which aims to fly tourists into space later this year.

Enthusiasm for private space efforts began to bubble up even in Washington D.C. In 2004, Congress passed legislation that helped clear a regulatory path for commercial launch companies. Shelli Brunswick, COO of the Space Foundation, which advocates for space exploration, credits this as a key foundation for SpaceX’s orbital launch this week. “It’s built on the right legislation, the right funding, the right policies over the last 20 years,” she says.

By 2005, NASA started changing the way it did business with the advent of its Commercial Orbital Transportation Services program. Championed by-then NASA Administrator Mike Griffin, this changed the way the agency did business. Rather than taking the lead on engineering and design, the space agency instead simply identified transportation capabilities and invited companies to offer bids on meeting them.

Since 2009, over $30 billion has been invested in over 530 separate space companies.

SpaceX seized the opportunity, winning a contract with NASA in 2006 that provided it with $278 million to develop its Falcon 9 rocket, which successfully launched for the first time in 2010. It signed a separate $1.6 billion contract with the space agency in 2008 to send cargo to the International Space Station, which it began fulfilling in 2012 when its Dragon capsule became the first private spacecraft to dock with the station.

One reason for this success, says Space Angels’ Anderson, is that legacy spacecraft companies didn’t pay much attention to the opportunity. “The big defense contractors didn’t think it was worth their time because the amounts were so small,” he says. “But for SpaceX, a young up and coming, venture-backed company, it was a big amount of money.”

The cultural shift sparked by NASA’s commercial cargo program helped lower other barriers for space entrepreneurs. Jeffrey Manber, for example, returned to the scene with a new company, Nanoracks, which in 2010 installed a research platform on the International Space Station, enabling customers to run experiments in space. In 2014, it installed a deployment system on the station that could be used to put small satellites into orbit.

As the decade moved on, SpaceX began offering launch services to other commercial customers such as telecommunications companies, at drastically lower prices than its competition (including the Russian rocket firms). Between SpaceX and Nanoracks, the cost to space quickly became drastically lower, opening new business opportunities.

“The private sector is now a full partner in opening the frontier of space.”

One beneficiary of these opportunities was Planet, which deployed its first constellation of small satellites to take images of the Earth’s surface for things like oil and gas exploration in 2014. The satellites were launched to the ISS on a rocket under a NASA commercial cargo contract and propelled to orbit from Nanoracks deployment system. The San Francisco-based company now boasts a valuation of over $2.2 billion, according to Pitchbook.

Spurred on this success and others like it, investors have begun to flock to the commercial space sector. According to a report from Space Angels, since 2009 over $30 billion has been invested in over 530 separate space companies. There are several venture-backed space unicorns, including Planet, SpaceX and L.A.-based rocket manufacturer Rocket Lab. 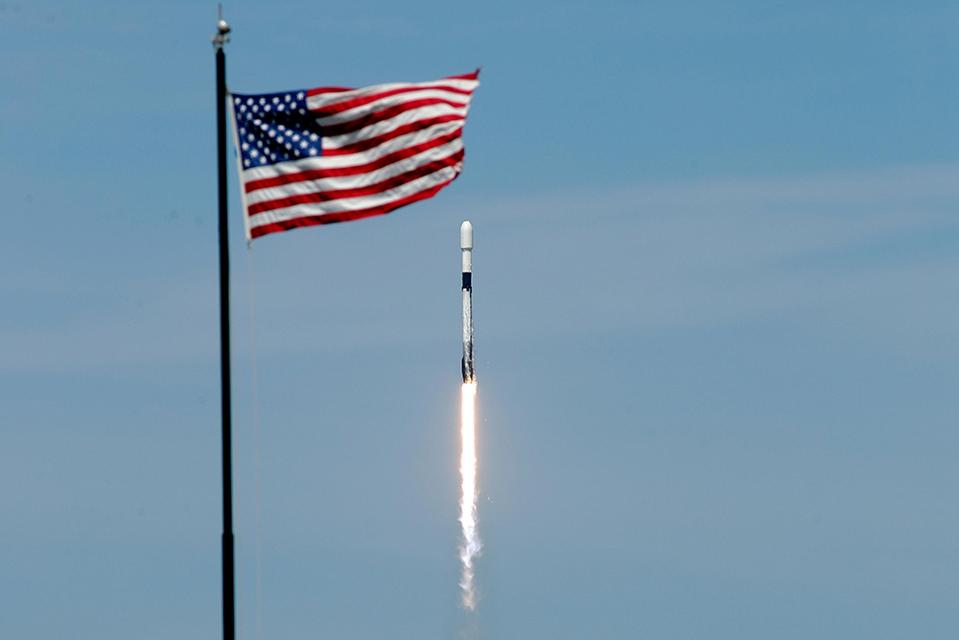 A successful launch Wednesday will mean that NASA will no longer have to rely on Russian spacecraft to take astronauts to orbit.

In 2014, NASA awarded contracts for crewed commercial space flights to two companies: Boeing, the aerospace stalwart that’s been working with NASA since the 1960s – and SpaceX. Combined, the two contracts are worth up to about $6.8 billion. “It was a huge shift in accountability and responsibility to the private sector, which is geared towards speed and cost-effectiveness. These are things that NASA is conscious of, but it’s not really in our core competencies,” McAlister chuckles.

This doesn’t mean that NASA is totally hands off in the development of either company’s spacecraft, McAlister says. But he sees it as a collaboration that combines the best of government expertise with that of the private sector. He acknowledges it hasn’t always been easy.

“This was a huge culture change for us to step back and say we’re going to give some of this control to the private sector,” he says. “And that was very, very difficult for NASA because we felt like we were the experts in this. I think that was the biggest challenge early on.”

For Jeffrey Manber, SpaceX sending astronauts to space “is the exclamation point” on the past few decades of entrepreneurship. “That’s what this mission is really going to bring home to the American public and the world,” he says. “That the private sector is now a full partner in opening the frontier of space.”

Is It The Right Time To Buy Raytheon Technologies After A 55% Fall In 2020?