Breaking
NBA-Backed Saliva Coronavirus Test Gets Emergency FDA Authorization
The Amazing High-Yield REIT Strategy For 7.9% Dividends,...
How To Attract Candidates To Hard-To-Fill Positions
Trump: I’m ‘Ready’ To Take Action On Stimulus...
Apple iOS 13.6.1 Release: Should You Upgrade?
Non-PPP Loan Approvals Continue Slow But Steady Rebound
Here’s How To Stay One Step Ahead Of...
Microsoft Outlook Will Store Contacts’ Blood Group And...
How The US Department Of Health & Human...
Why Do Chinese Companies List Their Shares In...
Can You Get Covid-19 Coronavirus From Food? Frozen...
Winklevoss Twins Tell Bar Stool’s Dave Portnoy To...
How Democrats And Republicans Would Tackle The Enduring...
Berkshire Hathaway Doubles Down On Net Lease REIT,...
70% Of Americans: Ban Foreign Apps
This Week In Credit Card News: Pandemic Brings...
Home Business Elon Musk’s Latest Court Fight Hinges On ‘Pedo Guy’ Interpretation: Twitter Insult Or Defamation?
Business 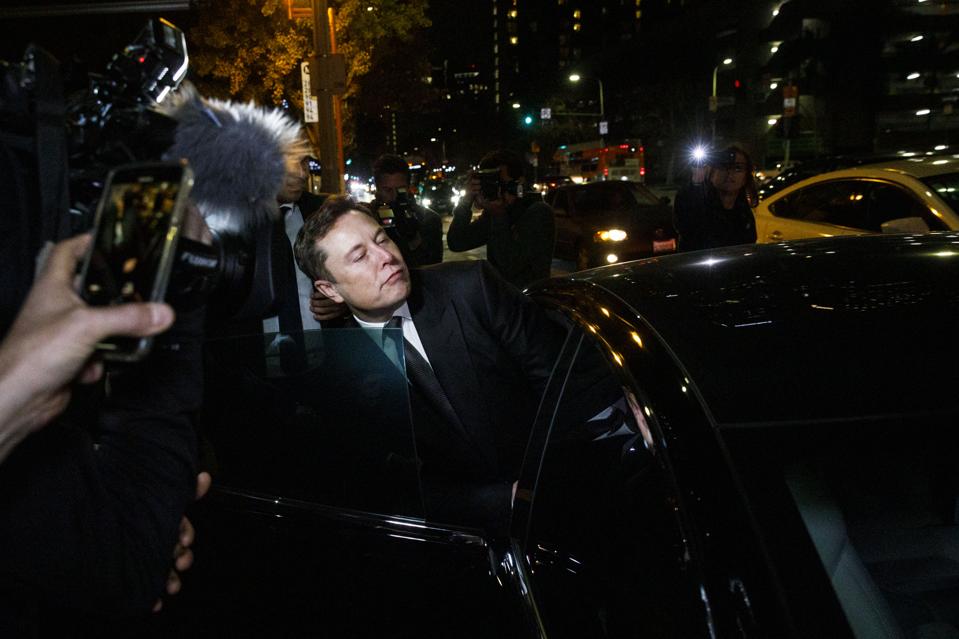 Elon Musk has spent a lot of time in federal court in the past 14 months because of things he said on Twitter, facing off twice against U.S. securities regulators and now hit with a lawsuit claiming he defamed a little-known British citizen who the billionaire tech entrepreneur called “pedo guy” in an irate tweet. He’s trying to convince a jury that that wasn’t an accusation of sexual deviance, just two men trading angry insults.

Musk was on the stand in U.S. District Court in Los Angeles on Wednesday for almost four hours taking questions from attorney Lin Wood, representing Vernon Unsworth, the diver and cave expert who was the target of those tweets. Stephen V. Wilson, appointed by President Ronald Reagan in 1985, is the federal judge hearing the case.

In his opening remarks, Wood said they’ve caused Unsworth to feel “shame, worry and distress at being called a pedophile” and that Musk “failed to use reasonable care to prove those statements were true.” The suit, which Musk characterized as a “shakedown” on Wednesday, seeks unspecified damages.

Unsworth had assisted Thai rescuers in June and July 2018 who were racing to save a soccer team of 12 boys and their coach trapped for days in a flooded cave. Musk and dozens of SpaceX engineers also jumped in to assist, building a mini-submarine to transport one boy at a time through a dangerous, flooded, rocky passage. But by the time he was actually on the scene in Thailand, most of the boys had been rescued and the device wasn’t used.

A few days later, Unsworth infuriated Musk by telling a CNN interviewer the mini-sub was a “PR stunt” with no chance of success and that he could “stick it where it hurts.”

“It was an unprovoked attack on what was a good-natured attempt to help the kids,” Musk, dressed in a somber charcoal suit and tie, told the courtroom. After watching the interview, “I was angry. … What he said was wrong and insulting and I insulted him back.”

Specifically, Musk launched a series of tweets at Unsworth to his more than 20 million followers that concluded with the line, “Sorry pedo guy, you really did ask for it.” 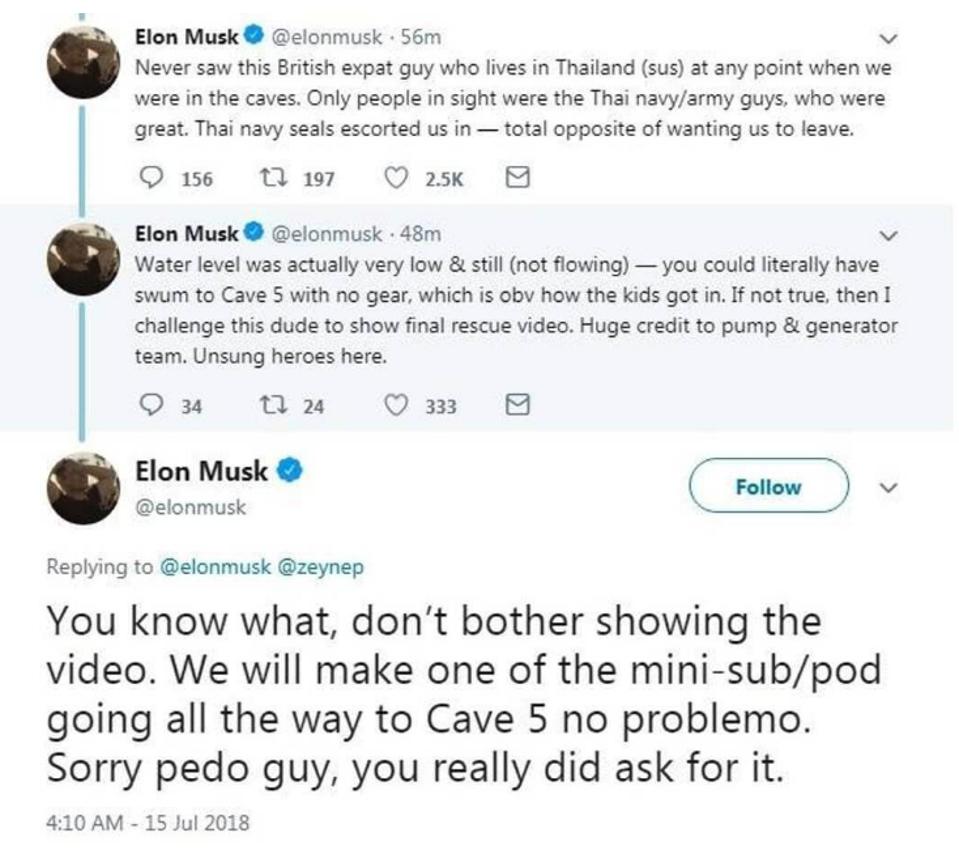 It’s unclear how big a financial penalty Musk could face should he fail to convince the jury of five women and three men that there was nothing defamatory in his tweets. Still, his haste in making rash comments on Twitter that were potentially seen by millions of people underscores the ongoing challenge he has in conforming to expectations for how the leader of a high-profile public company should behave. This is particularly impactful for Tesla, given how reliant it is on him as the company’s core visionary and hero to many investors and brand fans.

Musk and his attorneys argue that a reasonable person wouldn’t assume he was calling Unsworth a pedophile with the Twitter comments.

Unsworth displayed no emotion Wednesday as Musk referred to him multiple times as creepy even after the Tesla and SpaceX CEO conceded there was no evidence of inappropriate behavior or actions by Unsworth.

In defense of his comments, however, Musk argued his use of the phrase goes back to his youth in South Africa, and a belief it just means “creepy guy.” The usage is “quite common across the English-speaking world,” he told attorney Wood during questioning. “Pedo guy just means creepy.”

Musk admitted that when he wrote the tweets he was unaware of Unsworth’s role in the rescue, that it resulted from his familiarity with the Tham Luang caves in Chiang Rai Province where the boys were trapped, his key role in securing assistance in the rescue from British divers and that he’d been asked to do so by Thai authorities.

“I thought he was just another creepy guy the media was interviewing,” Musk said.

“Twitter is a free-for-all for all sorts of things that are true or untrue,” he said, and that idiomatic language is frequently used. “I did not think he meant that I should literally sodomize myself with a submarine,” Musk said, referencing Unsworth’s CNN comments. “Just as I did not literally mean he was a pedophile.”

During questioning by Wood, Musk apologized again to Unsworth, as he did in a tweet last year after deleting his offensive July 15, 2018 tweets.

Musk returns for additional testimony today, and the questioning of witnesses, including Unsworth, is expected to be completed this week. 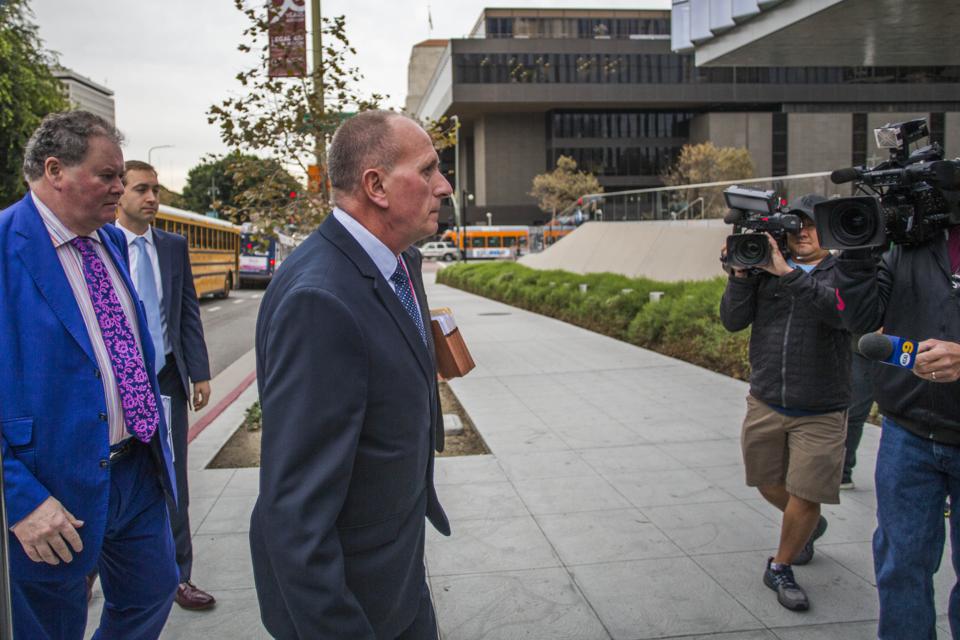 Why Climate Alarmism Hurts Us All