Breaking
Customer Service Recovery: Six Keys To Turn Complaints...
How Becoming A Learning Organization Is Key To...
IRS Increases Enforcement On Cryptocurrency: What This Means...
Optimus Prime Finally Gets The Diaclone Update He...
No, There Isn’t A Black Hole At The...
The Fed Could Be Repeating This Key Mistake...
Japanese Lawmaker Becomes Billionaire By Selling E-Signature Services...
Communication Lessons From The Presidential Debate
4 Tips For Attracting Your First ‘Dream Client’...
Want To Generate More Sales This Holiday Season?...
Your ‘Harvest Moon’ Moment Is An Illusion: Why...
Launching A Startup Comes Down To Making A...
Google Meet’s Unlimited Calling Will Continue To Be...
The Need For Speed-Is Quantum Computing A Good...
Stock Market Crash: The End Game Approaches
Best Video Conferencing Software
Home Technology Elon Musk’s ‘Pedo Guy’ Tweet Isn’t Defamation, Jury Rules
Technology 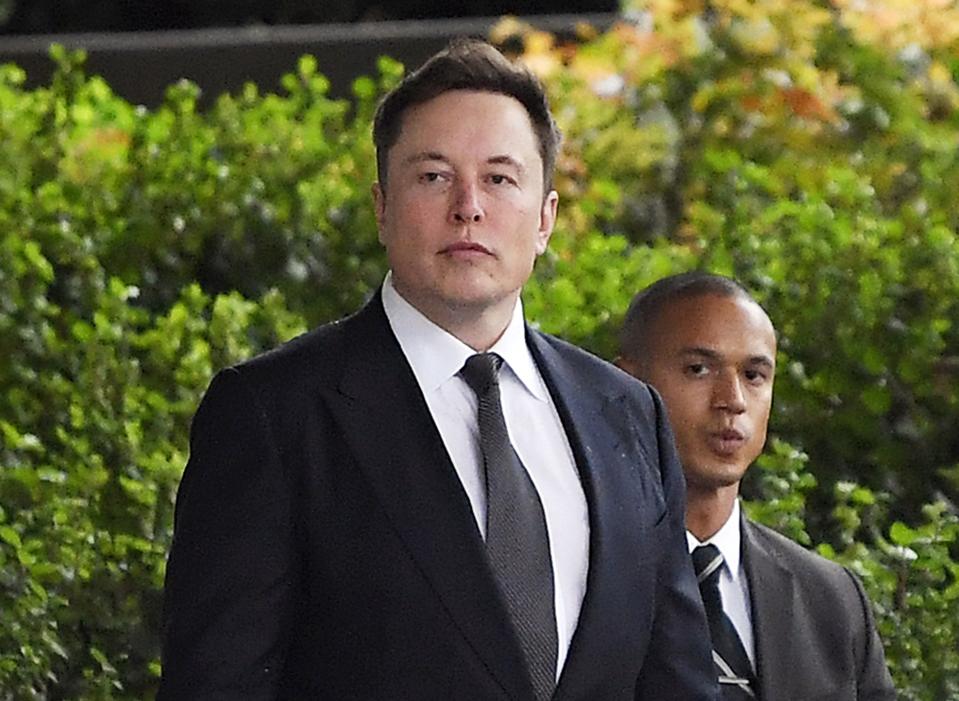 Elon Musk’s irate tweet calling a little-known British citizen “pedo guy” can be described as many things — juvenile, rude, out of line maybe  — but it’s not defamation, a California jury of three men and five women declared Friday. According to the ruling which followed the four-day trial, Musk is not liable for damages.

“My faith in humanity is restored,” Musk told reporters as he left the courtroom. The suit, which Musk characterized as a “shakedown” on Wednesday, sought unspecified damages. Forbes estimates his net worth to be $23.7 billion, as of December 3, 2019.

The billionaire tech entrepreneur spent nearly four hours on the stand in U.S. District Court in Los Angeles Wednesday, holding fast to his conceit that “pedo guy,” his description of Vernon Unsworth, the diver and cave expert involved in the 2018 rescue of a junior soccer team trapped in a Thailand cave system, is not synonymous with “child molester” or “pedophile.”

“Pedo guy just means creepy,” Musk said under oath, a phrase he said that goes back to his youth in South Africa. The usage is “quite common across the English-speaking world,” he told Unsworth’s attorney, Lin Wood. 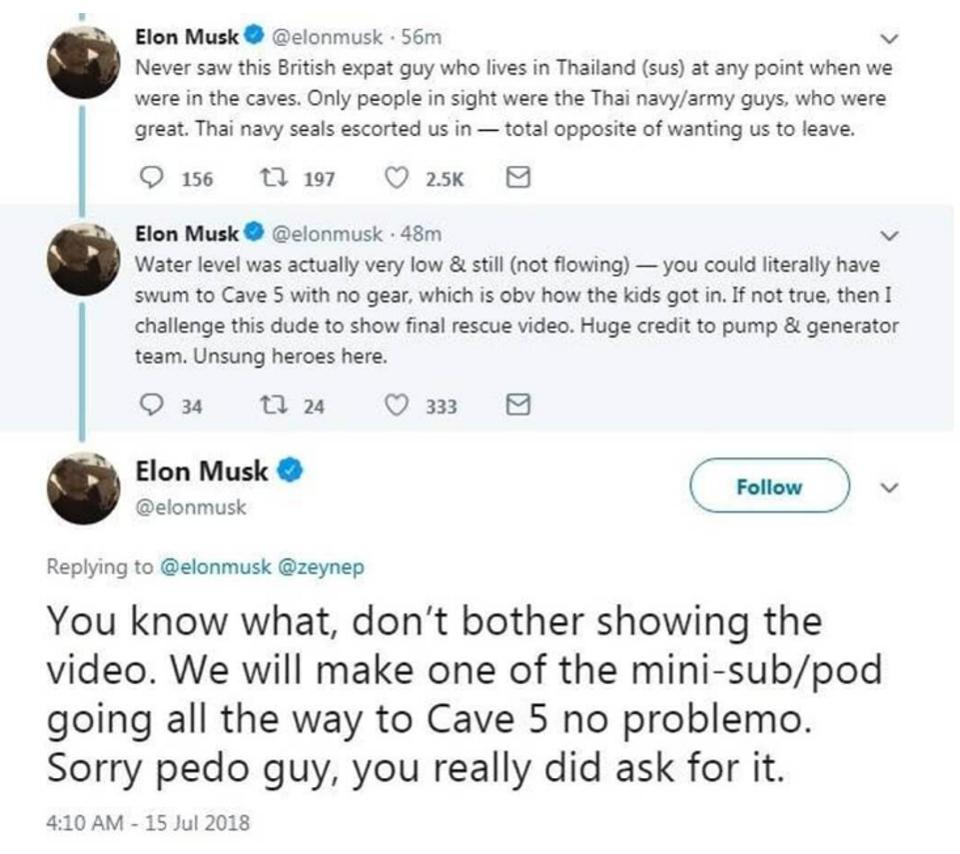 In his opening remarks, Wood said Musk’s insults caused Unsworth to feel “shame, worry and distress at being called a pedophile.” He added that Musk  “failed to use reasonable care to prove those statements were true.”

Musk tweeted the insult in a Twitter string following a CNN interview in which Unsworth called the Tesla and SpaceX CEO’s plan to build a minisubmarine to rescue the 12 boys and their coach a “PR stunt.” In the same interview, the diver suggested Musk “stick his submarine where it hurts.”

Musk’s multi-tweet response, released to his then-22 million Twitter followers,  demonstrated Musk’s ignorance of Unsworth’s identity, his familiarity with the Tham Luang caves in Chiang Rai Province where the boys were trapped, his key role in securing assistance in the rescue from British divers and that he did so at the request of Thai authorities.

According to legal documents filed in the defamation lawsuit filed in September, the billionaire  also hired a private investigator to look for evidence of unsavory behavior of Unsworth and called him a “child rapist” in an email to BuzzFeed News. 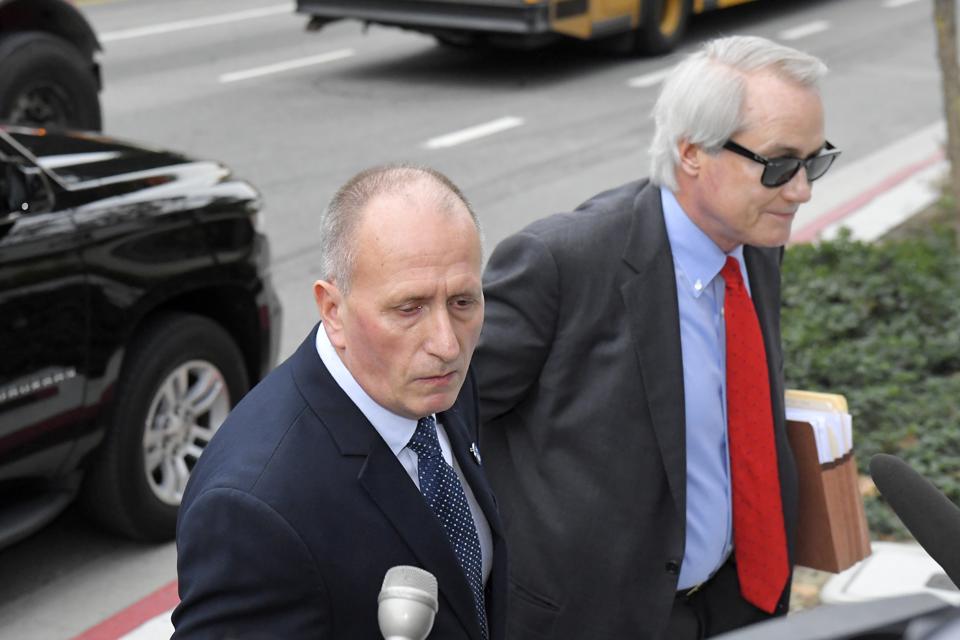 To meet the legal standards set in the defamation case, Musk would need to provide evidence to convince the jury that his insult is a fact. Failing that, the jury must consider whether the insult exhibited “actual malice” equaling defamation.

“Twitter is a free-for-all for all sorts of things that are true or untrue,” Musk said on the stand. “I did not think he meant that I should literally sodomize myself with a submarine, just as I did not literally mean he was a pedophile.”

The jury, in this case, agreed.

How Toys R Us, Camp, and Playseum Will Alter Toy Retailing