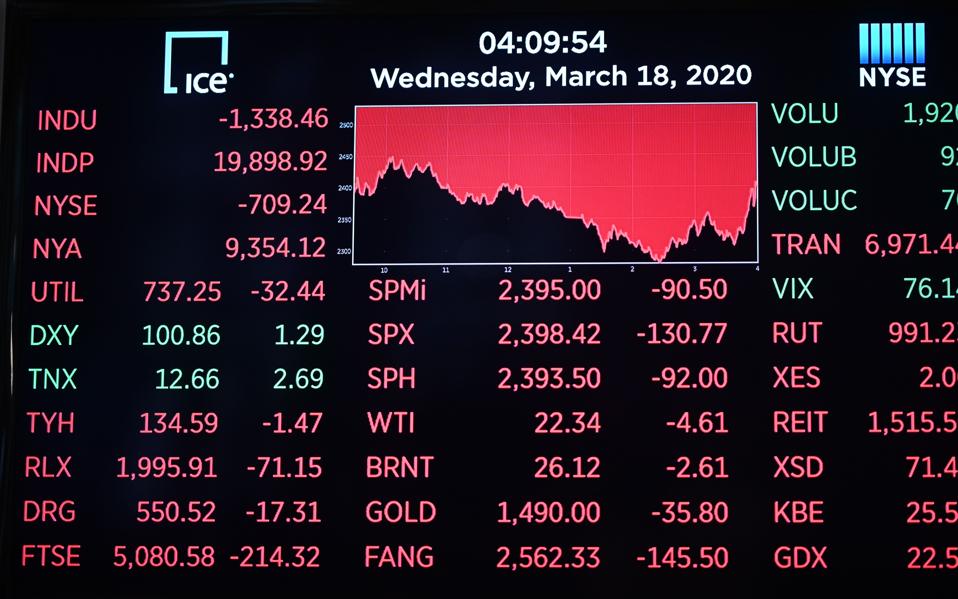 The Dow Index fell another 6 percent yesterday and for the first time since early 2017 closed below 20,000. This current market action has the Dow now losing 33 percent since its February 2020 record in just over a month, or 24 trading sessions. The speed and depth of this equity downturn has astounded even the most experienced of market practitioners. For contrast, during the 2007-2009 financial crisis, the Dow Index lost 57 percent from the October 2007 top to the March 2009 bottom, in a span of 355 trading sessions. The roaring bull market of over ten years from 2009 to now then ensued.

Perspective from the past couple of decades has led investors to expect markets to rebound quickly from a major correction. But it isn’t always so. We seem to have forgotten the worst sell-off of the US stock market, which began in 1929 and resulted in an equity decline of almost 90 percent. It took 23 years to recover. Yes, that was a long time ago and seemingly in a different world. For added context, the crash of 1987 was a 34 percent move from top to bottom over a matter of days. It took two years for the Dow to recover completely.

For a more recent example, we can look to 1989 when Japan’s Nikkei index hit an all-time high of approximately 39,000—today 30 years later, the Nikkei 225 is still trading at approximately 40 percent of the level of its 1989 peak.

The current crisis is different—each one is. Today we are generally at global peace. Oil is going through huge price dislocation and creating a simultaneous energy sector crisis. But the largest factor creating the market action is the personal service sector which has basically been shut down due to the coronavirus, disrupting both the supply chain and the demand chain. And so far, the economic consequences just look dismal.

Unfortunately, all investment models seem to break down during severe market sell-offs. We saw this in 2008 when almost all asset classes declined simultaneously, and we saw it today when even the normal equity safe havens of government treasuries and high-grade corporate bonds also sold off.

The models break because the two important inputs of correlation and volatility are dynamic. Increased correlation between asset classes rise significantly in large down-market dislocations. And increased volatility—the VIX hit a record high of 82 today when a month ago it was 14—increases tail risk.

Where now for investors?

Investors are rushing to cash equivalents. And the Fed is taking actions to support money market funds.

Investor time frame and appetite for risk must first be evaluated carefully—and applied. Then further for consideration—most investors generally will not want to sell equities that are 33 percent down—if you go to cash, you probably will humanly wait for confirmation that the market is rebounding before reinvesting, and thus miss the big rebound.  On the other hand, if you are already in cash, aggressively investing in a market with an 82 VIX is not for the inexperienced nor faint-of-heart.  A final thought: If you possibly have the luxury of a pause, do so—until the fact set clarifies/changes in support of the best actions to take.

The Lockdown Live Streaming Revolution, From The DJing...