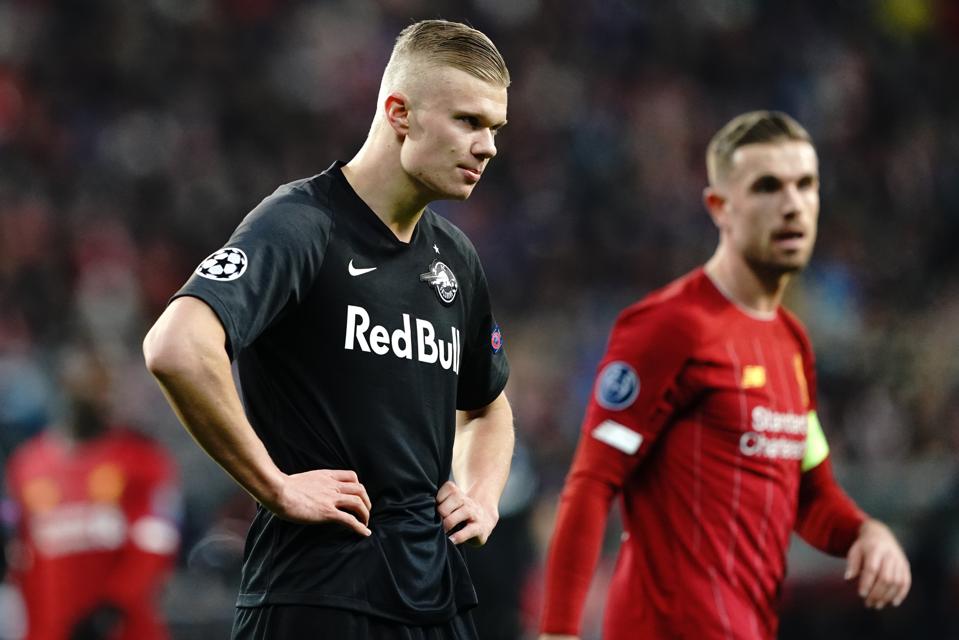 Erling Haaland is the most in-demand forward on the European market at the moment. The 19-year-old striker has scored 28 goals in 22 competitive games this season. His eight goals in the Champions League are the most ever scored by a teenager, and only Robert Lewandowski has been more prolific during the Group stage.

Amidst all the speculations that have linked Haaland with Manchester United, Borussia Dortmund and RB Leipzig, his club faced Liverpool on matchday 6 of the UEFA Champions League.

It was a crucial game for Red Bull Salzburg. Salzburg went into the matchday three points behind Liverpool. But after the 4-3 defeat in the first leg, a Salzburg win in which Liverpool scored less than four goals would have seen the Red Bulls go through.

Labeled the top game by Champions League and the match of the century by the Austrian press, it was indeed a spectacular game. “It felt like a heavyweight fight,” Salzburg head coach Jesse Marsch said after the game.

A game in which Salzburg would ultimately fall to Liverpool. The two teams created countless chances, but Haaland, in particular, left out two opportunities, one in the first half when Alisson Becker was forced into a good save and then in the second half when he missed the goal.

Liverpool were wasteful until the 57th minute when they struck twice in 48 seconds to decide the game. First, Naby Keïta scored with a header after a chipped ball from Sadio Mané. Then Mohamed Salah curved around Cican Stanković to double the lead.

The first goal by Mané and Keïta will highlight Haaland, the sort of development the 19-year-old can expect from playing at Salzburg. Both were at first developed by Red Bull Salzburg. Mané would later join Southampton before moving to Liverpool, and Keïta joined RB Leipzig and then was sold to Liverpool.

Haaland will, without a doubt, have the option to go a similar route. “In theory, a move to Leipzig would be perfect for Haaland,” Jesse Marsch said in a video interview with Omnisport that was widely quoted in Germany. Certainly, Leipzig would be a logical step. 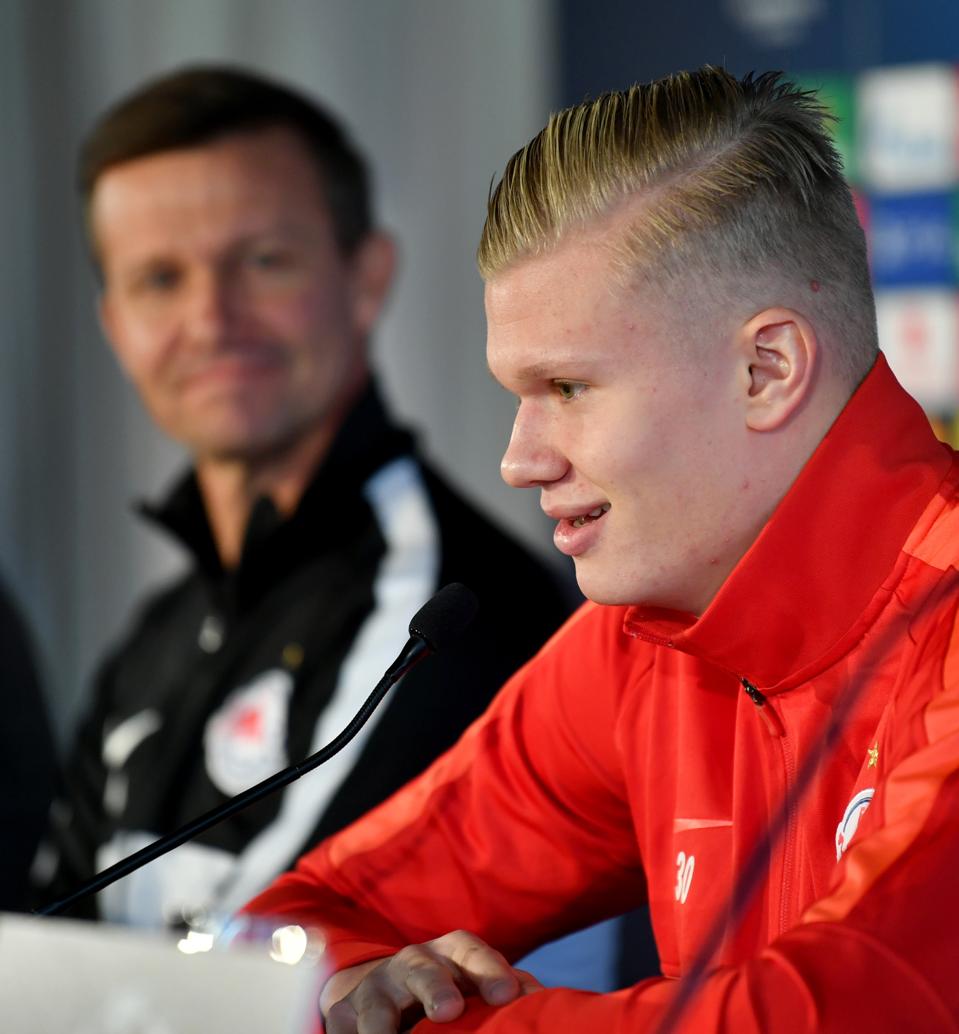 The 19-year-old Norwegian would be the 17th player to move between Salzburg and Leipzig. Both Transfermarkt and Bild reported in November that RB Leipzig head coach Julian Nagelsmann would like to see the Norwegian make a move from Austria to Germany.

“The tactical requirements at [top clubs like] Bayern and Liverpool would be a bit too high for now—after all, he has only played in Norway and Austria so far. And also there for a short time,” said his former coach Alf Ingve Berntsen, who worked with Haaland at Bryne FK, in an interview with Spox.

Nonetheless, there is no doubt that Haaland has made a big step in his development over the last six months under American head coach Jesse Marsch. “My body needed to set in a bit, it was a new training style here,” Haaland said the day before the game. “After the U-20 World Cup I came back sharp and fit,” Haaland added.

It did not quite prepare the Norwegian for what was to come next. “The training sessions,” Haaland said looking at Marsch, who sat right next to him during the press conference, “I have to admit they were really, really, hard.”

Marsch laughed about the statement. The head coach has continued the excellent work started by his predecessor Marco Rose, by focusing on young talent and making them better. Haaland is a great example, during the training session ahead of the clash with Liverpool the two could be seen in quiet conversation.

“I just focus on my job, playing football,” Erling Haaland said. “To enjoy what I do every day and go into it with a clear mindset. My job is to focus on Salzburg to be here as a player.”

“This is not a new theme,” Marsch said about all the transfer speculations surrounding Haaland, whose transfer value is calculated at €30 million (£27 million) by Transfermarkt, this season. “At one point we had a joke that every press conference there is a new team interested,” Marsch said. 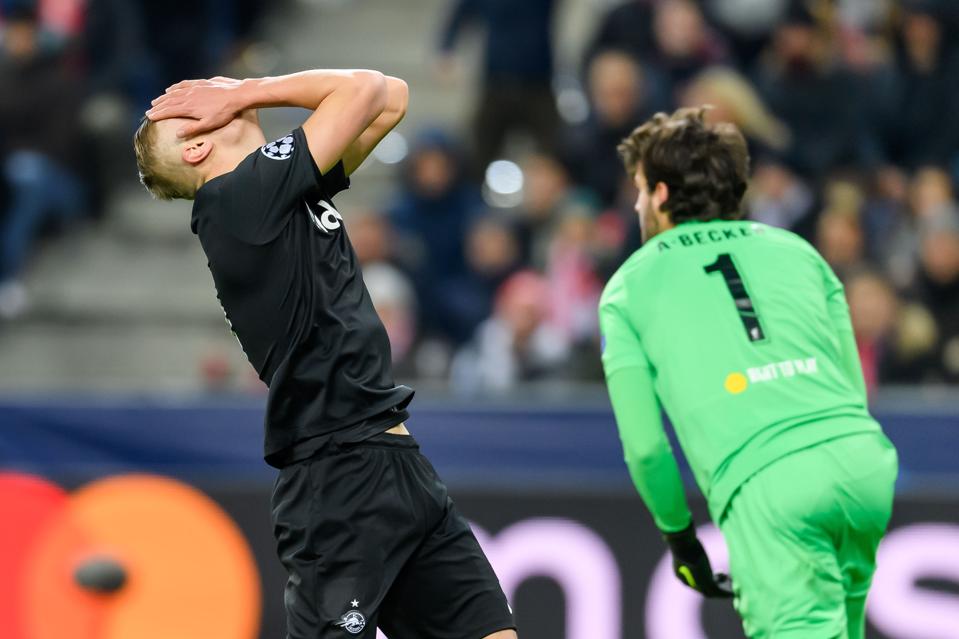 Erling Haaland showed his frustration after missing a big chance against Liverpool. (Photo by … [+] TF-Images/Getty Images)

“It is lovely to be honest,” Haaland said about playing against Liverpool. “I am living the dream. Matches like that are what we play for. It is a dream and I enjoy it.”

But what will happen next? Despite the frustrating exit in the Champions League Salzburg’s players were adamant that they want to put in a good run in the Europa League in the spring and perhaps even win the competition. For Haaland playing at Salzburg on the international level would be important.

Today it was apparent that despite his immense talent, the forward is still raw in his movement and still needs plenty of one-on-one coaching to develop. Coaching that Marsch can provide, but something he could also receive at a Bundesliga club like Dortmund or RB Leipzig.

There is no doubt that Haaland and Marsch have a close relationship. Yet their paths will likely go separate ways, either this January or next summer. Nonetheless, both have been cool about all the speculations surrounding the 19-year-old.

Manuel Veth is the editor-in-chief of the Futbolgrad Network, which focuses on football in the post-Soviet space, the Bundesliga, and football in the Americas. He has also been published in the Guardian, Newsweek, Howler, Pro Soccer USA, and several other outlets. Follow him on Twitter: @ManuelVeth

The Economic Consequences Of CEO Integrity

Britain’s Royals Are In the Midst of Reshaping...