Ethiopia’s Ministry of Transport has published its interim report on the crash of Ethiopian Airlines flight 302, showing that pilots faced challenge controlling the Boeing 737 MAX that are similar to the difficulties faced by pilots on Lion Air flight 302. The report supports the initial findings by Ethiopian authorities last April that Boeing’s Maneuvering Characteristics Augmentation System (MCAS) made it impossible for crew to regain control of the aircraft.

Erroneous readings from an Angle of Attack (AOA) sensor led to four separate nose-down trim activations by the MCAS system, each requiring increasing strength by the pilots to regain control. 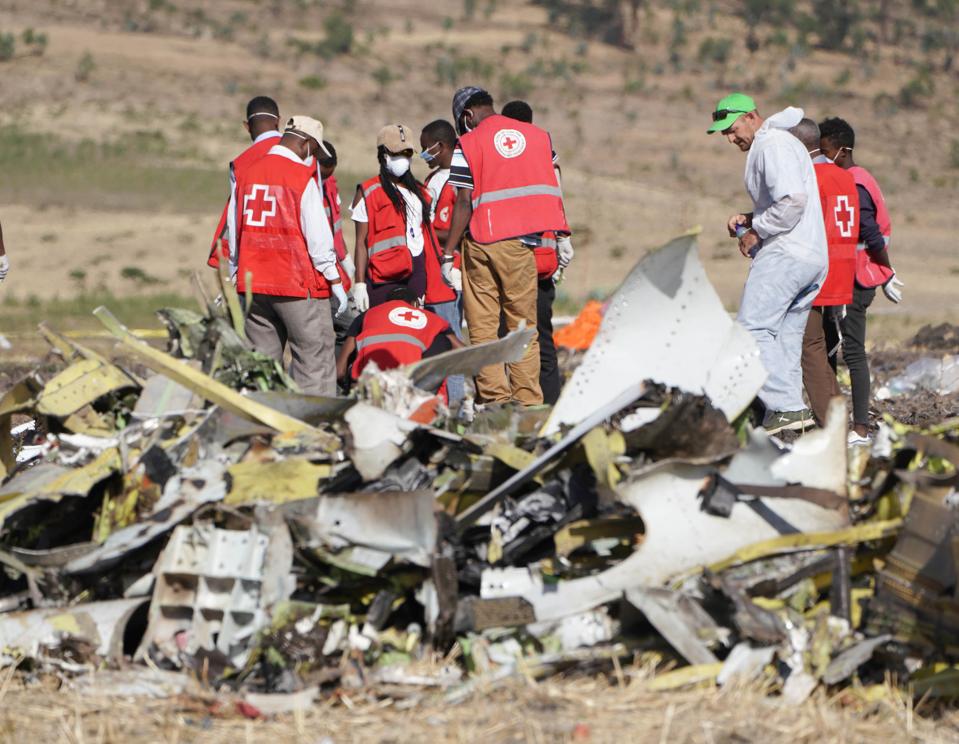 ADDIS ABABA, ETHIOPIA – MARCH 12: Forensics investigators and recovery teams collect personal … [+] effects and other materials from the crash site of Ethiopian Airlines Flight ET 302 on March 12, 2019 in Bishoftu, Ethiopia. All 157 passengers and crew perished after the Ethiopian Airlines Boeing 737 Max 8 Flight came down six minutes after taking off from Bole Airport. (Photo by Jemal Countess/Getty Images) 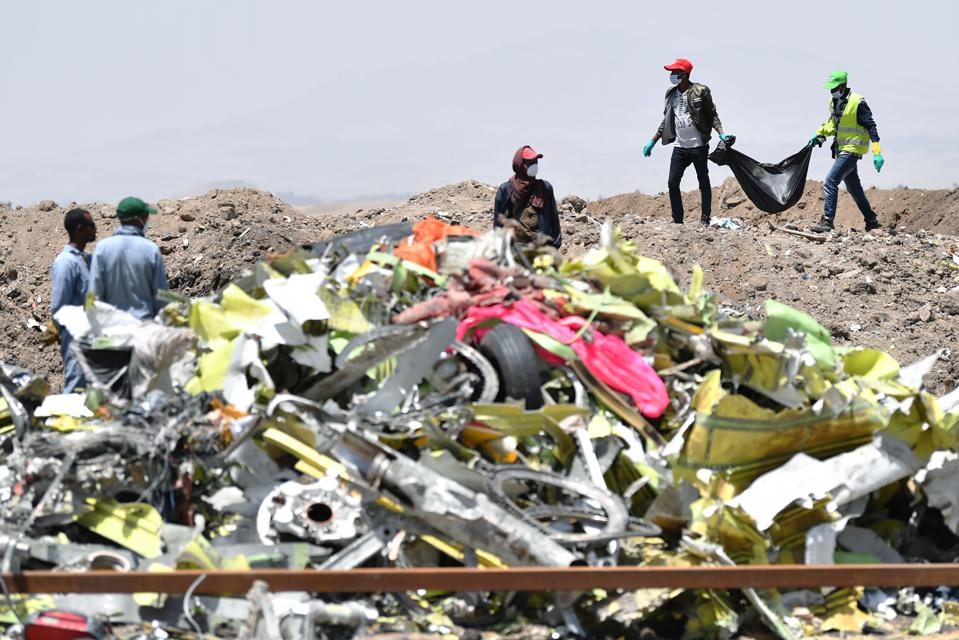 A crew working with an investigative team to clear the site after the Sunday crash of the Ethiopian … [+] Airlines operated Boeing 737 MAX aircraft, carry debris at Hama Quntushele village in the Oromia region, on March 13, 2019. – A Nairobi-bound Ethiopian Airlines Boeing crashed minutes after takeoff from Addis Ababa on March 10, killing all eight crew and 149 passengers on board, including tourists, business travellers, and “at least a dozen” UN staff. Families of the victims were taken to the remote site on March 13, 2019, where the plane smashed into a field with 157 passengers and crew from 35 countries, leaving a deep black crater and tiny scraps of debris. (Photo by TONY KARUMBA / AFP) (Photo credit should read TONY KARUMBA/AFP via Getty Images)

According to the report, the left and right recorded AOA values deviated shortly after take-off. The pilots notified air traffic control that they were encountering a “flight control problem.”

As investigators note, “The left AOA values were erroneous and reached 74.5° while the right AOA reached a maximum value of 15.3°. The difference between the left and the right AOA values was 59° and remained as such until near the end of the recording.”

Investigators found that, “the AOA Disagree message did not appear on the accident aircraft as per the design described on the flight crew operation manual.” Also, the “AOA failure detection feature of the ADIRU (air data inertial reference unit) did not detect the erroneous AOA from the left AOA sensor because it only considers the value to be erroneous when the AOA value is outside the physical range. Thus; SPD (speed) and ALT flag never appeared on the PFD (primary flight display).”

As in the case of Lion Air flight, the repeated activations of the MCAS nose trim made it increasingly difficult for pilots to regain control of the aircraft.

“Following the last automatic trim activation and despite recorded force of up to 180 lbs, the pitch continued decreasing,” the report states. “The descent rate and the airspeed continued increasing between the triggering of the 4th automatic trim activation and the last recorded parameter value. At the end of the flight, computed airspeed values reached 500kt, Pitch values were greater than 40° nose down and descent rate values were greater than 33,000 ft/min.”

Ethiopian investigators also found fault with Boeing’s testing of the MCAS system. Specifically, that the manufacturer failed to test for failure modes “that could lead to uncommanded MCAS activation” including an erroneous high AOA input.

“As a result, additional flight deck effects (such as IAS DISAGREE and ALT DISAGREE alerts and stick shaker activation) resulting from the same underlying failure (for example, erroneous AOA) were not simulated and were not documented in the stabilizer trim and auto flight safety assessment,” they write.

Ethiopian investigators suggested the design of MCAS should include redundancies in the use of data “from both AOA and/or other independent systems.”

They also recommended that regulators certifying the aircraft should “confirm all probable causes of failure have been considered during functional hazard assessment.”

Additionally, Ethiopian investigators found that the difference training from B737NG to B737 MAX provided by Boeing to the airline’s pilots was “inadequate.”

They recommended, “The difference training should also include simulator sessions to familiarize with normal and non-normal MCAS operation. The training simulators need to be capable of simulating AOA failure scenarios.”

Because the report published by Ethiopian regulators is an interim report, the FAA is waiting for a full report to be published before commenting further.

“With the one year anniversary of the loss of Ethiopian Airlines Flight 302 upon us, the professionals of the FAA want to again express sincere condolences to the families of those who were lost,” an FAA Spokesperson told me via email. “We are reviewing the Ethiopian Aircraft Accident Investigation Bureau’s interim report. We believe it’s important to have the full final report to evaluate it against other independent reports so that we might fully understand all of the factors — both mechanical and human — that played a role in this tragic loss of life.”

This follows a scathing report published on Friday by the House Committee on Transportation & Infrastructure which point directly to MCAS as cause of the two accidents and raised questions on the FAA’s oversight of Boeing.

“For two brand-new aircraft, of a brand-new derivative model, to crash within five months of each other was extraordinary and unprecedented in modern times. While multiple factors led to these accidents, both crashes shared a key contributing factor: a new software system called the Maneuvering Characteristics Augmentation System (MCAS), which Boeing developed to address stability issues in certain flight conditions induced by the plane’s new, larger engines, and their relative placement on the 737 MAX aircraft compared to the engines’ placement on the 737 NG,” the House Committee wrote.

The Committee found five key factors contributed to the failure of this aircraft, including “tremendous financial pressure” on Boeing to get the 737 MAX qualified to compete with the Airbus A320neo; “fundamentally faulty assumptions about critical technologies on the 737 MAX, most notably with MCAS”; a culture of concealment at Boeing which “included hiding the very existence of MCAS from 737 MAX pilots and failing to disclose that the AOA disagree alert was inoperable on the majority of the 737 MAX fleet, despite having been certified as a standard cockpit feature.”

The Committee also found that there was “conflicted representation” in the FAA’s oversight structure for Boeing with “inherent conflicts of interest that have jeopardized the safety of the flying public” and that Boeing has excessive influence over the FAA’s oversight resulting in cases “where FAA management overruled the determination of the FAA’s own technical experts at the behest of Boeing.”

As The Stock Market Tumbles, Psychology Research Urges You To Avoid This Common Error

Patriots Committed To More Than Nine Games Of...