Breaking
‘Remnant: From The Ashes’ Is Cheaper Than Ever...
Top Stocks To Buy Today As Markets Rise...
Making America’s Trumps Pay Their Fair Share
Fortnite Season 4, Week 9 Challenges Revealed And...
Yesterday You Were Just A Business; Today You...
Should Your Company Help Get Out The Vote?...
Hyperautomation And What It Means For Your Business
Parker-Hannifin Crosses Pre-Covid Peak But Investors Set To...
6 Reasons Your Cold Messaging Efforts Fail And...
4 Analytics Categories To Track To Improve Your...
Predictions 2021: Cloud Computing Powers Pandemic Recovery
This Is Why You Need A Strategy In...
Economic Research Exposes Significant Flaws In DOL H-1B...
How Breast Cancer Turned This Entrepreneur Into A...
Bitcoin Price: What Next After Fresh Surge Toward...
Societal Platform Thinking
Home Business EU Ready To Commit To Zero Emissions by 2050 Next Week
Business

EU Ready To Commit To Zero Emissions by 2050 Next Week 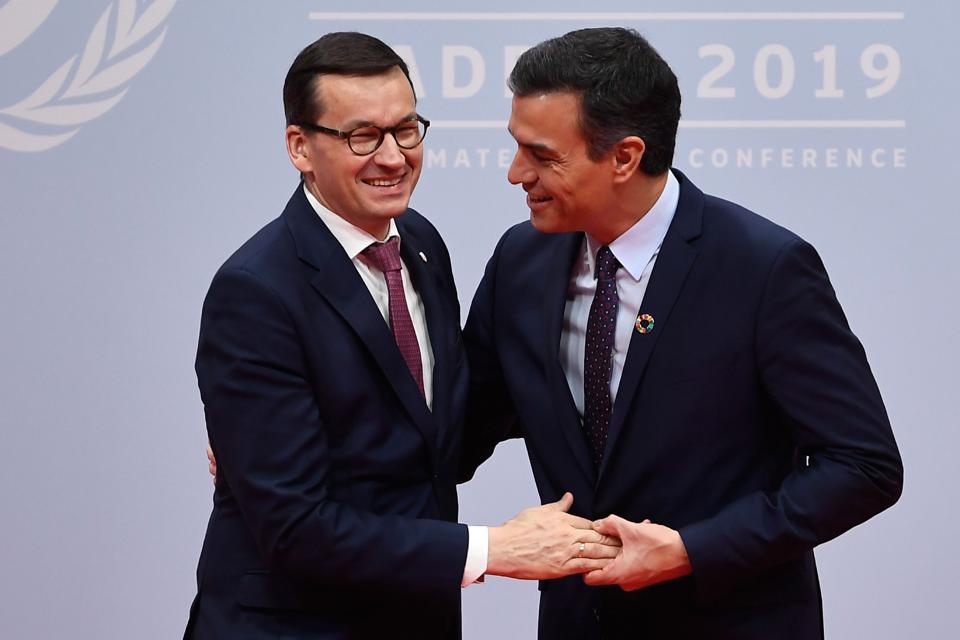 Spain’s Prime Minister Pedro Sanchez is one of the EU leaders trying to convince Poland’s Prime … [+] Minister Mateusz Morawiecki to end his veto on an EU plan to decarbonize within 30 years.

After months of intensive debate, the European Union looks set to adopt a target of reducing greenhouse gas emissions to net zero by 2050 at a summit in Brussels next week. But the failure to put compensation funding in writing could cause things to collapse yet again.

An attempt to get endorsement of the target from all 28 leaders of EU countries in June collapsed after Poland, leading a group of three other Eastern European countries, vetoed. The countries were concerned that such a plan would hold back their economic development and harm coal mining regions.

After months of negotiations to see what could bring Warsaw around, Ursula von der Leyen, the EU Commission president, has made a commitment that looks set to break the stalemate. Holding her first presidential press conference yesterday, she announced the creation of a Just Transition Fund that will mobilize €100 to help spread the burden of the energy transition.

“Europe can be and must be a frontrunner on this topic, but there are concerns about how we finance that,” she said. “It’s true that we will not all start from the same point. That’s why we’re putting forward the just transition fund.”

The money, which will be allocated in the EU’s next seven-year budget, is along the lines of what Poland has been looking for. That Polish Prime Minister Mateusz Morawiecki is now on the other side of a tough election in October has also softened opposition. Being seen to cave in to the EU, a frequent object of vilification for his Law and Justice party, could have been politically damaging in June just months before the election.

Warsaw hasn’t been the only one calling for fund ensuring fair burden-sharing. The yellow vest protests in France have stoked fears about a public backlash to climate measures, and prompted concerns about sacrifices being born disproportionately by certain segments of society.

Show me the money

Four countries wielded their veto power at the June summit – Poland, Estonia, Czechia and Hungary. Estonia dropped its opposition in September. According to diplomatic sources both Prague and Budapest will take their cues from Warsaw about what to do next week. Though Czech Prime Minister Andrej Babiš has said publicly he will veto the plan even if he is the only opponent left, this seems unlikely given he is in the middle of a corruption scandal.

But there could still be a hitch. Though the amount promised by Von Der Leyen should be enough to clinch the deal, the Commission will not have an actual proposal on paper until January. Morawiecki may balk at giving his nod to the target until he can see the promised money in a concrete proposal.

But Von Der Leyen, who will be at the summit, believes time is of the essence. Already the delay in the planned adoption of the target in June meant the EU was not ready to increase its ambition at a UN climate summit in September. It is hoped that an adoption on December 12, one day before the close of the UN climate summit in Madrid, will spur an adoption of a rulebook for the Paris climate agreement by global delegates there.

Von Der Leyen’s college of commissioners will adopt her much-heralded European Green Deal the day before the EU summit in Brussels, on December 11. The adoption of the net zero target by national leaders is seen as a critical part of what could be a big week for the climate.

The Commission is adamant that even if Poland went on with its veto forever, a binding net zero target for 2050 will be adopted.

Technically, unanimous agreement on the target by all EU countries isn’t needed. But it had been hoped that a unanimous political endorsement of the idea by all EU countries could be a first signal to start things moving before actual legislation is adopted. Given the vast scope of the commitment, any dissent would sew doubt about whether the EU is really capable of meeting its Paris Agreement climate goals.

The Commission has penciled in late February as the date to put forward a proposal for a legally binding net zero target for 2050. Such a proposal would only need a majority vote in the European Parliament and Council of 28 governments to pass. Poland and its allies would not be able to stop it.

But legislation could take well over a year to pass, and EU countries will have to submit their long-term plans to the UN for meeting the Paris Agreement goals by the end of next year. With no unanimous political endorsement from the EU national governments in the mean time, the ambition of these Paris Agreements could quickly spiral downward.

Ahead of next week’s EU summit, the Commission is working overtime to convince Warsaw that the just transition fund money is solid and will help coal-dependent regions transition. But negotiations may go down to the wire, and a final decision may not be known until all the prime ministers are in a room together.

Guide To Flying With Children—What Are The Best Airlines To Fly With Kids?