Breaking
In Need Of A Competitive Edge? Look To...
Think Small: Timely Picks To Capture The Reawakening...
Patient Gets Covid-19 Swab Lodged In Her Lung...
Nine Signs You’re Not Being Effective During Your...
Chromebooks Can Now Run Windows 10 – Find...
Will Biden’s Tax/Benefit Plans Help/Hurt You And The...
This Fashion Brand Turned A Stripe Into A...
Shots In The Dark: Why Access To A...
What Building Wealth Really Takes In Business
Building A Circular Economy In New York City...
How To Cast Your Vote Against Election Scams
New Science On Stress: Feeling Your Feelings Works...
Why Now Is The Right Time To Acquire...
7 Obstacles That Prevent People From Starting Businesses...
Booking Holdings Falls; Likely To Remain A Risky...
Apple iPhone Crushes Samsung Galaxy In Important New...
Home Business European Transport At Risk From Climate Change – Report
Business 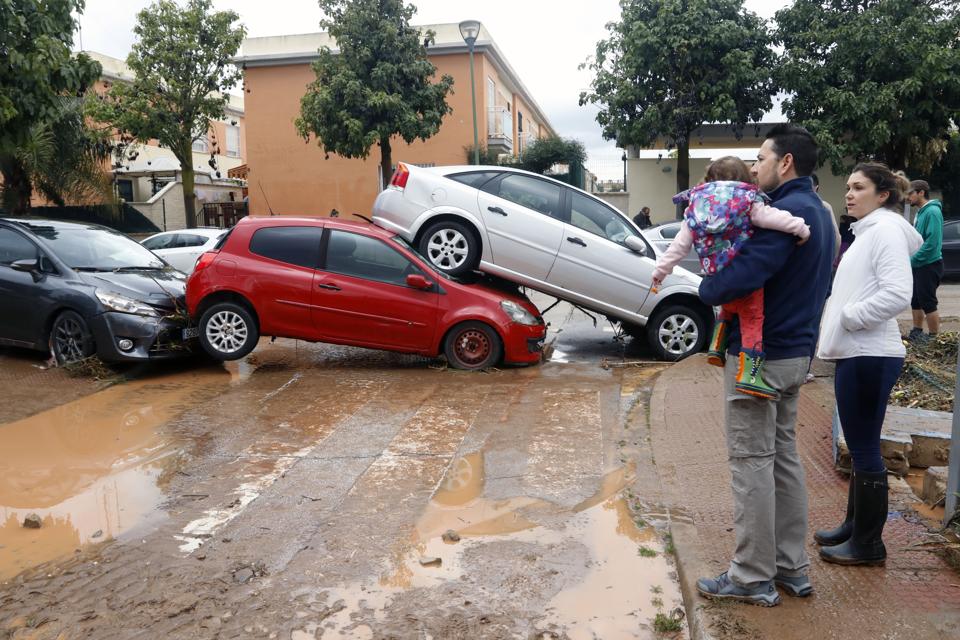 MALAGA, SPAIN – JANUARY 25: A family of the Campanillas district of Malaga is seen next to some cars … [+] after a torrent of water fell as a result of Storm Gloria.

Powerful winter storms have been battering Western Europe over the past month, and some of the most dramatic impacts have been seen in Spain. In addition to airport closures, the country has seen bridges collapse, roads cut off and railways destroyed.

Climate campaigners warn that this type of infrastructure damage to roads, rails, airports and waterways are going to become more common as climate change causes more unpredictable and severe weather. And a new report warns that Europe is unprepared for these changes.

Today the United Nations Economic Commission for Europe (UNECE) issued a first-of-its-kind study on climate’s impacts on international transport networks. The costs associated with addressing these effects is one of the most startling aspects of the report.

In the European Union, future costs for bridge protection against flooding have been estimated at over €500 million per year. In the United Kingdom, which has been especially battered by this year’s winter storms and flooding, costs related to extreme precipitation and floods could increase to up to £500 million per year by the 2040s, up from just £50 million in 2010.

The report maps key areas of the main inland transport networks and nodes, where potential climate risks in Europe region may increasingly be faced. Since the bulk of the transport infrastructure in the region was designed for the climate of the 20th century and has been subject to low public investment in recent decades, identifying where the need will be greatest will be key. That’s why the report recommends gathering more data on the subject that could be used to design minimum technical specifications for particular areas of Europe, based on what they are most vulnerable to.

The report says that most major roads and rail networks in Europe are vulnerable to flooding from high precipitation and extreme storms. Highly populated and economically developed areas in middle and low basins of major European rivers such as the Danube, Rhine, Elbe, Po, Dnieper, Don and Volga are particularly vulnerable.

Rising sea levels and greater wave activity causing erosion will put coastal transport infrastructure at risk. Over 60% of EU seaports may be under high inundation risk by 2100, the report says, causing disruptions to operations and damages to port infrastructure and vessels, especially along the North Sea coast.

Rising temperatures and increased heat waves will affect roads, where pavement damages, damages to bridges and increased landslides in mountainous areas are among key risks. The report recommends that E-Roads in Southern Europe receive special attention for this issue.

For rail networks, potential impacts from all of these weather events include track buckling, slope failures and speed restrictions – infrastructure in the Mediterranean, northern Europe, and Croatia could be particularly vulnerable.

The report recommends that further analytical work be undertaken to form guidelines for the construction of future infrastructure. Minimum technical specifications for particular regions which would make infrastructure more resilient to the effects of climate change could be developed based on this data. These could be administered, the report suggests, by the four UN transport infrastructure agreements administered by the UNECE.

Focusing on Gratitude to Build Relationships