Breaking
Employers: Eight Red Flags You May Not Notice...
Ted Lasso, Other Apple TV+ Shows Arriving Soon...
What Are Working Capital Loans and When Should...
The 10 Biggest Trends in Entrepreneurship to Look...
Clubhouse Has Grown 10X In Two Months. Here’s...
Here’s Why Tyson Foods Stock Looks Undervalued At...
How To Maintain Client Relationships During Long Projects
WhatsApp Is Pushing Ahead With Its Controversial Privacy...
Australia In Talks With Facebook’s Zuckerberg Over ‘Outrageous’...
What To Expect From Deere Stock In Q1?
GME Saga Dissected In The House Committee On...
What’s Next After Mars? The 8 Spectacular Space...
Integrating Life Insurance With Lifetime Income – Part...
How To Invest Your Time Wisely In The...
Spring Forward With These Smart Home Gift Ideas
Hybrid Electric Aviation Pioneer Ampaire To Be Acquired...
Home Finance Even With Blockchain-Friendly Advisors, President Submits Budget Without Support For The Tech
Finance

Even With Blockchain-Friendly Advisors, President Submits Budget Without Support For The Tech

As often happens in Washington D.C., politics are involved, narratives move quickly, and policy positions are formed. With the introduction of Facebook’s plans for a global cryptocurrency last year, the President took to Twitter and with the first public statement on cryptocurrency and blockchain by the world’s most powerful leader, it was clear he was not a fan. 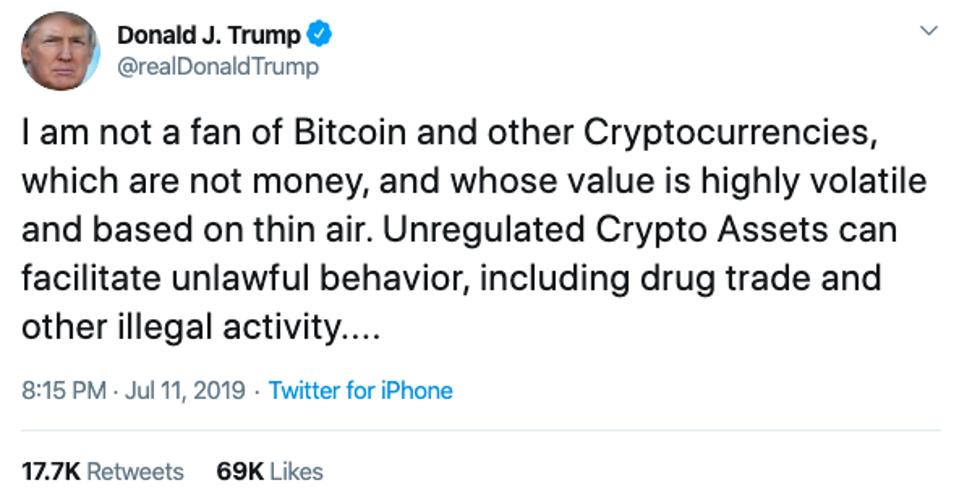 And, as happens in many policy discussions, the idea of cryptocurrency can be confused with the underlying technology. As many have found in discussing bitcoin with policymakers in D.C., blockchain is a concept that runs the risk of being included with crypto – and every negative issue associated with it.

At first glance, it may seem probable that a White House would put forward the President’s Budget that only addresses the negative impacts of cryptocurrency and creates no investments in research or development for blockchain. As major superpowers such as China double down on the technology in public dialogue, as President Xi Jinping noted blockchain ‘ten times as important as the internet’, as well as financially with a blockchain research and development center open since 2017, it may be expected that at least there would be more consideration of how blockchain should be looked at by the U.S.

However, for those in the blockchain industry who had hopes of seeing improvements in regulations or public investments in the advancement of the technology for consumers and societal benefits, there could not be a more appropriate cast of characters who could understand, explain, and advise that investments in blockchain technology be added to the budget, most notably Acting Chief of Staff and OMB Director Mick Mulvaney, and Senior Advisor Jared Kushner. 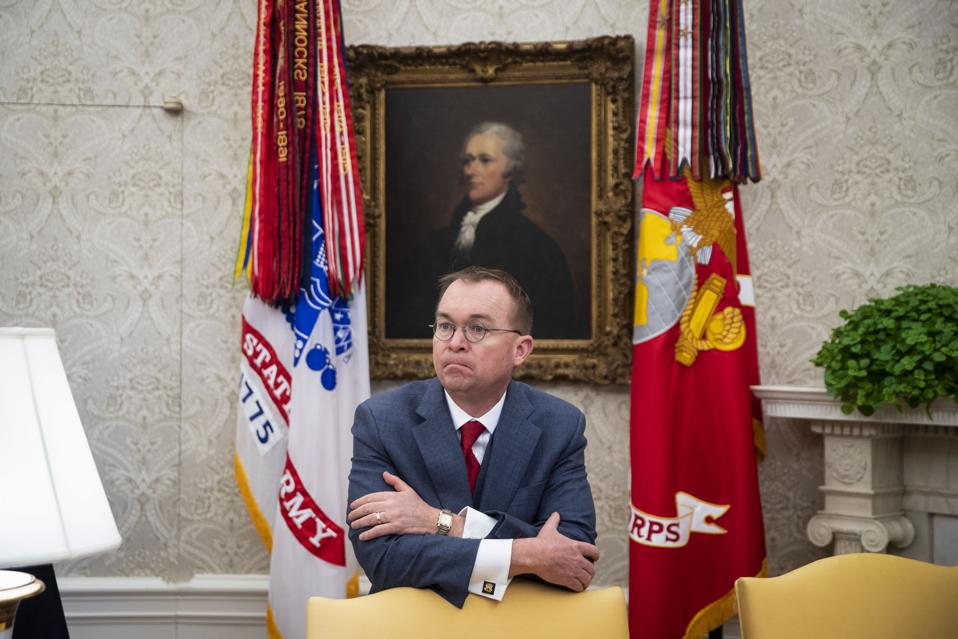 Mick Mulvaney, acting White House chief of staff, listens during a meeting on trade talks between … [+] the U.S. and China in the Oval Office of the White House in Washington, D.C., U.S., on Thursday, Jan. 31, 2019. Chinese Vice Premier Liu He says he hopes to accelerate the 90-day time period the U.S. and China have given themselves to work out a trade agreement. Photographer: Al Drago/Bloomberg

First is the Director of the Office of Management and Budget (OMB) – Mick Mulvaney. Formerly a Congressman from South Carolina, he helped create the Congressional Blockchain Caucus. At the time of his efforts to create interest and attention for the technology in Congress, Mulvaney stated, ‘Blockchain technology has the potential to revolutionize the financial services industry, the U.S. economy, and the delivery of government services.’ So for Mulvaney to become the Director of the OMB, a position that put him in charge of the purse strings for all executive agencies, the blockchain industry had hit a grand slam home run. A little less than two years later, Mulvaney was also provided the position as Acting Chief of Staff. Suddenly he was in the position in the White House most well-known as ‘The Gatekeeper,’ where responsibilities include managing the President’s schedule, overseeing the White House staff, and deciding who is allowed to meet with the President.

As both the Acting Chief of Staff and Director of the OMB, there is perhaps no one else closer to the President who has been pro-blockchain technology that is better positioned to provide line items in the President’s Budget for blockchain.

And as if this is not enough of a pole position, the President’s Senior Advisor and Son-In-Law, Jared Kushner, known as the Trump Administration’s ‘Tech Whiz,’ runs a new Office at the White House known as ‘The White House Office of American Innovation.’ Kushner even owns Bitcoin. This creates an opportunity for President Trump to get a lesson on what blockchain technology is and how it may be of consequence in the U.S. 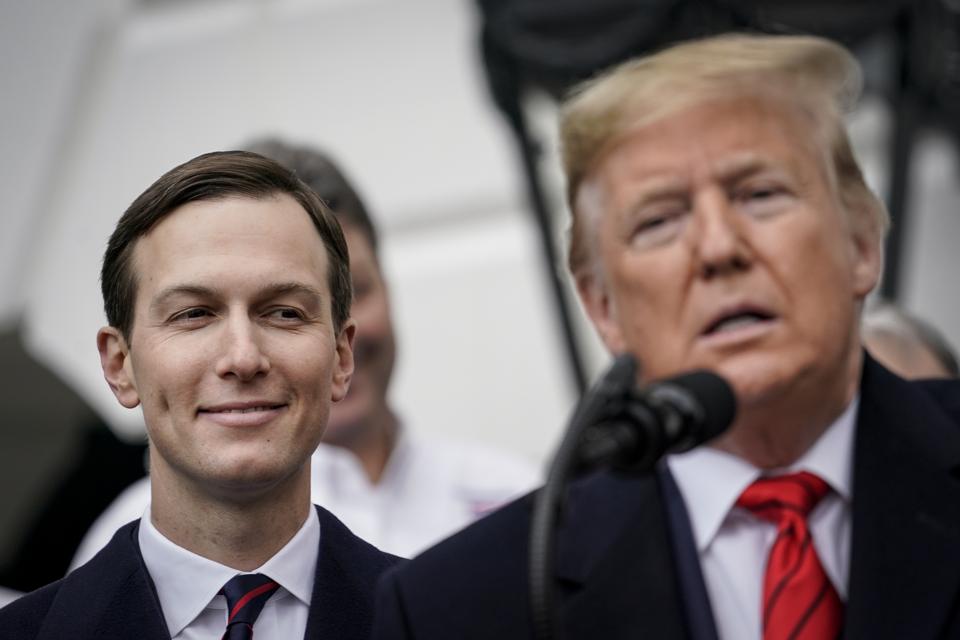 While the President’s Budget leaves out any growth or investment in blockchain technology, the Administration does speak to a move of the U.S. Secret Service back under the authority of the U.S. Treasury, with the justification related to how ‘Technological advancements in recent decades, such as cryptocurrencies and the increasing inter-connectedness of the international financial marketplace, have resulted in more complex criminal organizations and revealed stronger links between financial and electronic crimes and the financing of terrorists and rogue state actors.’

Kushner and Mulvaney will still have a chance to move the blockchain needle in the administration. Additionally, Presidential Candidate Mike Bloomberg’s recent calls for a ‘FinTech Sandbox’ and clear regulations for the multi-billion cryptocurrency industry will reverse the tide.

However, even in Bloomberg’s plan, there still lacks the push for public investments into the technology – which leaves the U.S. vulnerable against countries such as China and Russia who are all-in on blockchain technology. Hopefully the Godfather of Blockchain in Congress, Mick Mulvaney, and the Tech Whiz Of the White House, Jared Kushner, can find time in the President’s schedule for a reconsideration or advancement of policy initiatives to promote blockchain such as including reconvening a Blockchain Summit at the White House.

How To Answer ‘Tell Me About Yourself’ In A Job Interview