Breaking
How To Get Your Startup Business Off The...
How To Create A COVID Safe Construction Site
How to Make a Good First Impression at...
Covid-19 Death Toll In U.S. Passes 200,000
Apple iOS 14 Has 25 Great Secret Features
5 Decisions That Will Increase Your Chances Of...
Coronavirus Is Shaping Up To Be Very Bad...
TikTok: Why Is Everyone In A Tizzy?
Is It Time For A Bank For Women?
As Israel Locks Down, Its Health Tech Sector...
Buying The Bulge Is Dangerous
5 Strange Things Happening Right Now In The...
The Best Blogging Platforms (In-Depth Review)
How Will The Coronavirus Impact Your Finances?
How Xbox Series X Will Attempt To Avoid...
Virgin Orbit Seeking Over $100 Million As ‘Jaw...
How To Develop The Confidence To Launch A...
USPS Covid-19 Coronavirus Plan To Send Every Household...
Android Circuit: Mysterious Samsung Galaxy, Google’s Next Pixel...
Home Technology Evoking Greta Thunberg, Ban Ki-Moon Gets Angry, Calls For Lifestyle Change
Technology 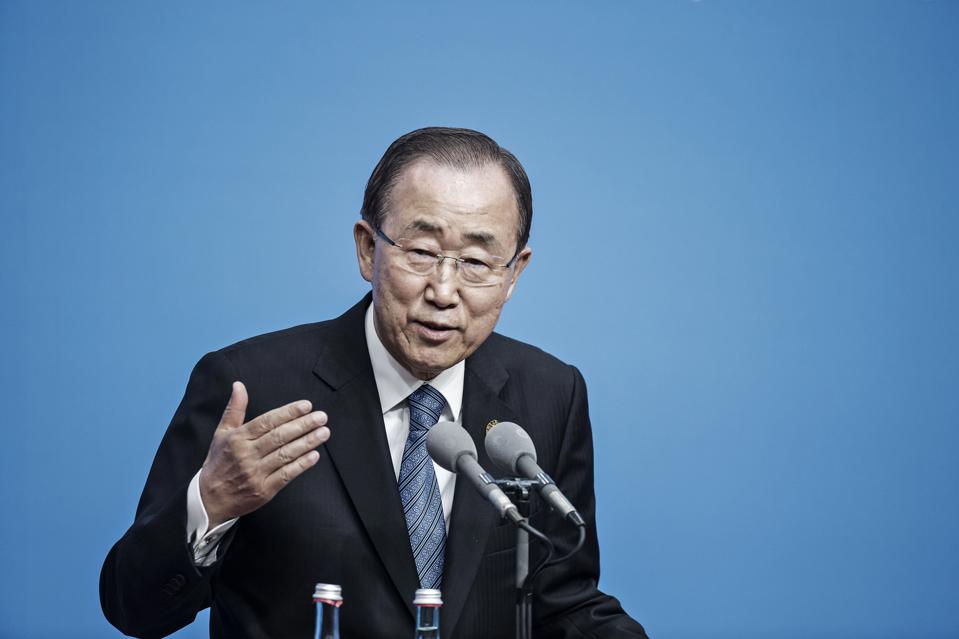 Ban cited youth activists Greta Thunberg and Severn Cullis-Suzuki as his inspiration, and like them, he called for changes in individual lifestyles and the world’s economic system.

“I cannot but express my deepest regret and even anger about what President Trump has decided to withdraw from this Paris climate change agreement,” Ban said at a forum hosted by the Brookings Institution in Washington D.C.

The United States was “the champion” under President Obama, Ban said, in mobilizing a sense of unity and bringing reluctant nations like China and India to the table—“and that is the reason why we now have this Paris Agreement.”

“Even economically, it doesn’t make any sense.”

Having served as secretary general from 2007 to 2016, Ban now chairs the Global Green Growth Institute, which promotes a marriage of environmental sustainability and economic growth. Thunberg has criticized such initiatives:

“This is not primarily an opportunity to create new green jobs, new businesses or green economic growth,” she said during her U.S. visit in September. “This is above all an emergency, and not just any emergency. This is the biggest crisis humanity has ever faced.”

Nonetheless, Ban cited Thunberg and Severn Cullis-Suzuki, who was 12 when she spoke out at the UN Earth Summit in Rio De Janeiro in 1992, as the inspiration for the new urgency in his tone.

And like Thunberg, Ban called for changes in lifestyles and economics away from consumption. People have been abusing the privilege of nature, he said.

“Dealing with climate change also includes adapting to a new way of life. The warming planet means that we can no longer maintain the way we live, the way we work, the way we consume, and the way we produce. We have to change our behavioral pattern. It’s not only industries where they emit the greenhouse gas emissions. It’s from our own lives, lifestyles. We also create a lot of problems.”

The question of how to change lifestyles was fielded by Ban’s co-presenter, former Irish President Mary Robinson, now chair of the Mary Robinson Foundation for Climate Justice, who suggested three categories of change:

3. “And the third thing—and actually this is the most important—we have to imagine this world that we need to be hurrying towards. Because as we’ve heard—we’ve both been saying this—we have 10 years, you know, we have to be in a much different place. We have to have a 45 percent reduction in global emissions by 2030. That’s a very short time, so that’s why Greta Thunberg is so frustrated in Davos. She says there’s lots of talk, but there’s no action. We’re not seeing that bend at the curve but in order to get a sense of intuitiveness about it, we have to imagine this world. It would be a much healthier world.”

Does Your Resume Pass The 60 Second Test?